The Field of Blood: The Battle for Aleppo and the Remaking of the Medieval Middle East 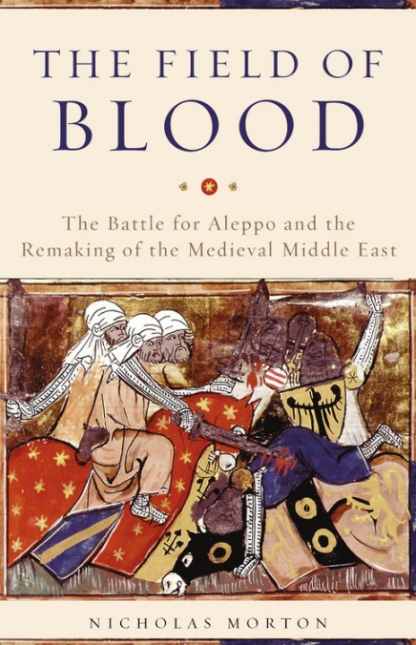 When Gary Johnson, the Libertarian Party standard-bearer, became the butt of jokes by asking “What is Aleppo?” during the 2016 presidential campaign, he suffered the kind of snark that can only come from people whose knowledge of the besieged Syrian city was just a few newspaper headlines more advanced than his own. Americans, like many people, seem to learn about world history and foreign cultures through the wars we become entangled in.

Syria’s ferocious civil war, with its confusing cast of mercurial actors, calls to mind the chaotic warfare that shaped this same land in the 12th century. This was a pivotal period between the first Crusade and the second when the Franks occupied Jerusalem but failed in their attempt to consolidate control over the entire region.

Nicholas Morton masterfully brings this period alive — and delivers some pointed lessons for our own times — in his lively and compact historical survey, The Field of Blood: The Battle for Aleppo and the Remaking of the Medieval Middle East.

Morton is a senior lecturer at Nottingham Trent University and the author of three previous books on the Crusades. At the center of his new book is the struggle to take Aleppo, a battle the Franks lost but, Morton argues, could have won, setting in motion the decline and eventual failure of the Crusader states in the Levant.

But Field of Blood is much more than a military history. It is an absorbing treatment of the inaugural years of the Crusader states that deftly explains the complex cultural and religious milieu they inhabited, and ultimately illustrates how the European invaders failed.

Morton’s skill as a writer is what makes Field of Blood succeed. He is sure-footed in his sense of when to pause and provide background. (How, exactly, could so few Frankish knights defeat so many opponents? Why was the call for jihad so thrilling in some instances and such a dud in others?)

Each time questions like these pop up in the generalist reader’s mind, Morton is at hand with a concise explanation. His narrative is delightfully but judiciously punctuated with telling details: It seems a gung-ho Norman knight named Hugh wished to make a point with a single punch to an envoy’s horse, killing the animal instantly. Nine centuries later, Hugh’s point is duly taken.

But Morton succeeds more broadly by taking some risks as a writer that he pulls off nimbly. He slyly blends contemporaneous legends with his historical narrative, not as a way of spicing up actual events with prettier fictions, but as a lesson in understanding the cross-cultural dynamics of the era as revealed by its myths.

He pauses late in the book to fly over the region from north to south, following the timeless migration path of the white stork, an exercise that ties together all that came before into a literal overview of the matrix of human activity that characterized the area in medieval times. Each of his subtle deviations from the narrative is welcome and delightful.

Morton is clear-eyed about the religious dimensions of the extended conflict. He makes it plain — as an historian of the period is obligated to do — that it is dangerously wrong to imagine the Crusades as a straightforward religious war between Muslims and Christians.

The shifting alliances between and among Franks, Turks, Arabs, and a host of other ethnicities, or between and among various Christian and Muslim groups, are the most compelling constant in the book and seem to weirdly mirror the confusing headlines that emerge today from Lebanon, Syria, and the border regions of Iraq and Turkey. The author shows that the religious rationales commonly cited today to explain historical events tended to develop after the event rather than before.

The one mildly controversial assertion Morton leaves us with is that the conventional wisdom that the Crusader states were doomed to fail is an illusion. He makes the case that if the battle of Aleppo had gone another way, or if the Franks had succeeded in controlling Damascus or Cairo, they could have dominated the region for centuries.

Given that this was plainly all the warlords’ objective at the time and remains the objective of modern-day combatants, it is a persuasive argument. The Kurdish warlord Saladin, who appears at the end of the book, finally succeeded in bringing the major cities of the region under his control and was eventually able to marshal this revenue stream to wrest Jerusalem from the Crusaders.

The great lesson of Morton’s book is that whoever is clever and ruthless enough to string together the region’s major cities can gain the economic momentum required to run the table against a multiplicity of rivals.

Then, as now, the passions of ethnic or religious narratives might be leveraged as a tactic but might just as easily be discarded if the circumstances shifted. History can be weaponized, as Morton points out, but, in the author’s capable hands, it can also be used to illuminate and defuse.

Noah Kennedy is a San Francisco Bay Area writer and author of The Industrialization of Intelligence: Mind and Machine in the Modern Age. He is currently at work on a nonfiction book about the political origins of the religious traditions of the Abrahamic faiths and blogs on the topic at noahkennedy.net.