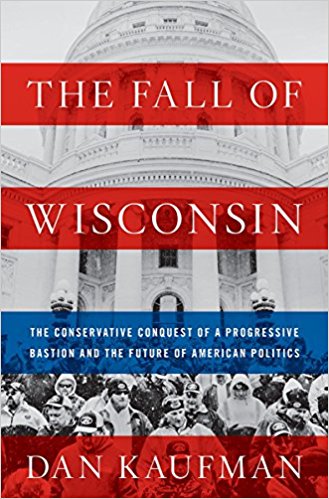 Between 2010 and 2016, the previously liberal state of Wisconsin fell to a conservative takeover that reversed more than a century of progressive policies in the state. How did this happen? What does it foretell for America as a whole?

Journalist Dan Kaufman reported for different news outlets on the transformation as it unfolded and has now written a close-up account of the dramatic shift in The Fall of Wisconsin: The Conservative Conquest of a Progressive Bastion and the Future of American Politics.

Kaufman argues that the conservative conquest of Wisconsin was planned, well-funded, and strategic. First, conservative think tanks targeted the state because it represented the very ideal of American progressive thought — the “Wisconsin Idea” — its tenets firmly ensconced in federal projects from the New Deal to the Great Society and the environmental protections laws of the 1970s.

Second, conservative funders including the Koch brothers stepped forward with unprecedented resources to support this project; by chance, their hands were strengthened in the middle of the fight by the Supreme Court’s decision on Citizens United v. FEC.

Third, Scott Walker, who became governor of the state during the 2010 anti-Obama Tea Party wave, espoused a divide-and-conquer strategy to end collective bargaining for public employees in the state and started the process of dismantling Wisconsin’s progressive coalition. When labor leaders and the state’s Democrats sought to recall Walker using an 80-year-old state law, they failed. Twice.

Almost every example of Wisconsin’s current fall in the book becomes more remarkable as Kaufman time travels, sometimes across many pages of text, to the state’s glorious history of progressive politics. From the Scandinavian and German settlers who brought with them old-world communitarian ways to “Fighting Bob” La Follette, a governor and U.S. senator from the state who forged “the Wisconsin Idea,” to Gaylord Nelson, also a senator who helped protect large tracts of northern Wisconsin from rapacious mining in the ‘70s and ‘80s, it might appear that Wisconsin’s politics were predestined to be progressive.

This trip down memory lane is somewhat forgetful, however, because Wisconsin also gave the country Joseph McCarthy, the most notoriously conservative U.S. senator of the 20th century.

Kaufman is lyrical in his description of the resistance to the conservative conquest. He chronicles the travails of Randy Bryce, an ironworker and charismatic union leader who has been fighting a pyrrhic battle ever since Walker proposed the union-gutting law known as Act 10. He elucidates the wisdom of Mike Wiggins, a Native-American leader who has been trying to save tribal rights on lands where the state’s Republicans want to allow mining for rare metals.

He writes of the higher loyalty of Dale Schultz, a former state Republican senator who stands up to his party’s predation of the people. And he follows indefatigable characters such as community activist Lori Compas, Democratic state legislator Chris Taylor, and tribal leader Joe Rose as they carry the resistance on their broad shoulders.

The Democratic Party, on the other hand, abandoned Wisconsin, writes Kaufman. In 2011 and 2012, when state activists were mounting recall challenges against Governor Walker, Republican legislative leader Scott Fitzgerald, and others, President Obama was pointedly missing. Obama won Wisconsin in 2012 despite those conservative victories in the prior years, which led Hillary Clinton to take Wisconsin for granted four years later.

Kaufman uses the breaking news of Clinton losing Wisconsin to Donald Trump both as a marker for the unexpected results of the presidential elections in 2016 and “the final stage of Wisconsin’s dramatic transformation from a pioneering beacon of progressive, democratic politics to the embodiment of that legacy’s national unraveling.”

With Wisconsin’s fall, writes Kaufman, child poverty rates are up, wages are stagnant, K-12 and higher education spending has been hammered, and water quality is poorer. The state’s public employees pay more for healthcare, have lost pension benefits, and cannot negotiate collectively. Wisconsin passed $8 billion in tax cuts that have left a $2 billion budget deficit that the Republicans now want to meet with further cuts.

In contrast, neighboring Minnesota saw faster economic growth, added more jobs, increased wage rates, and lowered unemployment in the state on the backs of a slew of progressive policies including hiking taxes on the wealthy, raising the minimum wage, expanding early childhood programs, participating in the federal health exchanges, and allowing collective bargaining for unions.

Kaufman does not fully explore the implications of this comparison. Minnesota and Wisconsin are culturally similar but have somewhat disparate economies because of the manufacturing center around Milwaukee; Minnesota lacks a similar factory presence. Still, the structural changes to the American economy resulting from globalization left large parts of both states unhappy and unmoored.

The disaffected became particularly resentful of public employees, who continued to receive good wages and even better benefits. Walker tapped into this resentment when he attacked public-employees’ unions and went on to survive two recall campaigns; Minnesota experienced its own political rebellion a decade prior when it elevated showman wrestler Jesse Ventura to governor in 1999. But since then, the state has become more progressive. Kaufman could have addressed how Minnesota improved itself and whether that trajectory might apply in Wisconsin.

During the time since Kaufman has finished his book, the announcement of union leader Randy Bryce’s campaign has contributed to Paul Ryan, the other stalwart Wisconsin conservative, announcing his retirement from Congress. In July 2018, Governor Walker trailed his Democratic opponent by double digits. On book-tour interviews, Kaufman has said that the progressive burst represented by Bryce and now Alexandria Ocasio-Cortez of New York offers the best hope of a Democratic victory in Wisconsin and across America.

Whether this progressive vision is enough to bring Middle America out of its deep malaise is uncertain. While Kaufman is critical of conservative policies, Governor Walker’s supporters, who are mostly missing from the book, appreciate his union-busting. Walker can also claim to have attracted Foxconn, the Chinese company that makes iPhones, to Wisconsin with large tax breaks, and he has been working hard to allow more mining in the state.

Kaufman decries both efforts, but many Wisconsinites — and other Americans — see environmental damage or labor-rights retrenchment as acceptable costs for reversing decades of economic decline. Their choices cannot be politically rejected even if they are intellectually indefensible.

The book is unclear about whether Scott Walker, Wisconsin, and the country have reached their apogee of conservative power, but it does serve as a marker for those who don’t want to see its permanence.