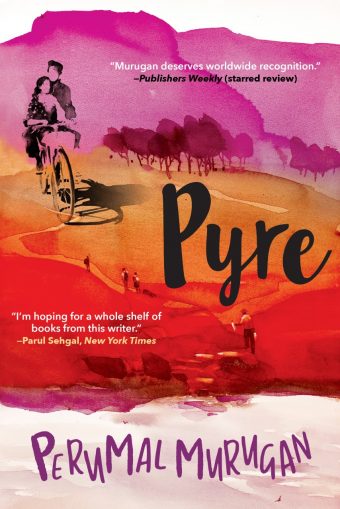 At the very opening of Perumal Murugan’s novel Pyre, when young Kumaresan and his bride, Saroja, disembark the bus at his arid farming village in the Tamil Nadu region of India, there is foreboding in the air. The land itself is not welcoming. “Just an ashen dryness, singed by the heat, hung in the air. Saroja hesitated to venture into that inhospitable space.”

But already, her new husband is striding up the road, leaving her behind.

They met in the “crowded city” of Tholur (according to an internet search, Tholur is a town with a 2011 population of approximately 7,500), where Kumaresan had gone to earn his fortune as a soda-bottle distributor.

From the beginning, theirs is a forbidden love, though it is up to the villagers to tell the reader why. The first person the couple meets demands to know, “What is her caste?” When Kumaresan says they are all of the same caste, the man doesn’t believe it. She is much too light-skinned.

Soon, the villagers are hounding Kumaresan:

“You can’t fool us like this, mapillai. There will definitely be a village meeting in a few days. We don’t know what the village is going to say. Just be careful. Or…like I suggested, take her back and leave her there. You can go once a month and give her some money for expenses.”

But Saroja can’t return to Tholur, for she has run away from her family to elope. She is trapped in the village with increasingly aggressive neighbors and a mother-in-law, Marayi, who broadcasts her verbal abuse for all to hear. The accusations are incredibly crude, as is everything about their life, from the backbreaking labor they must engage in to survive as farmers, to their simple huts with no running water or electricity, to their archaic notions of caste. In fact, caste is the only sure thing in an unsure world, and the villagers cling to it with a chilling fanaticism.

While Saroja’s brother and father are leather workers, occupying the lowest stratum of the caste system, she is unprepared for the villagers’ obsession with classifying her. Caste was observed but not fetishized in Tholur. Fearing her sharp-tongued mother-in-law, Saroja hides in her hut all day as her husband and Marayi labor from before sun-up to after sundown, trying to eke a living from the harsh terrain.

The story is recounted in spare, unadorned language as befits characters who are not educated and rarely venture beyond walking distance from their homes. Translator Aniruddhan Vasudevan includes a note on the challenges of translating “the distinct mark of regional speech patterns. In the Tamil text, Kumaresan’s and Saroja’s people speak differently; their speech is marked by rural and semi-urban variations.” He wisely does not make the speech patterns too vernacular but leaves it to the vulgarity of their insults to characterize the villagers.

The reader is not left without sympathy for Marayi, widowed at 20 in a caste that forbids her from remarrying. She labors mightily all day, every day, and the only comfort she has ever known comes from keeping her place in her tight-knit community. “Her morality was her only shield.” And now her son threatens to destroy her life’s work, all for the sake of an outsider. She warns him:

“You lost your mind at the sight of her fair skin and brought this ill-fated planet into this house. The only way you will see sense is if you get rid of this harbinger of doom. Otherwise, everything will go to dust, let me tell you.”

Author Murugan uses his imagery sparingly. The hard, hot rock on which Marayi, Kumaresan, and Saroja live. The goats that Marayi tends and on whom she vents her anger. Saroja, which means lotus, is frequently compared to plants, with Kumaresan thinking of her as a lush crop of corn that needs only a drop of water to freshen up, and Marayi seeing her as a bush that sucks the nutrients from the ground around Kumaresan’s grave.

It is into a bush that Saroja seeks shelter when the story comes to its inevitable tragic conclusion. The author makes no secret of what will happen — it’s there in the title. The pyre, however, consumes much more than just the life of a star-crossed lover. It is the hungry flame of ignorance born of a constricted life with no opportunity, and it threatens to consume not just India, but the whole world.

Alice Stephens is the author of the novel Famous Adopted People, editor of Bloom, co-founder of the Adoptee Literary Festival, a book reviewer, and a columnist for the Independent.