One Hundred Names: A Novel

A journalist attempts the impossible: to find a connection among 100 people. 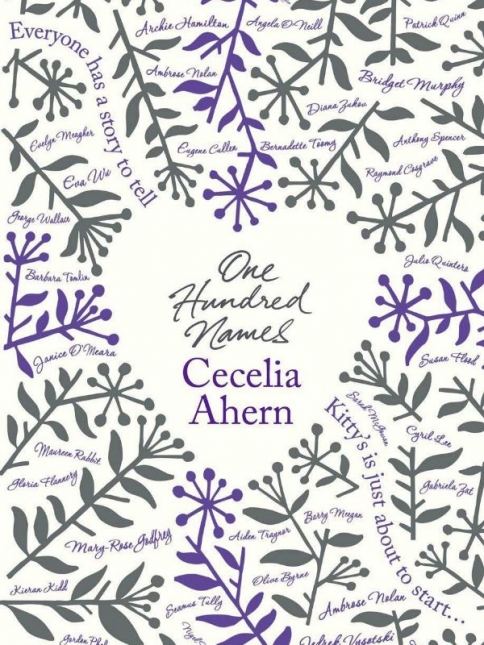 A journalist will go a long way to break a newsworthy story, and Cecelia Ahern’s latest book, One Hundred Names, pushes the boundary of journalist dedication and desperation. One Hundred Names follows journalist Kitty Logan and details her often cringe-worthy attempts to rebuild her own life by desperately pursuing the story her mentor never had the chance to write.

Kitty’s life is in a downward spiral. Her professional reputation is ruined, her mentor is dying, her boyfriend has left her, her landlord is threatening to evict her, and someone keeps smearing graffiti and feces on the door of her apartment. After slandering a popular teacher with false accusations of sexual assault against his students, Kitty has lost one job as a TV journalist and is about to lose another at Etcetera magazine.

As Kitty’s mentor, Constance (the editor-in-chief of Etcetera), lies dying in her hospital bed, she reveals to Kitty that the idea for the one story she always wanted to write is contained in an envelope in her home office. After Constance’s death, Kitty proposes writing the story as part of the magazine’s tribute to Constance (and as a means of saving her job at Etcetera). However, when she locates the envelope, it contains only a list of 100 names — nothing more.

Although Kitty considers herself to be a journalist who can find a story in anyone, finding the connection between 100 seemingly random people spread across Dublin seems impossible. Many of the people Kitty contacts have no desire to speak with a journalist, particularly one who is the subject of an infamous libel case; those that do respond to Kitty have no idea why they were included in Constance’s list. However, telling Constance’s story is Kitty’s last chance to salvage her career, and she pursues her task with perseverance and fervor.

It is this determination and grit that are Kitty’s main redeeming qualities. Throughout much of the story, Kitty is not a particularly sympathetic protagonist. Although Kitty feels some remorse for Colin Maguire, the teacher whose career and family are in shambles after Kitty’s false accusations, she finds herself unable to apologize for her mistakes because she is wrapped up in her own suffering and misery. Ahern often portrays her as vapid and entitled, and Kitty’s efforts to right her wrongs are more acts of self-preservation than those of selflessness — as even Kitty admits to herself. Kitty’s remorse is only for the misery that has resulted from her own poor decisions, rather than sorrow for the man whose life she has ruined or the colleagues whose livelihoods are jeopardized.

Karma has caught up to Kitty, however, and her many mishaps and blunders provide entertaining fodder (and, admittedly, a touch of schadenfreude). As Kitty tries to put her life back on track, she seems to encounter one stroke of bad luck after another: a boyfriend who moves out while she is at work, the appearance of an old friend with ulterior motives, a stolen bike, and the escalating (and increasingly creative) vandalism to her apartment door.

Kitty’s misfortunes are trivial though, particularly when compared to the trials faced by many of the individuals she meets in pursuit of Constance’s story. The stories from people found on Constance’s list are, in fact, the highlight of One Hundred Names. Ranging from an elderly but spry woman in a nursing home to a grieving ex-con to a Guinness Book of World Records aspirant, this eclectic cast of characters are all ordinary people that seem to be underdogs in some form or fashion, and I found myself rooting for them more so than Kitty. The desire to know their fates and their connection to one another kept me engaged in the story, rather than any real interest in discovering the outcome of Kitty’s professional struggles or various romantic encounters, which seem to be included almost as afterthoughts rather than significant contributions to the storyline.

In the end, Ahern ties the threads of the story together neatly — perhaps a bit too neatly. Although the premise of One Hundred Names is interesting, the lack of depth of many of the characters and a rather cliché and predictable finale keep the story from achieving its potential. However, Ahern’s book easily entertains, with its cast of eclectic characters and ability to derive stories from seemingly ordinary lives.

Jennifer Showell-Hartogs is an avid reader, world traveler, and a federal employee. She resides in Arlington, Virginia, with her husband, daughter, and dog.