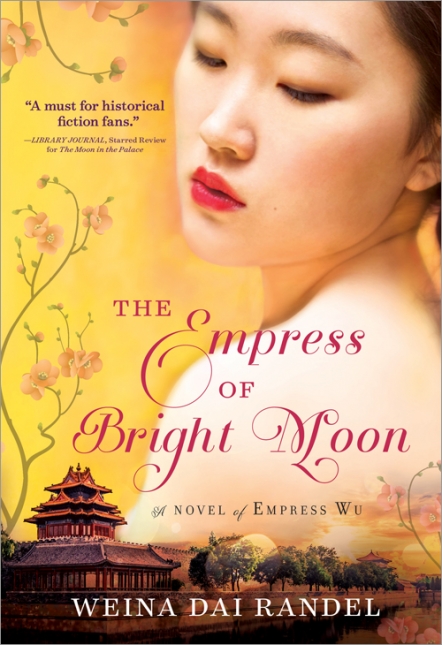 “Fear is a roof, Luminous Lady. Once you break it, you shall see the sky.” Such are the guiding words that the emperor’s royal sister conveys to the concubine Mei. Now titled Luminous Lady and Most Adored by the new emperor, Mei’s life and the lives of her infant children are in jeopardy. The regent has claimed rule over the kingdom by decree of the dead emperor, and the heir, Pheasant, is married to a loathsome tyrant of an empress.

In part two of this Tang Dynasty historical duology by Weina Dai Randel, the sweet, trusting Mei has left the innocence of early womanhood and is learning just how ruthless those with power can be. Pheasant’s wife, Empress Wang, is a cruel and vindictive shrew who stops at nothing to ensure the failure of a Buddhist monk’s prophecy — so that Mei will never become Empress of China.

The Empress of Bright Moon is a slower read than its predecessor, The Moon in the Palace, and on reflection, I can see how the pace was meant to build suspense and set the motivation for Mei’s change in attitude, which would allow her to grow into the persuasive woman she later becomes. Some of the actions of her nemesis, Empress Wang, seem gratuitously gruesome, but then, these are brutal times.

Ironically, in some of the Tang histories, it was not Mei who was described as having the sweet personality, but the lady Wang, so it is best not to confuse fiction with fact. Historically, Mei’s beloved emperor, Pheasant, was a weak ruler, just as he is portrayed in the novel. But because of his weakness, at times, it is difficult to understand Mei’s devotion and love for him.

In the early part of the story, the reader is confused as to why he refuses to act when his will is thwarted, and why his empress wife seems to wield more power than he. Without the support of his ministers and the regent, rules and protocols bind the hands of the emperor, but not those of the empress. It is not until near the end of the book that he shows his worth.

The characters step off the page through Randel’s fine writing. Pheasant’s sister, the princess Gaoyang, is refreshingly different from most historical characters, and her willfulness, athleticism, and devil-may-care attitude are reminiscent of the women in Ang Lee’s brilliant film “Crouching Tiger, Hidden Dragon.”

As the story unfolds, it becomes clear why both Mei and Pheasant bow down to the will of the regent and the empress. Fear, as Pheasant’s sister points out, is the emotion that holds individuals back from action. It is the fear of losing her position and her children that keeps Mei in check, and it is the fear of losing his ancestors’ respect and defying sanctioned authority that prevents Pheasant from maturing into the emperor he should have been.

These two cannot show what they are capable of until evil befalls them — and that comes with the deaths of those they love. Lies and deceit keep the emperor and his Luminous Lady powerless, and the regent and the empress in control. But it is their realization that they have nothing left to fear that ultimately frees them.

When Mei’s grief and sense of persecution becomes too great, she resorts to the old master’s writings: Sun Tzu’s The Art of War. And when she discovers the advice that liberates her from the empress’ tyranny, she learns she must preserve something more important than her selfish wants. “When your goal is too great the best method to deceive your enemy is to make yourself a victim,” so wrote the master.

Sacrificing herself is how Mei brings down the enemy, and while many authors have incorporated this idea, Randel has perfected it, leading the reader into complacency, only to turn the tables. But Mei’s trials are not over as long as she seeks vengeance for personal gratification. When she finally understands the words of the Buddhist monk whose prophesy led her down this precarious road — that virtue and not vengeance makes a great leader — only then can her true future as empress of all of China begin.

Historical fiction fans will appreciate this book. Well researched and smoothly crafted, and with a sincere and winning style, it seamlessly transports the reader into the 7th-century Tang Dynasty to experience, firsthand, a woman’s grueling and sometimes humiliating path to power.

Deborah Cannon is author of the historical fantasy epic The Pirate Empress, set in Ming Dynasty China. She also writes paranormal suspense novels, won an honorable mention for “Twilight Glyph,” a short story in the Canadian Tales of the Fantastic (Red Tuque Books 2013), and is a contributor to the popular franchise Chicken Soup for the Soul.

By Thuận; translated by Nguyễn An Lý