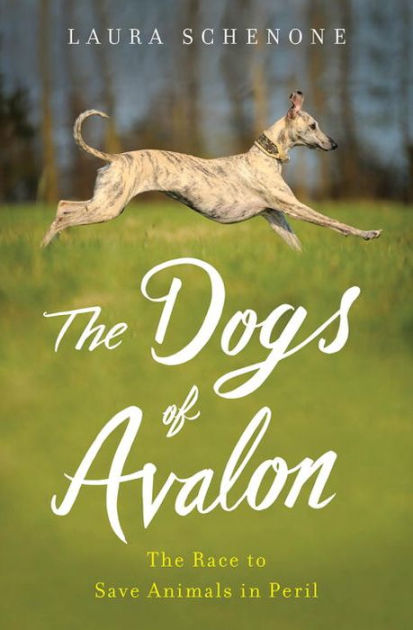 Greyhounds are the Katharine Hepburns of the canine world: lean and elegant, with apparent self-sufficiency bordering on haughtiness. The monk in Chaucer's Canterbury Tales is very fond of them: “Greyhounds he hadde as swifte as fowel in flight/ Of prikyng and of huntyng for the hare/ Was al his lust, for no cost wolde he spare.”

That is the oldest known reference to these dogs in Western literature.

Greyhounds were born (and bred) to run. They can reach speeds of more than 40 mph, which means humans who gamble like to bet on which one of the animals finishes first in a race. Many of the greyhounds who compete professionally don't do well when they grow old and start to slow down. A few are lucky enough to find new lives as family pets, but thousands more are abandoned, killed, or given over for medical experimentation each year.

Laura Schenone recounts some of their stories in The Dogs of Avalon: The Race to Save Animals in Peril. It's the kind of nonfiction book that makes you both despise and admire humans. A warning: Some of the descriptions of animal abuse will likely haunt the reader (one, the tale of "Demi the Graveyard Dog," actually gave me a nightmare).

Occasional revulsion is, blessedly, counterbalanced by the often-moving stories of those who do all they can (and in some cases, perhaps more than they should; animal rescue can become an obsession) to save their fellow sentient beings.

The titular dogs are greyhounds in Ireland that have found good lives in Avalon, a shelter built in County Galway after years of work, frustration, fundraising, and luck. That these animals were in peril becomes obvious over the course of the book.

Schenone and the greyhounds have found their champion in Marion Fitzgibbon, head of the Irish Society for the Prevention of Cruelty to Animals. Fitzgibbon seems to be someone you’d want on your side during, for example, a difficult childbirth — or a firefight. Determination mixes with compassion to become the driving forces in her life.

Fitzgibbon unknowingly experienced the First Noble Truth of Buddhism — "Existence is suffering" — at about age 6, when she saw a working horse struggling in a rainstorm and begged her mother to let her shield the animal with an umbrella:

"She tried to explain to her parents that she wanted to hold it over the horse. She needed to at least try to protect him. When her bewildered parents said no, we don't hold umbrellas over horses, she began to sob. They tried to comfort her by explaining that a horse in the rain was perfectly normal because that's what a horse's life is. Animals don't feel things as we do. They're different from humans. She only cried harder because she knew her parents were lying."

Years later, Fitzgibbon decided that her own path out of suffering was to help as many animals as she could. "Every living creature has the right to live and die with dignity," she tells Schenone in what becomes a theme of the book.

That seems to be a particularly difficult mission in Ireland, where, as both Fitzgibbon and the author discover, many people still regard animals as things rather than fellow beings — although attitudes there, like in other countries, seem to be changing.

The Dogs of Avalon weaves several stories together, not only Fitzgibbon's and those who step in and out of her rescue circle, but the author's, as well. Despite having a fear of most animals, Schenone becomes the caretaker of a rescued lurcher (a greyhound crossed with another breed) named Lily. During a conversation with her (who among us doesn't talk to our animals?), the other overarching question of the book is raised: "'Lily, tell me' I said one morning when we were walking to the park, 'what do I owe you?'"

What do we owe any animal? A relatively peaceful life and a painless death, in the case of those we raise for food? Kindness, at minimum? Devotion? Respect? Love?

As she looks for answers, Schenone’s own views evolve: “For many years, I wrote about food and cooking. Animals, for the most part, meant meat, milk, cheese, eggs, fish. I believed they should be treated humanely, but they were food, nonetheless.”

In the course of researching and writing this book, her attitude is transformed.

But Schenone is never quite sure she’s doing right by Lily. She concludes that many of Lily’s early behavior problems after being rescued arose from the fact that she had been bred to do something: chase a hare, run like a flash.

She writes: “Dogs are in a prison of our making. We bred them so they could gladly be our servants in specialized jobs. Now we expect them to suddenly switch jobs and go against their genetic raison d’etre so they can be our companions, therapists, teachers and healers.”

In the end, a good part of the way we decide to treat greyhounds or any other beings with whom we share the planet comes down to the choices we make. Marion Fitzgibbon has chosen to devote her life to her belief that every creature deserves to live and die with dignity.

Many others have chosen to join in the effort, even though it can cost them everything, from personal relationships to huge sums of money. Laura Schenone was impressed enough by their stories that she chose to share them.

The Dogs of Avalon is not one of those How Adopting a/an (e.g., Dog, Cat, Aardvark, Wolverine) Changed My Life books. One thing that sets it apart is the reporting. Schenone, whose previous books are The Lost Ravioli Recipes of Hoboken and A Thousand Years Over a Hot Stove, has expertise in cooking and takes care to get her facts straight in Dogs. (Messing up the ingredients and proportions in a ravioli recipe, I suspect, would not go over well with certain Hoboken families.)

Want to know how many greyhounds were considered "usable" to race in 1952? The answer is 30 percent, which was not a good thing for the remaining 70 percent. What did the second-century writer Arrian think of his Celtic hound? He liked and admired her, telling us that when she was young, she could catch as many as four hares a day.

The history included here is both interesting and useful. This sort of information is imparted seamlessly over the course of the narrative. It is particularly effective in the sections on greyhound racing and the grim statistics on the long-term survival rates of the racers.

Schenone’s prose moves easily from journalistic to lyrical, as with her description of a town in Ireland she visited:

“The town of Kilfinane looked like it could have come from a picture book of charming Irish villages. Rows of buildings lined the Main Street, each tinted a different pastel hue of blue, orange, green, or yellow, stark against the treeless sky. Pubs, butchers, betting shops, and restaurants, one after the next, in an unbroken façade. Beyond the town lay the forested Ballyhoura Hills.”

The author has a way with words.

Those who are not as deeply concerned about animals as Marion Fitzgibbon (and, in the end, Laura Schenone) sometimes ask why those who are spend so much time, energy, and money on non-human creatures. The answer is partly revealed in The Dogs of Avalon: Once you understand animals, how could you not do something to help them? To let them suffer is a moral failure.

The hope — mine and, I suspect, Schenone’s — is that this book will find a broad readership. To prompt change in the way greyhounds are often mistreated, it is not enough to reach only “animal people.” A more general audience needs to find Dogs and consider the issues it raises. The book is deeply felt but not sentimental or cloying, which makes it both accessible and important.

The Greyhound Racing Association of America argues for the economic benefits of the 40 active racetracks its website shows are still operating in the United States. Anyone reading The Dogs of Avalon is unlikely to be persuaded.

Sam Litzinger is a correspondent for CBS News and the producer/host of the podcast "Talking Animals." He volunteers at Last Chance Animal Rescue in Waldorf, MD.

A controversial conflict is recounted in precise detail.