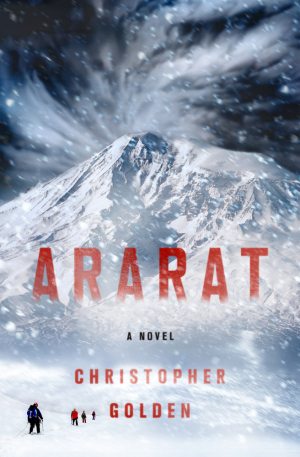 What happens when a Christian, a Jew, a Muslim, and an atheist walk into what may be the wreckage of Noah’s Ark and discover a demon-like skeleton there? The answer: Nothing good. And that’s the beauty of Christopher Golden’s Ararat. It’s a horror novel, plain and simple. So if you’re looking for something else, well, to hell with you.

At least, that’s what some of the more religious members of the large exploration party — which includes scientists, filmmakers, archeologists, a United Nations observer, Turkish soldiers/minders, an undercover agent from the U.S. Department of Defense, and many others — begin to suspect they’ve tapped into after arriving onsite and being overcome by feelings of extreme creepiness.

Opened after a sudden earthquake and avalanche, the maw-like gash in Mount Ararat partially reveals a jutting, three-level ship made of ancient hewn timbers. Stalls for animals and quarters for humans suggest that the Old Testament “great flood” tale was real; a horned, shriveled corpse found in a sealed crate suggests something far more sinister.

“The fingers were…curved into hooks by the millennia it had spent dead in that box. The skin stretched tight over its chest in a purplish-gray hue…The eyes had sunken to dried berries in its head. The cadaver’s skull was misshapen, bulging outward at the top and too pointed in the jaw. In life, it would’ve been a very odd-looking man…If it had been a man.”

The governments of Turkey and America don’t know if there’s any there there, but they each plan to call dibs on the find just in case. Documentary-shooting couple Meryam and Adam seek career-making footage of an authentic biblical relic. The Catholic priest, Father Cornelius, hopes for edification. And the local guides want only to make it back down the treacherous mountain and earn their pay before a looming blizzard buries them all.

What could go wrong?

Quite a bit. Especially when an encroaching weirdness begins to run its nails down everyone’s spine; when people turn abnormally vicious, or needy, or paranoid. When they wake up screaming, inexplicably overcome by long-buried childhood terrors. When they start disappearing.

See, something is there. But is it possessing them — or revealing them? Is the carcass spreading wickedness like an invisible contagion? Or are the explorers’ own inner devils merely growing bold in the claustrophobic darkness and relentless cold? Did the travelers whose remains were unearthed near the demon fear it and thus lock it in a sarcophagus? Or were they its caretakers?

And why is it so hard to keep count as the bodies start piling up?

Unfortunately, that’s a function of launching the narrative with a bloated cast. Like every episode of “Star Trek,” where you know not to get attached to the unidentified guy in the odd-colored shirt, don’t become emotionally invested in Ararat’s minor players, who drop like frozen flies. (It’s no spoiler to reveal this. See “horror novel,” above.)

It’s a shame, because these characters’ demises aren’t as frightening as they otherwise might’ve been. The random extras are mostly names, and if you don’t know much about someone, his or her shocking disappearance won’t be. It’s a missed opportunity for added white-knuckle moments.

In fact, Ararat isn’t all that terrifying (aside from one supremely eerie scene involving a grandfather clock). It’s chilling and atmospheric, yes, but offers nowhere near the gore or number of scares as, say, Stephen King’s Pet Sematary or 'Salem’s Lot. But that doesn’t mean it’s not a spooky, entertaining read. It is.

“Even as [Father Cornelius] left his work behind, he could feel the horned thing watching him go, could feel the pressure of its regard, the malevolence of the dark shadows that stirred in the empty orbits of its eyes. He had never believed in tangible, physical demons. Though he had trouble confessing it aloud, that had changed.”

Golden is a fine writer, and he’s crafted a smart tale with rich biblical underpinnings. It may not cause you to sleep with the lights on, but parts of it will linger in your head as you drift off. And if that’s not enough payoff from a horror story? To hell with you.

Holly Smith is managing editor of the Independent. She thinks What to Expect When You’re Expecting is the scariest book ever written. Follow her on Twitter at @HSmithWrites.

A teen fashionista and paleontology nerd obsesses too much about her size.