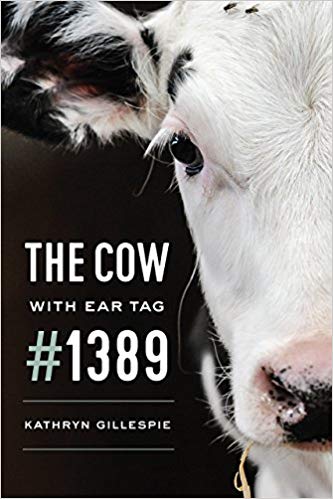 Would you, as Kathryn Gillespie describes in The Cow with Ear Tag #1389, be willing to knock a terrified cow unconscious by shooting a bolt gun into its forehead, shackling one of its hind legs, hoisting the animal upside down onto a conveyer line, slashing its throat, then cutting its body into pieces?

My guess is that, confronted with that option, most people would rather have a salad.

Gillespie’s The Cow with Ear Tag #1389 is a report on dairy cows as products rather than sentient beings. It is a disturbing read. (Case in point: Anyone not possessed of a strong stomach should consider skipping the section on “Rendering Animal Remains.”)

Gillespie writes that one of her purposes is to “combat the act of forgetting and looking away,” and, in that, she succeeds.

The Cow with Ear Tag #1389 takes the author from field to auction house, slaughterhouse to animal sanctuary as she learns how cows are born, live (often only briefly), and die. Some of the people involved in the cow business refuse to talk to Gillespie; most view her with deep suspicion. Nevertheless, she persists. Eventually, enough people are willing to share their stories so that she can tell hers.

Those who have given up eating meat are indeed reducing the amount of animal suffering, but unless they’re strict vegans (who don’t eat or use animal products), at least some of the food in their bellies comes from miserable creatures. Milk, cheese, butter, and yogurt are not the products of dead animals but, as Gillespie shows us, they do come from cows that live lives far from any imagined pastoral paradise.

One exchange Gillespie had with a dairy farmer named Homer Weston in Washington State is surprising:

“Our dairy cows end up at McDonald’s and places like that.”
“Oh really? Is that the case for most dairy cows?” I asked.
“Yes. If you’re eating a burger from a fast food joint, you’re most definitely eating a dairy cow.”
“Why’s that?”
“They’re worn out — they’re not much good for much else other than cheap, processed meat or ground beef.”

The animal of the book’s title, Cow #1389, is typical of the cows that Gillespie encounters during her research. She sees it collapse at a cull market auction for cows that are no longer productive or economically viable. These must be some of saddest places on earth. Number 1389 is doomed, and Gillespie is distraught, even thinking of offering to buy the animal to save it and then — do what with it?

Her reaction is one most of us would have. When confronted point-blank with pure suffering, we feel pity, compassion, and the urge to do something to help. How to help in a system that prizes profit over compassion is one of the main concerns in the book.

Gillespie is a postdoctoral fellow in animal studies at Wesleyan University and occasionally cites animal welfare work done by other scholars. This will be of interest to readers who wish to discover more about this relatively new field, particularly as it involves farmed animals, billions of which are slaughtered each year.

The academic research is important, but Gillespie acknowledges that the business of animal exploitation — there seems no other word for it — affects most humans viscerally. No one except sadists and psychopaths wishes to inflict pain on an animal, which is one reason so many involved in the animal industry have developed coping mechanisms to turn a creature into a commodity — give the cow a number, not a name; don’t look long into the face of a cow being sent to slaughter; focus on the money and not the frantic mooing.

Gillespie’s book is not the kind to be read before falling asleep. In fact, the reader probably would not be able to drift off after learning about the conditions at one auction the author attends:

“As we watched the cows and steers waiting in the pens outside the auction buildings, many of their eyes bulged in fear, the whites showing, and saliva foamed at their mouths. They were covered in feces and caked with mud. Bellowing in the pens echoed across the auction yard.”

This is one of Dante’s circles of hells with animals as the inhabitants.

The reader may wish to seek comfort in the fact that many organizations are working to improve conditions for farmed animals (some of which, admittedly, want to end the practice of raising animals for food). The Humane Society of the United States is active in this area, as are such groups as Mercy for Animals and The Farm Animal Rights Movement. Things are not quite as unrelentingly grim as a casual read of Gillespie’s book might suggest.

We Americans have decided that some animals — e.g., cats, dogs, hamsters, parrots — are companions and that others — e.g., cows, pigs, goats, lobsters — are dinner. We argue over the ethics of those choices, but Gillespie raises a more fundamental question: What do we owe any animal, including the ones from which we take milk?

Her answer as implied in The Cow with Ear Tag #1389 is that we should not make them suffer. This seems like a simple enough concept, but for those big-eyed dairy cows, it is an ethic that has yet to be taken up by a critical mass of farmers.

Sam Litzinger is a correspondent for CBS News and holds a master’s degree in comparative philosophy. He volunteers at the Last Chance Animal Rescue in Waldorf, MD, where he is an unofficial puppy and kitten cuddler.