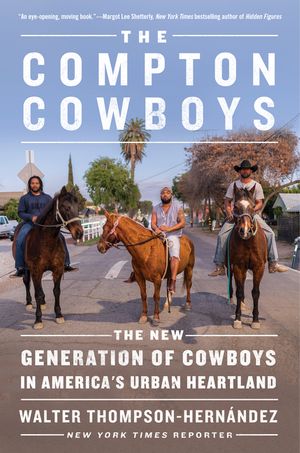 “Urban Heartland” is an unexpected way to describe Compton, a city in the southern part of Los Angeles County. “Heartland” ordinarily evokes the image of flyover country: a horsey kind of place with amber waves of grain, such as Colorado or Texas.

Compton, on the other hand, is known for drug trafficking, gang violence, murders, and other banes of urban life — in short, it is not a horsey kind of place. That’s what makes the story of the Compton Cowboys such a heartening one; it is as unexpected as the subtitle of Walter Thompson-Hernández’s new book, The Compton Cowboys: The New Generation of Cowboys in America’s Urban Heartland.

The cowboys here are 10 African-American men (along with a few others, including one top female rodeo star) who spend much of their lives caring for their citified horses, riding them in public and cultivating a proud image that, it must be said, is almost as important as the horsemanship itself.

American culture has always celebrated cowboys; it has also depicted them, almost without exception, as white. There was no black John Wayne, Clint Eastwood, or Marlboro Man. Yet that popular portrayal was inaccurate: The classic 1965 book The Negro Cowboys by Philip Durham and Everett L. Jones showed that black cowboys were plentiful in the American West after the Civil War.

Growing up in Huntington Park, a city close to Compton, Thompson-Hernández wondered why the history of the West that he learned about in school was exclusively white. When he discovered the Compton Cowboys at age 6, he was entranced.

In March 2018, the author wrote a well-regarded New York Times Magazine feature about the cowboys. Returning to the same wellspring for this book, he spent a year with them — partly as ethnologist, partly as journalist, and partly as friend — and became “part of the group, perhaps the 11th cowboy.”

These mixed authorial roles are problematic. They make for a narrative that can be all over the place, and the story that worked so well as a magazine piece is stretched too thin for a book. It is scattershot and often hard to follow. The one thing that does come through with clarity, though, is the magic of horses. “There’s something about the outside of a horse that’s good for the inside of a man,” as the saying goes, and these cowboys seem to know that instinctively.

According to Thompson-Hernández, before their arrival at the Compton ranch, the cowboys’ horses were “throwaway” animals, sometimes abused and malnourished. Bought for as little as $200, they were “horses that other riders and racers had given up on.”

(As horse farms go, the Compton ranch is a low-rent operation, but it still costs $25,000-$30,000 per month to keep afloat; the money comes from well-heeled donors such as Magic Johnson and others.)

Similar to their mounts, the cowboys themselves have each undergone hard times and trauma; some have been to prison. The men achieve a sense of purpose in caring for the animals, but it’s also a form of therapy. In a sincere and lovely page-long passage discussing this, Thompson-Hernández explains that the horses “had the ability to turn the most aggressive gangster on the block into the sweetest version of who they were as small children.”

The author bypasses standard conventions of reportage, though not, one suspects, consciously. Early on, for example, he refers in passing to someone named Mayisha in a way that implies the reader should be familiar with her.

In fact, Mayisha is an important part of the story; she was, as the author later recounts, the founder of the youth riding program from which most of the Compton Cowboys got their love of horses. As it is, however, the reader is left wondering, “Who is this Mayisha?”

And small details, so important when giving characters color and depth, are presented with a purpose that is sometimes a mystery, or are, themselves, befuddling. (One example: You can’t “nurse” a Newport cigarette for 30 minutes; it can’t be done.)

An editor could (and should) have addressed these and other distracting flaws. All of them are evidence of a young writer with promise who, notwithstanding the imprimatur of the New York Times on his résumé, is still learning his craft.