The Comet Seekers: A Novel

Unconventional structure aside, this story of family turmoil — and family secrets — has much to recommend it. 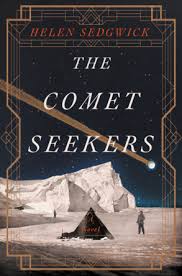 In order to fully appreciate The Comet Seekers, you must discard all expectations of what a novel should be. A conventional reading cannot be applied to Helen Sedgwick’s debut.

The form of the novel fights against this sort of reading from the first page. As the story begins, scenes are offered in short bursts, a technique that continues throughout. Readers are not given a chance to sit back and be taken in by the beauty of the words, descriptions, or emotions, all of which are rare in this text. Instead, they’re shown flashing images and abrupt scenes — akin to a person going through a box of loosely connected Polaroids.

The novel is an amalgamation of myriad vignettes, each one tied to the other, but each allowing the reader a mere glimpse, a surface look, at the pieces of history that make up a character’s life and that link them with others in the world.

The novel opens with Róisín and François in Antarctica with a team waiting for the appearance of a comet. At this point, these two are nearly cardboard cutouts, two-dimensional characters that are simply acting out predetermined parts. As readers, we do not have any connections to them, nor does it seem that the novel invites us to form any. We don’t care, not really, that François’ mother has passed away while he sits, isolated, at the tip of the world.

Furthermore, we care little for why Róisín feels guilty or misses someone named Liam. At this point, the writing keeps readers at a distance, not even allowing them entirely into conversations (there are no quotation marks in the novel). Perhaps Sedgwick does not want readers to be empathetic, at least not before they are aware of the characters’ backgrounds.

Here is where the novel shows off Sedgwick’s skill at weaving not so much a story as a rich backstory, an in-depth history. Slowly, the novel reveals events and circumstances that eventually lead Róisín and François to Antarctica. Scenes are thrown at the reader, leaving them to fit the puzzle pieces together until finally the novel ends up right back where it began. Now, we care.

Yet these characters and the loose plot serve more as props for the moral of this work: Family is always a part of us, but if we allow that bond to overwhelm us, it may lead to the death of imagination, freedom, and, as the book shows over and over again, ourselves. Unlike most contemporary novels, Sedgwick’s work seems more focused on giving us evidence of the grave consequences one faces if one tries to forget lineage altogether or attempts to hold on too tight.

However, as elegantly as the novel builds upon this theme, some issues are present. Its scope doesn’t extend past one particular family. A wider view, with varied cultural, national, and religious backgrounds, would have made it more intriguing and lent depth to the theme. Which brings up another issue.

The Comet Seekers focuses on the Irish Róisín and the French François. But these two characters may as well be Rosy from Duluth and Frank from Hoboken. The few French words in the text seem like throwaways, plugged in as an afterthought to remind readers who’s from where. Why choose a cast of French and Irish characters and then make them interchangeable?

More troubling is the incest that occurs in the book. It’s not that it exists in the narrative, but that it seems pointless to the story. Furthermore, the reasons the novel provides for its existence are far from satisfying and, at times, inexplicable.

Yet even with these minor faults, the trajectory of the book remains impressive as it is fabricated to match the trajectory of a comet, particularly one like Halley, with its ability to return to the same point in the sky. Much like the notion of human lives following trajectories, repeating similar histories across time and space, in different bodies, over and over again.