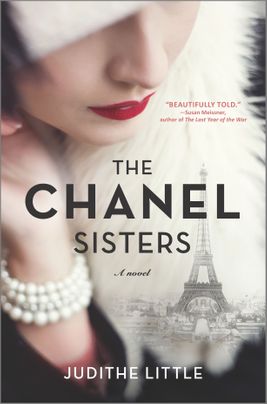 “People thought they were buying Chanel, glamour, Parisian sophistication. But what they were really buying were the ornaments of our childhood, memories of the nuns who civilized us, the abbey that sheltered us. An illusion of riches sprung from the rags of our past,” reflects Antoinette in The Chanel Sisters, the new novel by award-winning author Judithe Little.

In it, Little takes us into a fictionalized world of the real-life Gabrielle and Antoinette Chanel as they struggle to survive a distressing childhood, find their independence, and eventually build their eponymous brand. The story is written from Antoinette’s perspective but reveals intimate details of the life of Gabrielle (aka Coco), the far more famous sister.

Building on the bare-bones scaffolding of what is known about Antoinette, Little crafts an intimate tale chronicling the sisters’ unorthodox journey from rags to riches. Their education starts in a Catholic orphanage in Aubazine, France, in 1897, after their mother dies of consumption. Antoinette is 8 and Gabrielle 12, and none of their relatives, including their father, wants them. Antoinette knows they are better off in the orphanage:

“Before the nuns took us in, we’d been hungry most of the time, our clothes torn and dirty. We spoke only in patois, not French. We could barely read or write because we’d never gone to school for long. We were savages, the nuns attested.”

The girls carry with them always the belief that they’re unlovable. After all, if their own father doesn’t want them, why would anyone else?

Their outlook changes upon meeting their aunt Adrienne, only slightly older than Gabrielle, in 1898. She gives the sisters a glimpse of the élégantes — wealthy people who live in enormous homes and wear luxurious clothing. To keep her nieces’ imaginations engaged, Adrienne gives them magazines filled with la haute couture and novels about convent girls marrying counts and peasants becoming queens.

The sisters begin to realize they needn’t be resigned to their fates. They can become something better, which they vow to do. In 1900, they move to the same convent school Adrienne attends in Moulins, where everyone considers all three girls charity cases and where they’re kept separate from the paying families, the payantes.

As impoverished students, they must use different tables, dormitories, classrooms, and unsightly uniforms. To make the latter more flattering, Gabrielle takes the outfits apart and puts them back together in a more attractive way. “If we can’t have the expensive fabrics of the payantes, we’ll have the best fit,” she says.

But as Antoinette realizes, “This was about more than the fit of a skirt or blouse. This was about the future, about the power I’d never felt before, all because of the cut of cloth and the placement of stitches.” The expert stitchery they learn at the orphanage eventually empowers the girls to rise above. “You don’t accept what you’re told you are,” says Antoinette. “You decide for yourself.”

Gabrielle and Adrienne eventually gain independence by working as seamstresses for fashionable ladies. (The younger Antoinette remains at school.) But they also find new friends who encourage Gabrielle to explore her love of singing. After she entertains them with a song about a lost dog named Coco, she adopts the moniker. It turns out that Coco Chanel loves hearing people shout her name.

In 1906, Gabrielle and Adrienne move to Vichy to work in a hat shop, while Gabrielle also tries to launch her singing career. Adrienne later moves to Souvigny to find an aristocratic husband, at which point Antoinette replaces her at the shop.

When Gabrielle finally admits she doesn’t have the talent to be a singer, depression overtakes her, and she opts to become a kept woman at the estate of her married lover, a horse breeder. There, she begins creating loose-fitting, comfortable riding outfits for herself, using men’s clothing as a pattern. She also designs unique, minimalist hats out of sync with the current look. Gabrielle knows the “overdone could overwhelm,” and that women’s beauty should be enhanced subtly.

In 1909, Gabrielle, along with Antoinette, moves to Paris to open another hat shop, Chanel Modes. Working together, the sisters create a simple design that appeals to all classes of women. When Gabrielle’s casual couture catches on, she opens a boutique in Deauville. Her line gives women freedom, especially during WWI, when even la haute work as nurses, and women need chic but sensible apparel: knit sweater-coats and belted tunics, “resort-wear transformed into war-wear.” Gabrielle sets the trend, bringing fashion even into bomb shelters.

As the author notes, Gabrielle’s years with the nuns defined her, but she never admitted to growing up in an orphanage. The Chanel logo — interlocking Cs — adopted in 1925 mimicked the intertwining loops in the stained glass of the long-ago abbey. Her jewelry mirrored the celestial stars-and-moons patterns of the convent’s stone floors. Her trademark style — simplicity, a black-and-white palette, textured fabrics, and clean scents — all stemmed from Gabrielle’s childhood spent in convent schools.

In this inspiring novel, Judithe Little brings the private history of Antoinette and Coco Chanel to life, revealing how, over time, each sister fulfilled her lifelong desire to tell their absent father, “Look at me. I am worth loving.”