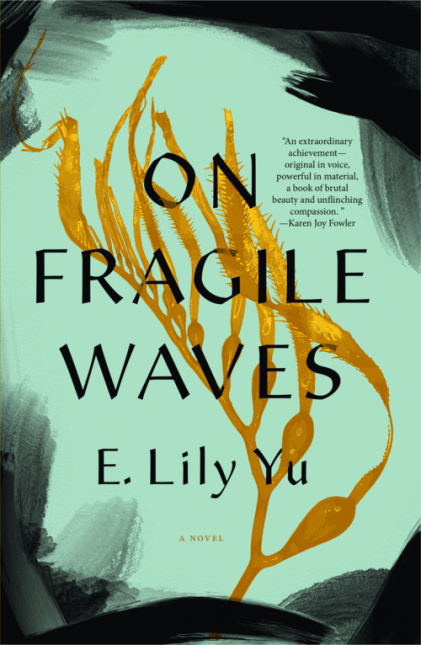 When Firuzeh is 6, fire falls from the sky over Kabul, and conversations among individuals must be confined to halting phrases between mortars. When the shooting stops, her father, her Atay, tentatively turns on the radio, and over its fragile soundwaves, he hears music. This is a sign: It’s time for the family — mother, father, sister, and brother — to flee alongside others seeking sanctuary in foreign lands.

With this opening scene, E. Lily Yu begins her poetic debut novel, On Fragile Waves, tracking a family’s migration from Afghanistan to Pakistan to Indonesia to Nauru, a small island country northeast of Australia. There, they become quarantined in a refugee tent camp, left to wait with faint hope that they might be granted permission to settle in nearby Australia.

The fictional journey juxtaposes the opposing poles of human emotion: doubt and faith, fear and comfort, hope and despair. The family travels endless days filled with dread and numbing cultural indifference from others. The horrific events portrayed are made endurable by the author’s skillful use of characterization and poetic imagery.

Light touches are introduced as the parents weave indigenous myths and mystical tales of heroism into the family’s plight to inspire their children and soften their fright. Thus, with Yu’s careful handling of language, a fatal monsoon becomes a terrible — and, paradoxically beautiful — conquest of fear. The reader, like the listening children, becomes captive to the majesty of well-fashioned prose:

“On their sixth day at sea, the typhoon came.
What had begun as a bruise along the horizon rapidly bled across the sky…
The smooth, untroubled water of the previous day now heaved and fumed. A wave broke in pearls over the deck and hissed away. Salt spray whipped their faces. Around them, the other passengers wailed and prayed, their voices drowned out by the weltering water.
The boat leapt. Wood groaned.”

In our 21st-century world, where hundreds of thousands continue to take the hardscrabble road of flight to better their lives, this novel reflects the pathos and searing courage demanded of those who would start anew.

A particularly graphic scene occurs when Firuzeh’s mother, her Abay, takes a refugee-camp bus to a nearby town to buy shoes for her daughter with money she has saved from the few coins paid for washing dishes in the camp. Returning to the bus just minutes late after shopping, Abay is stripped naked and put into a prison cell teeming with mosquitoes. Released the next day, she groans a “thin, high terrible” sound. Her family, horrified, urges her to sleep while knowing it will be impossible:

“Puffy little mountains of mosquito bites covered Abay’s face and arms and feet, every inch of skin that was visible, down to her soles. Some had bubbled and wept golden pus. Some were crusted and caked with blood.”

The author’s precise prose creates an immediacy of presence, trundling the reader along the immigrants’ desperate journey uphill and down as the four family members, harassed by dire circumstances and insurmountable uncertainty, fall prey to petty bickering and understandable stress. The reader feels every bump in the road.

A recipient of the LaSalle Storyteller Award in 2017 and the Astounding Award for Best New Writer in 2012, E. Lily Yu is an author to watch. On Fragile Waves foreshadows an innovative new direction in storytelling. In startling language, she combines dreams, myth, poetry, and drama to tell the contemporary saga of one small girl’s story of migration.

The story is not soon forgotten.

Janet A. Martin is a graduate of Emory University and Columbia Graduate School of Journalism and a contributing writer to the Bread Loaf Writers’ Workshop. She has published in regional and national magazines and is the author of a seasonal novel, The Christmas Swap.