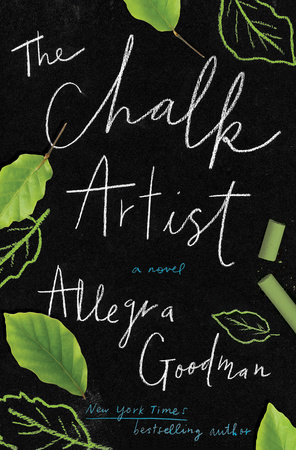 According to the old adage, there are two kinds of people in the world; from there, the adage splits into an infinite array of pairs.

There are, for instance, those born to a life of ease, and those who’ve had to work for every nickel. There are people who want to make their mark producing something that will outlive them, and people who delight in the ethereal and effervescent. There are the generous few who feel obliged to level the playing field, and the win-at-all-cost types, oblivious to their emotional roadkill in pursuit of zero-sum victories. And there will always be worried parents and annoyed kids.

In her latest novel, The Chalk Artist, author Allegra Goodman weaves together all the above sets of two-kinds-of-people duos, with a few more thrown in for good measure. She begins by introducing a pair of characters who discover that even though they were born in the same hospital and both grew up not far from Harvard Square, their paths from preschool and beyond define them as members of two very different tribes.

Collin is a triple-decker dweller and art-school dropout, currently working as waiter between his aspiring-actor stints in local productions staged at tennis bubbles and on traffic islands. He also happens to be a literal quick-draw artist, favoring chalk for its here today/gone tomorrow impermanence. A perfect example of his creative effort is the gorgeous theatrical scenery he draws on rolling blackboards, producing masterpieces that exist only long enough to be washed down once each production is over, much to his mother’s dismay.

Nina, meanwhile, is a child of wealth and opportunity who skips the easy paths available to her after college, opting instead for a Teach for America-type job that’s as exhausting as it is demoralizing to her high-achiever self-image.

Nina’s life of low-pay drudgery is offset by the luxury of a riverfront apartment underwritten by her father’s big corporate score in the multi-player online-gaming realm, where he creates worlds that mostly young men (like Collin) adore, and that nearly all their mothers disdain.

It’s a tricky do-si-do that gets more complicated as Collin and Nina become enmeshed in each other’s tribal ground rules. Carefree Collin now feels aimless when he sees himself reflected in Nina’s accomplished eyes. Nina feels a responsibility to fix a whole host of the world’s ills, but can’t quite come around to Collin’s belief that her efforts to do the right thing are too limited.

She knows she could open doors for Collin in her father’s company, but knows also to be careful of what she wishes for her other-side-of-the-tracks boyfriend. Each passes through the other’s looking-glass, and the curious worlds they encounter are topsy-turvy indeed.

As the couple’s relationship proceeds, multiple characters are folded into the plot. Collin’s neighborhood includes kids who are students where Nina teaches, including Diana, a reserved girl who hides in the back of Nina’s junior English classroom. Diana has a twin brother named Aidan, who is addicted to Nina’s father’s virtual-reality creations.

The twins have a mother who is at her wit’s end to retrieve the child she fears has been lost to the gaming world. Aidan finds himself cyber-obsessed with a young woman with serious online gaming skills named Daphne, whose actual job description includes trolling online for acolytes who will provide free viral marketing, creating word-of-mouth buzz for her company’s next release. It’s a job she’s ruthlessly good at.

Thus, when graffiti starts showing up on her school's entry walls, Nina is the only faculty member who comprehends what the CUCUCU tags are referring to: a version of Hell (and a variation of the gamers’ #seeyouinhell hashtag) that will be the centerpiece of UnderWorld, the latest golden-egg iteration from her father’s multi-player gaming goose. Meanwhile, young Diana knows just enough to realize that her brother was the spray-painting culprit.

How The Chalk Artist’s characters make sense of their shifting worlds is at the center of Goodman’s tale, as each person uncomfortably bumps into his or her opposite. There’s the mother who fears for her son’s future as a gaming addict, and the mother who is cautiously optimistic that her son has found an outlet for his creative talents that includes a 401(k) plan.

There’s the rule-makers who are confident that their word matters above all, and the rule-breakers who know they’ve gained a higher ground. There’s art not meant to be shared beyond its intended recipient (including a gorgeously described portrait created with a few brief finger strokes on a frosty bookstore window), and art that was presumed to have been erased and deleted, but which (legally, if unethically) becomes the property of one’s employer.

There are prizes worth fighting for, and prizes which, once won, feel empty and hollow.

In the end, The Chalk Artist feels not entirely concluded, but more like a midpoint in a collection of ongoing narratives. Despite the threads left dangling, Goodman provides two of her characters with the sense that being acknowledged, heard, encouraged, and appreciated is the best prize of all, for both the giver and the recipient.

And while there are a few characters whose stories don’t pan out far enough to provide more than an unformed gist of their roles (How does Daphne live with herself? Will the evil business champion ever be called out for his unfathomably bad behavior?), the futures of the main characters, if more writ in chalk than pen, seem safely headed in older-but-wiser directions.

Kristin H. Macomber is a writer who lives in Cambridge, MA, and suspects she may be a background character in the form of a middle-aged Fresh Pond Reservoir walker in The Chalk Artist.

The grandfather of an adopted girl travels halfway around the world to discover the meaning of family.

This story of cultural hybridity, immigration, and war pulses with humanity.