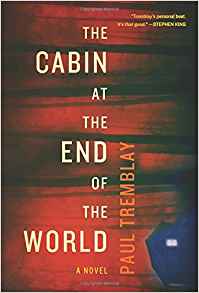 Seven-year-old Wen is collecting grasshoppers outside a remote cabin in New Hampshire when a strange man named Leonard appears. Her fathers, Eric and Andrew, sit on the back deck overlooking the lake, out of sight of their daughter, wondering whether they should check on her.

Wen knows she should sound the alarm about the stranger, but Leonard seems to share her curiosity about grasshoppers, so she talks to him instead. He seems nice. But when three more strangers, another man and two women, arrive on foot wielding homemade weapons, and Leonard says that nothing about to happen is her fault, Wen runs to get help.

Paul Tremblay’s The Cabin at the End of the World opens with this well-trod horror trope: the family terrorized by strangers during a home invasion. All the boxes are checked to assure the readers that there is no easy escape: The closest neighbor is two miles away; the road to the cabin is hardly traveled; cellphone reception is nonexistent. Landlines are cut and tires are slashed.

Even as Eric, Andrew, and Wen hastily barricade themselves in the cabin, it is not much of a spoiler to say that their refuge is far from secure.

But the clichés in this novel are limited to the set-up. Tremblay’s strength is his ability to ratchet up the tension while consistently confounding the reader’s expectations. The reactions of the family are believably predictable, but the motivations of the intruders are complicated and, at times, maddeningly vague.

These are not the droogs of A Clockwork Orange, driven by a terrifying narcissistic hedonism, or the self-centered and maniacal Annie Wilkes of Misery, who just wants a better ending to her favorite author’s latest book.

Instead, Tremblay’s intruders, who say they haven’t met before that day, claim to be driven by a deep altruism. They believe that what happens in this cabin could save the world. But in order to avert the apocalypse, drastic action must be taken.

Given the limited scope of the novel — the entire story takes place in a single day with seven characters and one setting — the hint of global catastrophe lends heft to what could have been a relatively thin plot.

The four interlopers seem genuinely burdened by the weight of their task and the horrors that it requires. They have gotten very specific instructions and are determined to follow them to the letter, though it is unclear whence their direction derived. Whatever cult leader or demagogue set this in motion is unseen, even by the intruders. They believe it is the work of a deity.

While The Cabin at the End of the World can be read as a straightforward thriller, it also can be viewed as a meditation on truth. Every time it appears that something has been explained rationally, doubt is cast upon the logic.

Andrew thinks he recognizes one of the intruders from a violent incident in his past, suggesting this whole episode is driven by homophobia, but Eric has trouble seeing the resemblance. At another time, Eric sees a ghostly figure in the room, but it might just be a symptom of the concussion he suffered during an altercation with the intruders. The world around the cabin steadily darkens: Are these normal storm clouds or the first sign of the apocalypse?

These teases may all be just devices to keep the reader off balance, but in this age of Facebook manipulation and Internet echo chambers, they feel like commentary on our post-truth society, particularly when it is revealed that the intruders first connected online but that they can’t agree on how or why it happened.

The invaders derive their conviction from media coverage of current events that require unique interpretations to confirm their faith. Much like many Americans these days, they see and hear exactly what they want to and little else.

It’s hard to divulge much more about the story without giving away spoilers. The twists toggle between intriguing and infuriating. This is not necessarily a problem given the relentless action and suspense in the novel, but the reader will need to have a high comfort level with ambiguity to not feel adrift before this book is over.

Tremblay presents many questions, but he often shows no inclination to answer them. Some readers might find themselves identifying with Annie Wilkes when they turn the last page, looking for a different ending.

Michael Landweber is the author of the novels We and Thursday, 1:17 p.m. His short stories have appeared in a variety of places, including Gargoyle, Fourteen Hills, Fugue, American Literary Review, Barrelhouse, and Ardor. He is an associate editor at the Potomac Review.

The Word Exchange: A Novel

In this dystopic world where words are bought and sold, Anana struggles to solve a dark mystery and survive a word virus.