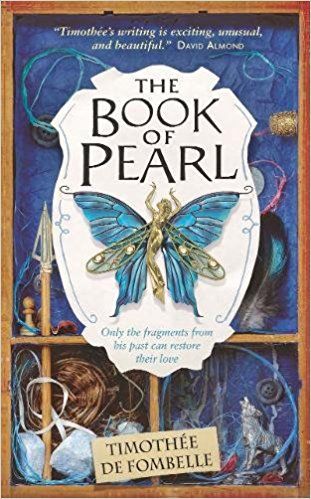 Imagine if all the fairytales you’ve ever heard were true, with each one inhabiting its own unique world outside of the one we know.

Imagine if those worlds could be crossed; if a mermaid’s scale could end up on the neck of a Polish man; if a “seed of a famous apple that had been set in amber to prevent it from poisoning anyone” could be hidden in a trunk in Paris; or if a storybook prince could find himself a soldier in a World War II P.O.W. camp.

This is the world Timothée de Fombelle has created in The Book of Pearl, where scraps of magic linger in distant and broken places, and nothing is quite as it seems.

"As for where Pearl came from, the only thing I’m sure about are these first words, ‘Once upon a time.’”

Iliån is not of our world. His world is a one of fairies and magic, curses and vengeful kings. And yet, one rain-soaked night, he finds himself standing outside of a marshmallow shop in 1936 Paris, with no recollection of how he got there and only fragments of memories of the world he left behind.

The owners of the shop, Maison Pearl, take the boy in and treat him as their own son, Joshua, who tragically passed away two years earlier. Iliån learns the ways of the shop and does his best to fit into their world, but when war comes to France, Iliån takes the name Joshua Pearl in order to enlist, seeing it as his chance to escape and discover his true identity.

Meanwhile, the fairy Iliån fell in love with — the very reason he was banished to our world — follows his every move, waiting for the day when she can be reunited with him.

In another world, Iliån was a secret prince, a threat to the reign of his heartless brother, King Iån, though Iån had not known of Iliån’s existence until they both fell in love with the same fairy, Oliå.

Through a set of twisting, and often convenient, circumstances, Iliån is saved from his murderous brother through exile to our world, while his love, Oliå, willingly gives up her powers and follows him, even though she is forced to remain on the fringes of his life.

After going behind enemy lines to rescue a wounded soldier from his regiment, Iliån is captured by German forces and sent to a P.O.W. camp, where he glimpses his first token of proof of the world he left behind: a mermaid scale looped around the neck of a Polish man.

Thus begins Iliån’s obsession with finding as many tokens as he can once the war is over, filling trunk after trunk with his magical trinkets, believing each one will bring him closer to the world from whence he came. But the only way Iliån and his love can return to their world is if someone tells their story.

Throughout Pearl’s beginning, de Fombelle keeps the reader on that dangerous, teetering edge of confusion and curiosity, handing out bits and pieces of the story like breadcrumbs. It is a disorienting precipice that is only saved by the utter enchantment of the book’s magic and mystery, which compels the reader to journey on into the labyrinth of the worlds into which de Fombelle is calling us.

It isn’t until Iliån arrives at Maison Pearl that the story truly takes off and, by then, de Fombelle has earned the reader’s interest and respect through his masterful display of giving and obscuring information, letting the story simmer and stretch.

The rest of the book from this point on is nearly ingenious in the meticulousness of its craft. In fact, the only thread out of place in this otherwise masterful work is in the handling of the magic system within the fairytale itself. It is the only area where de Fombelle does not apply the same precision of detail, which makes it all the more glaring.

Some of the magical elements are never properly explained, such as when Oliå transforms herself into a weasel in a failed attempt to escape her captors, rather than into the grain of pollen we later learn she could have become, which certainly would have been much more difficult for her captors to trace.

There is also the matter of Taåg, King Iån’s advisor, helping Oliå to escape with Iliån in order to “save his own skin,” which is a confusing and never fully explained motivation considering King Iån made it clear he would kill Taåg if he did not get what he wanted — Oliå. Although these unanswered questions linger in the back of the reader’s mind, the enchantment of the story is so grand and sweeping that they’re easily forgiven.

The Book of Pearl is a true work of art, with de Fombelle interweaving each storyline and plot thread into a modern fairytale that should always and forever be mentioned in the same breath as Hans Christian Andersen and the Brothers Grimm.

Chelsea Bobulski is a contemporary fantasy author. Her debut young-adult novel, The Wood, is out now, and her second novel, Remember Me, will be released from Feiwel and Friends/Macmillan in spring 2019.