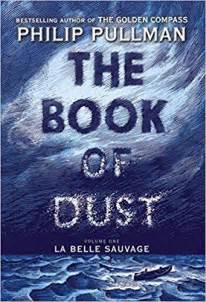 How perfect that my editor had to sign the publisher’s oath of secrecy before sending me the galley for Philip Pullman’s first book in a new trilogy, The Book of Dust: La Belle Sauvage. How perfect that a promise to keep the proof locked away and safe from all prying eyes was required. For this book, like his prior trilogy, His Dark Materials, is about the transformative, sometimes subversive, power of ideas, beliefs, and words.

Speaking of signatures, more than 25 years ago, my daughter first fell under Pullman’s spell. I swear I did not break my oath (and she lives far away), but I did tell her who I was reading. She recalled the magical afternoon her favorite author visited her favorite bookstore, the Cheshire Cat in Washington, DC. Pullman signed her precious copies of The Golden Compass, The Subtle Knife, and The Amber Spyglass. The Cheshire Cat has vanished now, like childhood, like Lewis Carroll’s cat’s smile. But in memory, that was a golden afternoon.

Speaking of Oxford, speaking of magic, there must be something in the water in England that produces writers like Carroll, J.R.R. Tolkien, C.S. Lewis, and Pullman. La Belle Sauvage is set in Oxford, where the young protagonist, Malcolm, is the son of the innkeeper of the town’s iconic inn, the Trout. Pullman is a magician, but also a keen observer of the real world.

“The inn was an old stone-built rambling, comfortable sort of place. There was a terrace above the river, where peacocks…stalked among the drinkers helping themselves to snacks without the slightest hesitation and occasionally lifting their heads to utter ferocious and meaningless screams.”

Pullman’s description, on the very first page, sent me back across the years to my own childhood. I was 10 again, at the Trout, feeding the trout, drinking Schweppes bitter lemon while my parents had stout.

So I was hooked as I began reading La Belle Sauvage, appropriately enough on a recent golden afternoon in Washington, in the Bishop’s Garden in the shadow of the National Cathedral, a Gothic stage set where you can almost imagine yourself in Oxford. I turned the pages like contraband — as though it were a book banned by Pullman’s dictatorial Magisterium.

Here, as in His Dark Materials, the author challenges rigid religious orthodoxy and intolerance, and confronts the cruelty and excesses of power. But it’s a nuanced challenge. Pullman, like his themes, cannot be neatly pigeon-holed nor oversimplified. His beloved grandfather was a vicar, and the author says, “I have always felt that a measure of goodness is not what you believe but what you do.”

The author and a former Archbishop of Canterbury have enjoyed public debates, establishing and exploring points of agreement as well as difference. A debate I would love to witness would be between Pullman, a skeptic with beliefs, and the late Madeleine L’Engle, a believer with questions, and author of A Wrinkle in Time. Both are writers of “children’s literature” that is really for all ages, and ageless.

An intentional modern Milton, Pullman tells his allegory of the battle between good and evil from the point of view of doubt and inquiry. Like all the best myth-makers, he dramatizes the conflict between good and evil with complex, imperfect individual characters making choices, facing consequences, struggling with internal and external danger in the human, natural, and supernatural world.

La Belle Sauvage is timeless, but it is an uncannily prescient and timely book. The cultural climate in Malcolm’s Oxford bears an eerie resemblance to the current insidious increase in intolerance, including those of opinion and belief, on all sides. Young Malcolm has an inquiring mind and friendly nature — which lead him into danger but also protect him. His diverse friends include the “gentle nuns of the Priory of Godstow” just across the river from his home.

The nuns are sheltering a secret: baby Lyra, mysteriously placed with them for protection from the threatening authorities of the Magisterium. And Malcolm has a secret friendship with Oxford scholar Dr. Hannah Relf, who has secrets of her own. She is openly studying a rare alethiometer (a Pullman invention; it’s a truth-telling device, a mind-reader, a heart-reader) in the Bodleian Library’s collection

But Relf is also a secret agent for a resistance group called Oakley Street, organizing to push back against the Magisterium. And she has a further secret — unease with her Oakley Street handler who says there is a “deep and uncomfortable paradox…we can only defend democracy by being undemocratic.”

The complex, dark cultural weather of Malcolm’s world seems familiar, and so does the actual weather. In the early pages of the book, a flood of Biblical proportions, “a hundred year flood” is brewing. The rain comes, and the river rises. Dear reader, prepare to be swept away. Malcolm is in his canoe, La Belle Sauvage, with his friend Alice — and someone else, but I’m not at liberty to tell you whom.

La Belle Sauvage stands alone. Read it whether or not you have read the prior trilogy. Pullman calls it an “equal” rather than a prequel; it takes place before the events of Lyra’s later story in His Dark Materials. He promises two more volumes will go farther.

Whatever your age, this is a book to binge-read, turning the pages fast until you come to the end and see the very last words, “To be continued…”

Ellen Prentiss Campbell’s debut novel, The Bowl with Gold Seams (Apprentice House Press), was inspired by the detainment of Japanese diplomats at a Pennsylvania hotel in 1945. Her story collection, Contents Under Pressure (Broadkill River Press), was nominated for the National Book Award.