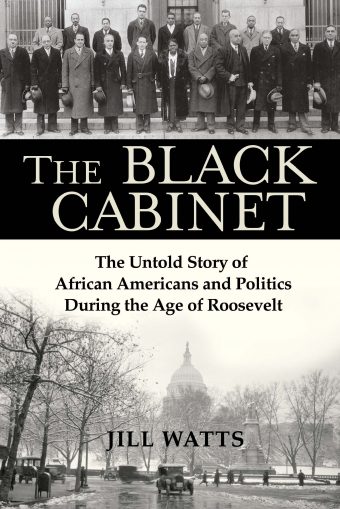 During our time, longstanding gaps in the troubled history of race in America are starting to be filled. The Tulsa massacre, the more than 4,000 documented lynchings, a fuller picture of Harriet Tubman, and the overlooked roles of African Americans in abolitionist insurrections are more and more before us. Now, along comes Jill Watts’ The Black Cabinet: The Untold Story of African Americans and Politics During the Age of Roosevelt with another heretofore largely forgotten chapter.

The author is a California State University-San Marcos history teacher who has published two previous biographies of historic African-American figures. Her latest seems at first glance to be an uplifting story of ambitious, politically astute black strivers joining the higher ranks of American government.

But despite the author’s repeated use of the term “Black Cabinet,” its members were never more than a loosely affiliated group of men who attained advisory positions during the administrations of William Howard Taft and Franklin Delano Roosevelt. The moniker, which surfaced first in 1908, was more journalistic shorthand for the small band that tried, with some limited but largely symbolic success, to influence governmental policies while advancing their own careers and sometimes competing with one another.

The first so-called “Black Cabinet” was short-lived, as the progressive Republican Taft was succeeded by the conservative racist Woodrow Wilson, a man determined to make the world safe for democracy even as he segregated the federal workforce and demoted black officials.

A generation later, a newer breed of well-educated, mostly light-skinned black men attained largely advisory positions in the New Deal. Other than a few who gathered for regular poker games, they were a disparate lot scattered throughout the burgeoning bureaucracy who, despite their efforts, seemed to have little actual influence in the policy arena. To imply that they were Roosevelt’s “Black Cabinet” suggests some direct nexus with the president that didn’t exist.

Ultimately, it took an African-American woman, the formidable educator and civil rights activist Mary McLeod Bethune, to bring these men together into a more cohesive, yet still limited force. Watts begins her book with Bethune, who directed the office of Negro Affairs in the National Youth Administration, and she devotes much of the second half to Bethune’s triumphs and frustrations. Bethune is such an important part of the story that one wonders why the book isn’t titled Mary McLeod Bethune and the Black Cabinet.

As the author herself notes early on, before Bethune’s arrival, the “Black Cabinet” was “an informal group of federal employees” who “operated independently in their various programs” and “were often divided by internal rivalries and personal conflicts.”

Unfortunately, Watts’ repeated use of the term “Black Cabinet” tends to exaggerate the status of its members and subordinate the individual stories of those it is meant to encompass. Until Bethune “took command,” in Watts’ words, the group accomplished little.

What it did do, however, was create a pathway into the civil rights movement of the 1950s and 1960s. Robert Weaver, a prominent member, became the first black cabinet secretary as the head of the new Department of Housing and Urban Development under President Lyndon Johnson. Raymond Pace Alexander, noted in the book only as a Philadelphia attorney, became the first African American appointed to the Pennsylvania Court of Common Pleas — a fact Watts does not include.

This is not the only omission or error in The Black Cabinet. In Watts’ acknowledgments, she refers to the Smithsonian “Institute” instead of the Smithsonian Institution. She writes about Gray’s café as a popular gathering place for black officials in Washington, DC, but fails to name it correctly as Gray & Costley’s Cafe. Elsewhere, Watts writes that most blacks settled in the Northwest section of Washington, DC, ignoring the large African-American neighborhood in the Southwest quadrant. These mistakes are seemingly minor, but they add up and, for a knowledgeable reader, distract and detract from the book’s larger value.

In addition, the author does not provide a sense of place about where so many pivotal events in the book occurred. Though she cites many primary and secondary sources, one wonders whether, during the course of her research, she ever stepped foot in the nation’s capital. The writing lacks local color, scenes, and details that would have enlivened the narrative.

Throughout, names drop in and out, often with little character development. The author gets into the weeds to describe policy disputes, sometimes necessary but a slog for the reader. Most troubling of all, the book seems to lack the passion the subject would seem to demand — until the last chapter, when the author writes of those she collectively calls the “Black Cabinet”:

“Regardless of their rivalries and divisions," Watts writes, "the members, individually and collaboratively, steered, prodded, and pushed the United States into taking a journey toward becoming a more inclusive union.”

Sadly, The Black Cabinet fails to deliver on the promise of its title. That is unfortunate, because Watts has taken on an important but neglected chapter of American history — and, for this, she deserves credit.