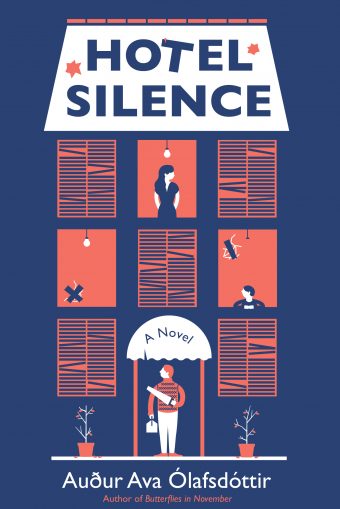 This is a novel as quiet as its title.

Within the pages of Hotel Silence, a reader will find little action and certainly no overt emotions. Instead, the writing’s brilliance is in how utterly relatable it is, how softly human the story of Jónas Ebeneser.

Icelandic author Auđur Ava Ólafsdóttir crafts a beautiful world that seems to Jónas relentlessly slow, meandering, and pointless. He struggles with the banality of day-to-day life, of moving forward after a divorce, and of learning that his daughter is not his flesh and blood.

For most of the novel, Jónas considers ways to commit suicide. Yet he seems unable to stir up the sort of passion in death he desires to emulate, like Ernest Hemingway shooting himself with his favorite rifle.

No, Jónas is more adrift than suicidal. He plans for the end of his life the way others file their taxes: methodically. In fact, at the beginning of the story, he interrupts his suicide by deciding to clean out his apartment and take a “vacation” to a war-torn country, where he will finish his own offing.

He relocates not out of a fear of death or some romantic notion of a grand exit, but because he doesn’t want his daughter to find the body and be forced to clean out his apartment. He thinks practically, not emotionally.

Once arriving in his chosen, unnamed country, Jónas discovers that his carpentry skills are in demand. People need him. He finds himself at a hotel in a land where people are still struggling to return to normalcy after surviving the horrors of war.

All he wants is an anonymous place to kill himself; he has brought his tools along to construct the perfect device for doing so. But he ends up fixing the shower in his room almost by accident, using some electrical tape and a few turns of a wrench. Soon, the hotel’s owner barters room and board in exchange for his tools and hands.

Among other good deeds, Jónas helps a restaurant owner fix his doors and a group of women repair the peeling roof of their home. Through his actions, he becomes, if not loved, at least wanted. Suddenly, suicide is no longer an option, not when people who’ve been through so much are asking for so little from him.

Ólafsdóttir seems to be arguing that it’s not always grief or pain that leads one to suicide, but merely the burden of existing without a purpose. And that, further, everyone has a purpose and is needed somehow. At the hotel, Jónas discovers his momentary purpose; it is, perhaps, enough.

The novel manages to avoid becoming morbid and instead shows the readers how to consider death not as the end but as a release from the burden of being born. Toward the conclusion of the book, Jónas remembers the words of his talkative neighbor: “Does anyone ever recover from being born?...If people were given a say…might they decide not to be born?”

The decision to begin his life is out of a person’s hand; Ólafsdóttir’s tale contemplates the consequences of deciding to end it.

The minimalistic prose — which allows Jónas to be everyman — is Hotel Silence’s greatest strength, and translator Brian FitzGibbon deserves credit. The writing also creates a sense of moving through a fog, as if life itself has become too dense, simultaneously pushing in and on the reader.

Strangely, brief snippets of random prose occasionally trip up the narrative. For instance, “Words have consequences” crops up in the middle of a conversation between Jónas and the hotel owner, interrupting it unnecessarily. Other such trite phrases litter the story. Perhaps these sound poetic in the original Icelandic. In English, they feel like missteps.

Nonetheless, this novel is not to be missed. The overall pace may be slow, but it suits the notion that Ólafsdóttir explores so beautifully: that life need not be exciting; it need only be purposeful.

The Deserter: A Novel

Only avid fans will get through this overly long, dialogue-heavy thriller.