Would you emulate a Nazi if the teacher told you to? Would your friends? 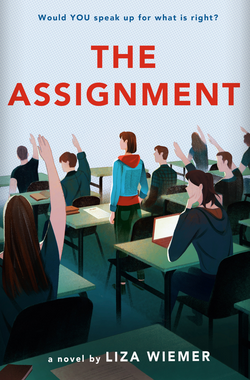 This is your assignment: Read The Assignment by Liza Wiemer. More importantly, have your teenagers and their teachers read it.

This YA novel was inspired by a real-life high school class in which students were made to roleplay Nazis and others at the 1942 Wannsee Conference, the infamous WWII meeting where the Final Solution was debated and agreed upon. Wiemer takes this jumping-off point and develops it into a gripping tale full of characters who spring to life.

The novel is set at Riviere High School in an upper-middle-class, fictional New York town with few or no Jewish families or people of color. Hockey, the prom, and grades are what matter to these kids, most of whom have been in class together since kindergarten.

Mr. Bartley, a beloved teacher who likes to bring the past alive, assigns students in his History of World Governments class to argue either for the extermination of the Jews or for the implementation of sterilization, ghettos, and work camps. Students assigned to be Nazis must “research and analyze five reasons supporting your position of a Final Solution of the Jewish Question.”

While The Assignment is narrated from multiple points of view, Cade’s voice takes center stage. His grandparents are immigrants from Poland, and he remembers stories of how they witnessed atrocities against the Jews in their hometown, and of how his grandfather hid his Jewish friend, Yankel, on his farm. Not surprisingly, he struggles with the assignment.

Cade and his peers are bright students who know of the Muslim Uighurs in China held in concentration camps and the Charlottesville march by white supremacists. They are aware of Confederate flags and decals displayed on some of their all-American neighbors’ houses and pickup trucks. Yet not all of them balk at the task they’re given.

Still, after one teen jokingly raises his hand in a Nazi salute and calls out “Heil Hitler,” Mr. Bartley admonishes him:

“Let me be clear. I am not asking you to be sympathetic to the Nazis. Quite the opposite. This is a serious examination of a historical event. Let’s learn from this moment and be respectful.”

But Cade and his best friend, Logan, are extremely uncomfortable with the assignment. Will they be able to take a stand against their teacher and peers?

The cinematic scene in which they push back against classroom authority and refuse to participate is one that left this reader cheering. In it, Mr. Bartley insists that, in role-playing Nazis, students are simply like actors in a movie. These lines, which end the short chapter, are from Cade’s point of view and illustrate that he and Logan feel differently:

“Logan’s lips part, but no sounds come out. I press my arm against hers. She’s trembling. I look at Mr. Bartley. ‘Fine,’ I say. ‘I’ll take an F.’ And I follow Logan out the door.”

Some other students also push back, but not all. An alternative assignment is offered, although the original still stands. Word soon gets out, the media becomes involved, and the community’s emotions run high. Swastikas appear. Tempers flare.

And at home, longstanding, closely held family secrets are shared that raise the stakes even higher for Cade. Long-ago revelations expressed by his grandmother add an authentic, heartbreaking element to the story.

But it’s the voices and actions of the students who take a stand for what they believe in that truly make The Assignment a must-read.

Caroline Bock’s debut short-story collection, Carry Her Home, was winner of the 2018 Fiction Award from the Washington Writers’ Publishing House. It is now available on Audible and iTunes. She is also the author of the young-adult novels LIE and Before My Eyes.