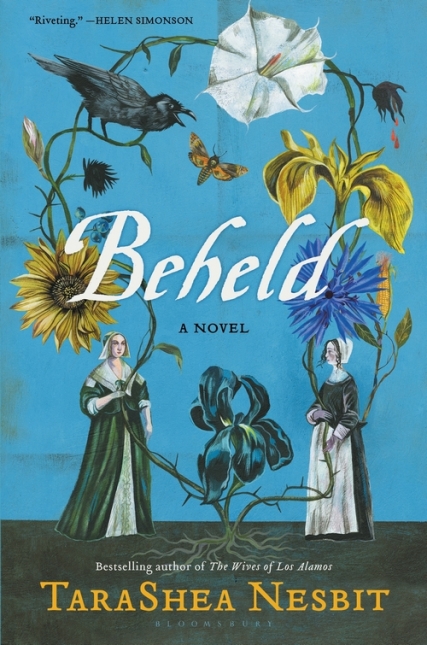 With the release of her second book, TaraShea Nesbit continues her contribution to powerful narration of thwarted women.

Her previous work, The Wives of Los Alamos, which was a finalist for the PEN/Bingham Prize, gave voice to the wives of the scientists dedicated to the Manhattan Project. That novel shows the penalty of potential: the secrets, paranoia, and fear of being indirectly involved in one of the most expansive research projects of modern war and science. It gives the pen to the women behind the scenes who have little control (or so it seems) over their husbands’ decisions or their families’ futures.

In a similar vein, Beheld gives voice to the wives of Plymouth settlers circa 1630 and concentrates on a true historical event: the hanging of a man for murder.

Here, too, the penalty of potential is strong in the husbands’ vision to have Plymouth flourish as a message for England. Two women on opposite sides of society, the governor’s wife, Alice Bradford, and an indentured servant’s wife, Eleanor Billington, show how the same events can be portrayed differently, and how the notion of undeniable truth can be so pliant.

Known in society by their marriages, Alice and Eleanor navigate the settler’s life in Plymouth with vastly different opportunities. Alice is a respected woman with rank and self-discipline, while Eleanor is a young beauty of loud honesty and wanton ways, as perceived by the settlers. In truth, however, their lives are dictated largely by their husbands and their responsibilities as wives.

Alice recognizes her duty to serve her husband, but Eleanor is her husband’s equal in many ways. They both work to get what they can, while both are ostracized and persecuted for their lower status. They are Othered, literally living in a plot of land away from the village.

Eleanor’s narrative shows passion and drive in relaying the events of her life with John, and in speaking against the injustice they experience. They laugh at the perceived “righteousness” of the Puritans in Plymouth: “They’ve made again what they claimed they wished to leave. The only difference is they are the ones in power. They are the ones to blame.” She speaks out against the prejudice and hypocrisy of the town, but she is ignored.

Alice struggles privately with fear and doubt behind a public face. She accepts events as “the way God intended.” Her conviction is a shield against her own secrets and painful memories. She does not know how to handle her weaknesses:

“I newly understood how much I cared for the earthly, how much I wanted it more than what God intended.”

Still, her role in life is prepared for her, and she follows the rules. From Alice’s perspective, Eleanor is a woman who questions too much, who swims against the current, who causes too much worry and distraction by refusing to fall in line with the rest of the women.

Alice sees the Billingtons as a blemish on the accomplishments of her husband’s work in Plymouth. She cannot see that they are the same. The women are locked in their views of each other and their own roles as wives. This unyieldingness reflects the tone of all the characters and of their responses to the horrible events that unfold.

It’s Alice, though, who gets to weigh in and summarize the novel for readers: “We thought ourselves a murderless colony.” In truth, however, the novel is less about the violence of a murder and death than it is about the antagonism of life and community.

What makes the story work is Alice and Eleanor’s braided narrative: We see the horrendous conditions of the journey they both experienced across the Atlantic; we see their children, the ones alive and the ones buried; we see their views of the same events. We see virtue in them, and we feel for them. We want nothing more than for their short seconds of understanding to last longer.

What’s most riveting about this story is the way the women characters self-regulate in the shadow of male authoritarianism. The author herself states that she “wanted to disrupt our collective American imagination, particularly the belief that all the Mayflower pilgrims were religious freedom seekers.”

In this vein, Nesbitt joins other writers of colonial life, such as Nathaniel Hawthorne himself, to show how easily hypocrisy and the Puritan faith merged in society. Eleanor has her own scarlet letter because of her marriage, her social status, and her outspoken bravery.

The Puritan settlers were all different, but they all faced the same challenges, an equalizer in ways not all of them could accept. The Hester Prynnes of the world who questioned were the ones deemed rebellious: an act that still feels all too familiar. The real tragedy of Beheld, then, is not the one murder, but how the settlers kill each other in its wake.

Alice Bradford and Eleanor Billington reflect communal anxieties that are as present today as ever, and they speak to the human conditions of fear, prejudice, and acceptance. The power of the novel becomes what we learn from our foremothers, what they have to tell us.

Bryana Fern is a doctoral candidate in the Center for Writers at the University of Southern Mississippi. She has work published and forthcoming in South Atlantic Review, Harpur Palate, Sou’wester, Entropy, Converge, and Sequestrum, where her story won the 2018 New Writer Award. She has presented on Tolkien studies for the South Atlantic MLA and the International Society for the Study of Narrative.