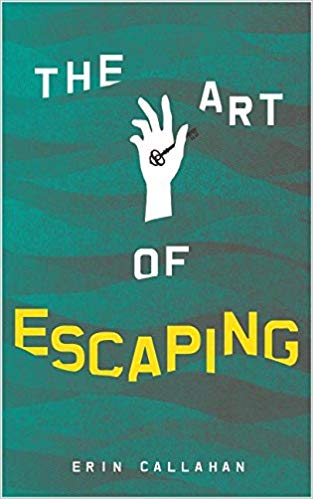 By their very natures, books are something magical — they transport us to a different time and place where we can escape our everyday duties and concerns. Writing a novel about magic, though, can be difficult. It creates an almost meta-analytical environment in which we are required to suspend disbelief on more than one plane. Erin Callahan’s The Art of Escaping does an awkward job of merging these two levels.

The two teenage protagonists of Callahan’s book should be endearing, and we do feel a certain sympathy for them. But both Mattie, the jaded outcast looking for a distraction from her summer ennui, and Will, the popular jock desperate for a change from his smothering routine, are difficult to relate to.

At 17, Mattie still says highly immature things to her mother: “Okay, jeezus…if at some point this summer I find myself within arm’s length of some guy’s thing, I’ll be sure it has a condom on it.”

Will refers to his girlfriend, Betsy, as his “main squeeze” and says things like “Abso-tively” and “Posi-lute-ly” on a regular basis. Put simply, the way they act and talk doesn’t always seem believable, even for awkward adolescents.

The way Mattie goes about tackling her boredom — hunting down Miyu Miyake, the daughter of a famous escapologist, and trying to convince the crotchety recluse to teach her the craft — does feel like something a naive high-schooler would do, but Miyu’s response comes across as highly unlikely.

Despite having hidden away from the world for many years, Miyu allows Mattie into her house and begins to teach the teen about escapology without much resistance. Oddly, she seems to take genuine displeasure in doing so for at least the first few weeks — and Mattie is far from the perfect student. She whines, rolls her eyes, and calls Miyu a bitch on more than one occasion. It’s unclear why someone with Miyu’s temperament would tolerate Mattie’s behavior or, frankly, even her presence.

Will’s story arc is more logical, if not much more engaging. The stereotypical pretty boy with a secret to hide, he languishes in his loneliness until a chance encounter brings him face to face with Mattie in a situation neither can ignore. Awkwardly bound together, the two form a clunky friendship that, with time and trust, becomes a natural, believable connection.

This growing bond is what holds Callahan’s book together. The scenes in which Mattie and Will learn that they are more alike than either of them could have imagined are truly heartwarming; many of us may recall at least one similar instance from our youths.

When Will begs Mattie not to turn into his judgmental mother “when we’re real adults…in our thirties or whatever” (groan!), Mattie admits to feeling a “warmth flooding through me…and collecting around my heart.

“You just said ‘when we’re real adults,’ like we’ll still be hanging out when we’re thirty,” she says happily. “Won’t we?” Will responds with endearing innocence.

It’s these conversations, and ones that develop with other quirky characters who join the circle of friends, that make Callahan’s writing more realistic: She captures how the teens are able to connect on a level beyond the superficial.

Perhaps recognizing that her core characters’ relationships are almost too good to be true, the author infuses a great deal of outside pressure into the narrative. From dodging her mother’s requests to focus on college applications to finding ways to explain her whereabouts when she’s out with Miyu, Mattie’s becoming quite the escapologist in her real life. Will, too, deals with the stress of evading questions from both Betsy and his curious parents. These elements serve to nicely balance out the almost idyllic nature of the friend group at the center of the story.

Naturally, one imagines that these risky endeavors must come to a head, and to a certain extent they do. There are a few noticeable climactic moments, but Callahan misses her chance for a dramatic finish by drawing out and interspersing tension between periods of relative peace.

When Mattie’s parents catch her sneaking around, they barely make an effort to discipline her; when Will tells his parents his secret, they are surprisingly understanding. The author might have done better to make these conflicts smaller in favor of one truly stunning revelation or confrontation.

Erin Callahan’s novel is an adventure on the rocky terrain that teenagers — especially those with hidden lives — must traverse as they develop into adults. Unfortunately, while it has inspiring and heartfelt moments, the book itself feels rocky, too.

A perplexing, rewarding tale of infatuation and erudition.