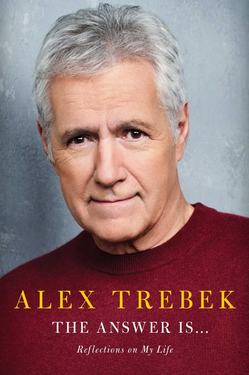 The category is: Farewell Books.

The answer is: “This memoir lists a philosophy of life, rather than the usual puff quotes from impressive names, on its back cover.”

The question is: “What is Alex Trebek’s The Answer Is…?”

The tone of Trebek’s new book is conversational and follows the “Jeopardy!” format. But while the front cover shows a photo of the silver-haired host, the back takes your breath away. Superimposed on sunny yellow are four simple sentences:

These declarations, powerful and poignant, command attention because the quiz-show host is battling stage-four pancreatic cancer, although he objects to the word “battling”: “It suggests there are only two outcomes: winning or losing,” he writes. “If you don’t get well, you are a ‘loser.’ If you have decided to stop treatment, you have ‘given up.’ That’s nonsense.”

Here, Trebek, who has hosted “Jeopardy!” for 36 years, discloses his decision to discontinue chemotherapy beyond his current regimen. No surprise, then, to learn his strategy for wagering in Final Jeopardy mirrors one of General George Patton’s favorite quotes: “L’audace, l’audace, toujours l’audace.”

Trebek doesn’t shy away from the cost his cancer has exacted on his mind and body since he was diagnosed in 2019. “[Y]ou get hit with shock waves — whether pain or unpredicted surges of depression or just debilitating moments of agony, weakness. I don’t have much stamina anymore…Just pain and fatigue and, well, different kinds of agony. Each day brings a new set of challenges.

“The chemo has caused sores inside my mouth that make it difficult for me to enunciate. One treatment turned my skin dark brown, and caused my hair to fall out.” He admits to wearing a hairpiece since 2017 and says he likes the look.

A consummate showman, Trebek manages to continue hosting with brio, despite chemotherapy, and that fact amazes even him:

“It’s the strangest thing…there are days when I’m just a basket case before we tape. I can barely walk to the production meeting. But when…I get on stage, it all changes suddenly. I’m myself again. I feel good.”

His book is an aperçu of short takes on his life, which he acknowledges has been “all good stuff.” No adolescent traumas. No adult catastrophes. Even his divorce was amicable. Born in Sudbury, Ontario, he emigrated from Canada to California in 1973 to begin his climb in American television, which included hosting a variety of game shows that rarely lasted more than 13 weeks.

Then came “Jeopardy!,” followed by syndication, national recognition, and an annual salary of $10 million. During this career rise, Trebek met his second wife, Jean, “my soul mate.” They have two children together.

Readers also learn that Trebek loves luxury cars. He bought his first Bentley (a 1956 Mulliner Park Ward Convertible) for $34,000 — and sold it for $54,000 to finance his divorce. He claims to have since shaken his car addiction: “I am past the age where I need a car to impress people.”

As you’d expect from someone in the entertainment industry, Trebek drops a few names — Rudolf Nureyev, Merv Griffin, Ed Sullivan, Queen Elizabeth, and Prince Philip — but no startling anecdotes. He writes that, whenever he is asked which famous people he’d most like to see on the show, he responds: “Ava Gardner, because she was so beautiful. Mark Twain, because he was so bright. And Ava Gardner again, just because she’s Ava Gardner.”

A bit of fanboy peeks through his polish, too, on the subject of Ava’s third husband, Frank Sinatra, who sent Trebek a typewritten thank-you note in 1987 when “Jeopardy!” created a category devoted entirely to the singer. Trebek framed the note and hung it in his office, saying it was one of “the highlights of my life.”

He pays tribute to several “Jeopardy!” contestants in his memoir, including the biggest all-time winner, who appeared for 16 weeks, won 74 straight games, and walked away with more than $2.52 million.

The answer is: “This player failed to respond ‘H&R Block’ when asked to name the firm whose 70,000 seasonal white-collar employees work only four months a year.”

The question is: “Who is Ken Jennings?” (He’d incorrectly responded, “What is FedEx?”)

Toward the end of Trebek’s book, the categories get more serious:

“What is…Toughness?"
“What is…The will to survive?”
“What is…Getting your affairs in order?”
“The answer is…Life.”

Trebek assures us that he wants to continue living but, when the time comes, he’ll depart with dignity. “I’m not afraid of dying…I’ve lived a good, full life and I’m nearing the end of it. I know that.”