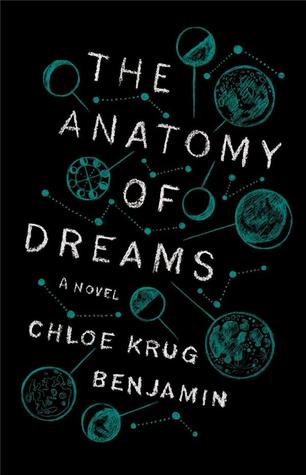 Chloe Krug Benjamin’s debut novel, The Anatomy of Dreams, begins at an East Coast boarding school, where Sylvie Patterson, a studious junior, is dating her oddball classmate Gabe. From the start, Gabe annoys Sylvie with typically boyish behavior, doting on her and then mysteriously withdrawing, sneaking into and out of her room in the middle of the night, and, what especially bugs Sylvie, evincing a bizarre fascination with their headmaster, an imposing psychologist named Mr. Keller.

Soon, Gabe disappears, dropping out of school and Sylvie’s life, leaving her with confused feelings and perplexing questions — and leaving the reader in this state also, because it’s unclear at this point how much of Sylvie’s uneasiness owes to ordinary teenage troubles and how much to a deeper and potentially sinister mystery.

That uncertainty lingers through much of Benjamin’s book, which has all the trappings of a scary thriller, but which skillfully converts itself into something more genteel and, in a way, more methodical: a study of the grim work of growing up.

The narrative skips in time, proceeding through hints and delayed revelations. We learn that the eccentric Mr. Keller is a psychologist involved in edgy research; that Gabe is his apprentice; and that the two men have hatched a plan to recruit Sylvie for their not-quite-kosher experiments — investigations into the sort of sleep disorders that have given comedian Mike Birbiglia so much grief and good material: RBD, parasomnias, so-called “sexsomnia,” and the kinds of outlandish somnambulism that lead sleeping people to wrestle with invisible predators and throw themselves out of windows.

Keller, a disciple of Jungian psychoanalysis, hopes that by teaching his patients the practice of lucid dreaming (the ability to control their dreams), he can cure their disorders by helping them summon up, confront, and defeat the devils that harass their unconscious minds.

Well, we all know where that leads. Ever since Dr. Jekyll turned himself into Mr. Hyde, or anyway, since the psychoanalysts put Greek names to Victorian anxieties, it’s been a rough scene for fictional characters who take a trip into the dark territory of the unconscious.

Sylvie soon befriends a neighbor, Thom, a sexy student of romantic poetry, who warns her that she and her fellow researchers are messing around, in classic mad-scientist fashion, with forces they can’t begin to understand — “dragging [the subconscious] out of its cave,” as Thom puts it, “and shining a flashlight in its eyes.”

The old monsters of myth, purged by rationalism from the external world, have taken refuge in the plumbless caves of the mind, and the result is that self-examination, taken too far, can become tantalizingly treacherous. Start poking around in the subterranean reaches of the self, and you might, like the dwarves of Moria, dig too deep, unleashing horrors on the conscious mind.

Benjamin’s story, despite its gothic potential, carefully pivots away from the pulpy allure of its premise. The fears of the Victorians linger more in our literature than in our lives, and while a story about sketchy dream researchers might seem at first glance to throb with dark urges that we dare not name, the truth is that people nowadays don’t worry overmuch about repressed appetites.

What vexes us isn’t the stifling of our desires, but a superabundance of ways to fulfill them: too many life choices, too many potential lovers, too many violent video games. In one of many intriguing divagations, Benjamin offers the theory that our dreams trouble us not because they’re populated by spooky and elusive symbols (the old Freudian view), but because they’re like giant computer simulations in which we play out potential lives we never got a chance to live —unconscious repositories of roads untaken, risks never ventured, opportunities that won’t come again.

It’s a smart conceit. In these days of Wednesday-night therapy, life hacking, and obsessive self-analysis, we’re haunted not by who we secretly are, but by whom we might have been.

All of which goes to say that what we have here is something like an old-fashioned horror story given a contemporary literary treatment. Make no mistake: As Sylvie pursues her work with Gabe and Keller, she gets tangled in some cracking plot twists. There are sexy midnight trysts, cruel conspiracies, a love triangle, even a multiple murder — and, yes, scenes that blur the border between fantasy and reality.

But through these shocks, Sylvie is troubled mostly by practical questions. Did she pick the right career? Is she with the right guy? Should she drop out of college? What the heck is she doing with her life?

For my part, I wished that Benjamin’s novel had been a little less levelheaded, a little more shameless about exploiting its deliciously eerie premise. Her writing, certainly, is anything but lurid — brought to such a journalistic polish that some passages, especially those giving background on sleep research, have the cool clarity of a highbrow magazine article.

Surely we can’t complain too loudly if a writer avoids the cheap pleasures of suspense in favor of a literary interest in memory and regret. (And the final chapters here, for you Paris Review readers, are satisfyingly wistful). Yet I sometimes longed for this novel about the study of dreams to have more of the chills and suspense, the murky foreboding of dreams themselves.

A Quiet Cadence: A Novel

A grisly, searing portrayal of how combat and its aftermath affect Marines in Vietnam.