A sharp portrait of a family’s history and its pain. 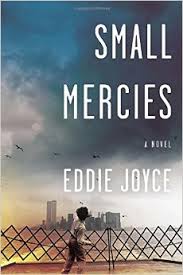 Shared experiences of loss and betrayal within a family often inspire self-inflicted, penitent pain. Yet out of that familial grief can come a shared hope for absolution and atonement. Eddie Joyce’s debut novel, Small Mercies, is about just such a family experience that takes place on Staten Island, where he was born and raised. The story develops over a week, 10 years after 9/11, but at the same time spans several generations of Italian and Irish-American teachers, police, and firefighters who have formed the core of the island’s identity.

The clan, the station, tradition, alcohol, and participation in the NCAA basketball pool at Cody’s Bar are fixed points of reference for Joyce’s characters, even after the construction of the Verrazano-Narrows Bridge. That bridge, connecting Staten Island with Brooklyn, is as much a metaphor for the promise of a different future as it is for  the threat of change and loss, and Small Mercies catalogues those losses — the death of a son, alcoholism, separation, remarriage, aging, betrayal, and shame.

Central to this intergenerational story are Gail and Michael Amendola and their own family histories; hers is the story of an alcoholic Irish father and a detached mother, while his follows an immigrant Italian family and their butcher business. Joyce tells the story through the perspectives of Michael, Gail, their three sons — Peter, Franky, and Bobby (the latter a victim of the 9/11 attacks) — and Tina, their daughter-in-law.

After a stint in Vietnam, Michael became a firefighter. “It was a calling, something sacred.” He felt he was “a knight in modern armor, fighting not the dragon, but the dragon’s breath and all the horror it spreads.”

Gail Amendola is the keeper of the family’s hopes and dreams. She ricochets off the surfaces that are her husband and her sons. There is Franky — “a drunken ruined memorial to his dead brother.” And then there’s Peter, about whom Gail is certain “his whole life is a rejection of her, of his own family, of how he was raised.” By contrast, she cherishes her memory of Bobby, “easy as a hammock, her Bobby Boy.” And about Michael she asserts, “Not everything about your husband should make sense,” but all the while, she wishes he would.

The yeast of this story, though, is Bobby’s widow, Tina.  Bobby, a firefighter like his father, died in the World Trade Center 10 years before. With enormous trepidation and guilt, Tina acknowledges to Gail that she is in a very serious relationship, and she wants the whole family to meet the man, Wade Alderson, at Bobby Jr.’s ninth birthday. This event exerts critical pressure on all the grief, loss, and maladaptive behaviors the family has used to scaffold themselves through the years. Tina’s new relationship suggests the potential of a new family alignment that can give others permission to seek reconciliation, peace, and forgiveness — a way forward.

The narrative of Small Mercies has some real strengths. While giving voice to six different family perspectives, the author liberally employs flashbacks to develop substantive and generally well-drawn life histories, which undergird the characters.

Joyce has a keen eye for the familial culture of Italian/Irish tribes on Staten Island and how it informs his characters’ development. He has an insightful and descriptive touch. For example, Michael thinks about himself, “He’s an old man. That’s what he tells himself, and old men have earned their foibles.” The author’s observation of the Amendolas’ daily life is at times achingly elegant in its simplicity and honesty through the use of impressionistic fragments. Gail takes “A quick look in the mirror. Not for vanity, not anymore, but for its older sister: dignity.”

Joyce has written characters I can care about; he asks me to reflect on shared and inevitable losses — death, aging, estrangement, shame, regret, and distance. Unfortunately, he describes a number of gratuitous intimacies (Peter’s affair or Franky’s sexual self-absorption, for example) that seem two-dimensional, somewhat melodramatic, and clichéd. In that regard, some authorial restraint might have provided a more poignant understanding of the very real nuances of his characters’ struggles.

Still, Joyce holds out some hope in the face of the Amendolas’ grief and of the disparate ways each processes familial pain. He has created an intimate, familiar, and appealing story of tribal longing for safety, fealty, and permanence, juxtaposed against a self-actualizing drive for independence, a challenge to all that the family holds dear. Even in Joyce’s narrative about pain and grief, the Amendolas and the reader can find some measure of gratitude and solace in the residue of small mercies that provides a glimmer of hope and redemption.

This collection of pandemic tales casts the lockdown in a new light.