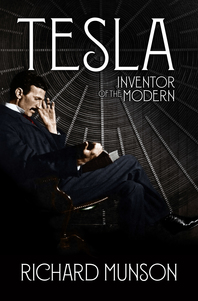 Electricity, Edmund Morris observed in a 2012 essay on Thomas Edison, is a kind of primal enigma, powerful but invisible. Its effects can be seen and felt but “it has no color…no character.”

It’s hard to imagine a less apt description for Nikola Tesla, whose life, offered as a novel outline, would prompt any editor to send the author packing. But as Richard Munson’s brisk, entertaining new biography makes clear, Tesla was and remains an enigma of sorts, testing our notions of genius, fame, even the coherent personality.

As one example, he may well have made the first X-ray image in human history — it was of Mark Twain’s hand — and this is not in the top 10 things Tesla will be remembered for, assuming he is remembered at all.

Munson lays out this thoroughly researched volume chronologically, each chapter linked to a city. The peripatetic Tesla was born in what today is Croatia, at the stroke of midnight during a thunderstorm (accompanied by a lightning bolt, it’s tempting to say, and as Tesla himself claimed, though he was perhaps not in the best position to recall).

He worked in Budapest, New York, Pittsburgh, London, and Chicago, amassing some 300 patents and inventing so feverishly (at times literally so) that one might think his name would be forever linked with Einstein’s and Edison’s.

Seventy-five years after his death, though, it is not. Tesla was world-famous once, but in 2018, his name tends to bring to mind Elon Musk’s car, or perhaps an 80s metal band. Munson doesn’t dwell on this twist of cultural memory, but he demonstrates in considerable detail why it shouldn’t be so.

One reason for the historical amnesia may be that Tesla, alongside his striking list of personal dualities — the dapper ditch-digger, the shy showman, the famous footnote — was Edison’s opposite in two important ways.

The Wizard of Menlo Park, Tesla’s hero-turned-rival whom he met on his second day in America, was a master at funding and public relations, while Tesla was miserable at making and managing money. Typically, out of loyalty to his benefactor, George Westinghouse, he once tore up a contract that would have made him a vast fortune.

The two men, obviously both brilliant, also worked very differently. Edison came to his discoveries by teamwork and painstaking trial and error, afterward promoting and defending those inventions vigorously.

Tesla worked best alone and was subject all his life to visions, “flashes” as he called them, in which groundbreaking ideas arrived complete as if drawn in the air by some “borrowed mind,” to use his own description of a robot.

This is not to denigrate Tesla’s work ethic, for he was capable of fanatical effort and concentration. In school, he studied from 3 a.m. to 11 p.m. seven days a week, and when on the trail of an idea, he had a “mania for finishing,” neglecting his health and the rest of the external world until the peculiar music of his mental spheres tuned itself to practical harmony.

In one such eureka moment, witnessed by a colleague (otherwise, it might cause a reader to suspect fabrication), Tesla walked out one evening after grappling all day with an electric motor problem, reciting poetry — “Faust,” of all things — when “the idea came like a flash of lightning and in an instant the truth was revealed: He grabbed a stick and quickly drew a diagram in the sand of an innovative motor that utilized a rotating magnetic field. ‘The images were wonderfully sharp and clear and had the solidity of metal and stone,’ he said.”

Installed in a laboratory, however, with teammates and a salary, Tesla chafed and became bored. And he cared little for the public competition of ideas, for claiming to be first and best loudly and often enough to carry the day. So while Tesla decisively won the “War of the Currents” pitting Edison’s direct current against his own alternating current, which we all use today, he lost the PR battle.

And not just against Edison. “Eight months after his death,” Munson tells us, “the U.S. Supreme Court finally ruled Tesla as the true inventor of radio” — a distinction that most schoolbooks still accord to Marconi.

Tesla died in debt, penniless and feeding pigeons, and he suffered from phobias (germs, pearls, and much else) and was very likely obsessive-compulsive. But however well this might accord with our stereotyped notions of genius as tormented and alien, Munson is never lurid in treating this side of his subject, wisely showing us not only Tesla’s quirks and foibles, but also how much we owe him for an astonishing array of inventions that permeate the modern world: radio, remote control, robots, lasers, loudspeakers, the list goes on.

A tribute upon his death by the New York Sun called Tesla “an eccentric, whatever that means,” and went on: “He was seeing a glimpse into that confused and mysterious frontier which divides the known and the unknown…Probably we shall appreciate him better a few million years from now.”

This generous, penetrating portrait should move that timetable up considerably.