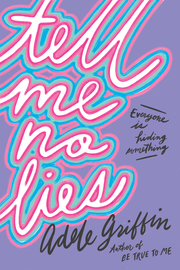 It’s October 1988, and Lizzy Swift is finally in 12th grade at her all-girls high school. She was promised glamor and excitement, certain that, at Argyll, "there was no bigger prize" than being a senior.

But now, all she feels is tricked.

So far, the year has been just like every other; she hasn't taken part in any of the big moments that she always thought would make up her senior year. Instead, Lizzy is busy filling her transcript with items to add to her Princeton application.

She studies to stay on the honor roll, works on drawings for her AP art portfolio, and tries to convince her best friends and fellow nerds, Gage and Mimi, to step outside of their comfort zones with her. But athlete Gage is happy just marking time until college, while Mimi's free time is spent chatting with her boyfriend.

Lizzy used to think all she wanted was to blend in, to make it easier to pretend no one knows about her epilepsy. It's been years since she had a grand mal seizure during chorus class, after all.

Since then, Lizzy has managed to largely ignore her condition, never talking about her medication, the doctor, or the risk of seizures that makes her parents overprotective. But she's constantly on guard, always waiting for her next seizure. And being dubbed "spaz" by popular Wendy Palmer hasn't helped her social standing.

(While Lizzy's epilepsy plays a large role in her character arc, readers may lament that there is no author's note included to detail the research and resources Griffin may have used to try to authentically portray the condition.)

Lizzy is as shocked as anyone when new girl Claire Reynolds chooses to lavish attention on her, first with shared eyeliner and later with secret trips into the city. Claire is effortlessly cool in a way Lizzy desperately wants to emulate.

Of course, Claire has her own secrets about why she came to Argyll during her senior year, but Lizzy is so thrilled with the friendship that she's willing to overlook Claire's secrecy.

She also keeps picking up the tab for Claire, despite the fact that Claire and her divorced mother now live with their extremely wealthy aunt and her 16 cats. These, Claire explains, “had the run of the house and could do anything they wanted, plundering like pirates, knocking over vases, scratching curtains and portraits, sleeping anywhere.”

Despite her misgivings about Claire, Lizzy treasures their friendship, as it allows her to present a new version of herself for the first time in years. Her newfound confidence even leads Lizzy to date a longtime crush, Matt Ashley.

But even with their obvious chemistry and affection, which Griffin sweetly shows on the page, every time Lizzy and Matt try to connect physically, it feels like something is off — especially during an awkward hand job that seems to push them further apart instead of bringing the couple closer together.

Is it because Lizzy skipped third grade and is the youngest in her class? Or is something else making Matt hold back every time they're alone together?

While Lizzy's focus for most of the novel is her relationship with Claire and Matt, she — and readers — come to appreciate the constant and familiar presence of her best friends, who support her even as they struggle to understand her changing tastes and attitude.

Attention from Mimi's older brother, Theo, a college student and model described as a "Korean James Bond," is a confusing addition to Lizzy's rather overfilled senior year, as their once-easy friendship shifts to a more intense flirtation.

This YA novel about the excitement of new relationships and experiences plays out against the backdrop of fear and paranoia surrounding the AIDS crisis and the shifting norms and politics of the times.

Offhand references to Keith Haring, Joy Division, and other key figures of the period further help set a scene which may feel very remote for today’s teen readers. Plot threads, including sexual abuse by a teacher, closeted gay teens, and the constant fear of HIV, are timely given the setting, if somewhat unnecessary additions to this already jam-packed novel.

Still, Tell Me No Lies is an atmospheric ode to the joys of self-discovery and true friendships. It’s an ideal choice for anyone interested in the 1980s or looking for a compulsively readable piece of historical fiction.

The Tattooist of Auschwitz: A Novel

An improbable (but mostly true) tale of love in a Nazi death camp.