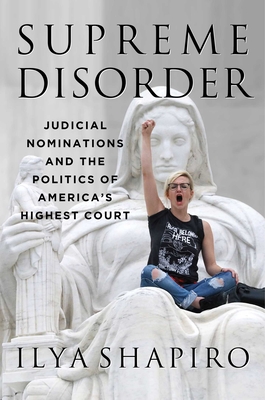 “My, how times have changed,” Shapiro writes.

To be sure, Shapiro explains that any number of Supreme Court confirmations over the past 225 years have been difficult and acknowledges that more than 40 of the 160-plus nominations to date failed — whether rejected like two of Nixon’s nominees, Haynsworth and Carswell, or left unacted on by the Senate, like Merrick Garland.

The list of unsuccessful nominations stretches much further back than the recent partisan battles over Republican nominees since the Democratic-controlled Senate rejected President Reagan’s nomination of the arch-conservative legal scholar Robert Bork in 1987. Indeed, it begins in 1795 with the Senate’s rejection of George Washington’s nomination of John Rutledge to be chief justice because of Rutledge’s criticism of the Jay Treaty, negotiated by the former chief justice himself, John Jay.

Shapiro believes, just as many Republicans and conservatives do, that Democrats have ruined the confirmation process beyond repair by using smear tactics — phony accusations of sexual misconduct — to try to defeat Clarence Thomas in 1991 and Brett Kavanaugh in 2018. The Thomas hearing he calls a “travesty,” Kavanaugh’s “a circus.” To be sure, those episodes were qualitatively different from past confirmation fights, thanks to televised Senate committee hearings and million-dollar ad campaigns by the opposing sides.

Writing before the relatively smooth confirmation of Justice Amy Coney Barrett, Shapiro argues that something has to be done to de-escalate the confirmation wars. He is open to one of the proposals under discussion — term limits for justices — but views that step as inadequate to the purpose. Instead, he wants to persuade Congress, the White House, and the Supreme Court itself to stop making weighty nationwide policy decisions in Washington and to leave legal and political issues to the states. “Let California be California. Let Texas be Texas.”

Shapiro argues, in effect, that indigent criminal defendants like Clarence Gideon may be entitled to court-appointed lawyers in Florida, but not west of the Pecos in Texas. In the same vein, he would have the Supreme Court grant interracial couples like Mildred and Richard Loving the right to marry in Virginia, but not in any of the other 15 states with anti-miscegenation laws on the books as of the 1960s.

A weak-kneed jurisprudence along those lines would be a mockery of a Constitution written in the name of “We the People of the United States of America” (emphasis added). It would also bear no allegiance to a flag that stands for “liberty and justice for all,” not just some.

In short, the Supreme Court necessarily establishes constitutional rules for the entire country, not just the parties in an individual case. The legal and political stakes are necessarily high and have been recognized as such by presidents and senates alike beginning as early as the 1790s and continuing to this day.

Supreme Court nominations and confirmations “ain’t beanbag,” so the gloves come off in no-holds-barred contests. The high stakes explain why the Senate’s Republican leader, Kentucky’s Mitch McConnell, adopted one rule for election-year nominations in blocking Garland in 2016 and a contradictory rule to expedite Barrett’s confirmation four years later. “Power, not principle,” as Democratic senators complained to GOP colleagues incapable of being embarrassed by the hypocrisy.

Shapiro undermines his fundamental thesis by acknowledging and detailing the pitched battles over Supreme Court seats through the years. The thesis of a broken confirmation system sags further, however, because of the favorable reviews of Barrett’s abbreviated, month-long confirmation process from both sides. The Judiciary Committee’s Republican chairman, South Carolina’s Lindsey Graham, closed the committee’s final meeting by complimenting Democrats, in his words, for “not playing the Kavanaugh card.” His Democratic counterpart, California’s Dianne Feinstein, returned the compliment by praising Graham for presiding evenhandedly over four days of hearings.

Shapiro voices the widespread discontent over what he calls the “modern age of judicial politics.” The process has become disorderly indeed, as he puts it in his title. But in the end, he offers no solution. Worse, he fails to acknowledge that the “modern” era began when one political party, the Republicans, decided, beginning in the 1960s, to make the Supreme Court a political punching bag and to push the ideological envelope in nominating would-be justices.

Shapiro notes, but only glancingly, that one pre-modern Republican president, Herbert Hoover, nominated three mainstream jurists for the highest court “based purely on merit” — Benjamin Cardozo, Owen Roberts, and Harlan Fiske Stone. Archie Bunker, it turns out, was quite right: “We could use a man like Herbert Hoover again.”

The master of the quick-read history offers an excellent biography for both the young musician and the adult who are curious to know more about the fascinating composer.