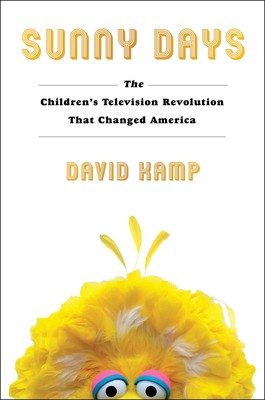 First things first: I grew up in front of the television during the 1970s, so I am the perfect audience for David Kamp’s insightful Sunny Days: The Children’s Television Revolution That Changed America. Kamp does not disappoint the reader seeking joyful childhood memories.

In Sunny Days, Kamp examines the shows that remade American children’s television, including “Sesame Street,” “Mister Rogers’ Neighborhood,” “The Electric Company,” and, yes, even “Zoom.” It is almost impossible not to feel a warm blanket of nostalgia draped over you as you read; Kamp delivers a sense of comfort and familiarity on every page.

The creators of these shows were in the right place at the right time. A growing national progressive political tenor, government recognition of the importance of early childhood education, and foundation funders who sought to make a difference collaborated to harness the increasing power of television. They sought to create a new form of children’s program — one not focused on mindless, pie-in-the-face slapstick, but rather on the controversial concept that children mattered, and that they were worth educating if we wanted to create a better world.

It all started with a dinner party. Joan Ganz Cooney, then a publicist for CBS, hosted Lloyd Morrisett, a vice president at the Carnegie Corporation. Kamp writes:

“Deep in conversation at Cooney’s New York apartment, they identified a social problem, that poor children were entering kindergarten without the learning skills of their middle-class counterparts, and a potential solution, to use television to better prepare these disadvantaged kids for school.”

Imagine if all dinner parties were so profound and impactful. Imagine if everyone cared about children less privileged than their own. Left behind, often in an urban wasteland, young children of color lacked the educational opportunities enjoyed by their wealthier, whiter neighbors.

This project was no half-baked whim: Kamp outlines how the Children’s Television Workshop pioneers conducted focus groups of educators and child-development experts to determine how they could most effectively close the achievement gap — a tragic term then and now — using television. Much work went into planning shows such as “Sesame Street,” the better to maximize their impact on their young audience.

Sunny Days is a love letter to the increasing influence of television. Indeed, many of those leading this revolution were veterans of the medium. Cooney had worked for NBC and CBS. Fred Rogers had been on television for more than a decade before his eponymous show launched. Even “The Electric Company” engaged the services of notables such as Oscar-winner Rita Moreno, up-and-comer Morgan Freeman, and noted actor Paul Dooley (80s kids, he was Molly Ringwald’s dad in “Sixteen Candles”). Dooley, in fact, served as one of the head writers.

What these actors had in common was their conviction that children were important. As Moreno relates in the book, “I talked to actor friends, and every last one of them said, ‘Don’t do it,’ the idea being that this might very well put me in a category where I might not get to play dramas anymore or be cast in anything but other children’s shows. I thought about it very carefully, and I (then) looked into my beautiful little girl’s face.” Moreno had no choice but to accept.

The book doesn’t highlight only the rosy aspects of this budding new phenomenon, however; it presents the inevitable push-pull of progressive advancement in a fair light. Women’s rights groups felt that female “Sesame Street” characters were less fully developed than their male counterparts. African-American groups expressed concern over the stereotypical depiction of Roosevelt, the “black muppet,” and Latinx groups bemoaned a dearth of characters that looked like them. The Children’s Television Workshop team, to their credit, took those criticisms to heart and worked to improve their product.

Kamp effectively reminds us that the 1970s were a time of hope, albeit a reality-based one. Unlike more starry-eyed 1960s idealists, the dreamers of the 70s saw the world as it was, he argues, and this included an often gritty, rundown urban landscape. “Sesame Street” gave us a typical city street (well, as typical as a street with a giant yellow bird living on it can be). Yet on that street, magic was possible.

The author shows us that we have come far: Cross-cultural representation, so new back then, is now much more common. He also reminds us of how far we have to go. African-American and Latinx students’ test scores continue to lag behind those of their white and Asian counterparts. And a large portion of children’s programming is still driven by commercial interests and product sales.

Perhaps we need a new TV revolution to lead us out of the desert for good.