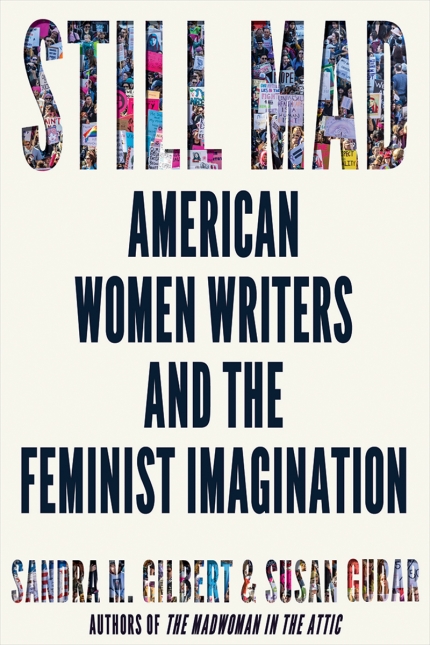 Literary critics Sandra M. Gilbert and Susan Gubar, in this follow-up to their The Madwoman in the Attic, offer a comprehensive, sweeping engagement with voices from the tradition of second-wave feminism. Spanning the 1950s to the present, Still Mad contextualizes — historically and personally — the works of singers, poets, essayists, and prose writers while exploring the creativity that started on the page but moved far beyond it.

In their introduction, Gilbert and Gubar outline their intent to feature works which “they consider to be the ongoing second wave of feminism,” as they believe “the debate in which women continue to engage swirls around the issue of how many ‘waves’ of feminism there have been.” While that’s a questionable assertion (perhaps this debate is taking place in the rarefied halls of academia), parsing the conversations surrounding the feminist zeitgeist decades ago is important to understanding the choices the authors make regarding which writers to include here.

Still Mad is striking in its breadth and scope but especially in that selection of authors. Structurally, Gilbert and Gubar write chronologically, which enables them to trace the fluidity of the featured authors’ thinking. For example, the section on Audre Lorde follows her career from “lesbian biomythographer” to one who “dismantles the master’s house.”

Aside from a couple of questionable diversions, such as interludes on the (mis)education of Hillary Clinton and the Trump presidency, Gilbert and Gubar stay the course of weaving together passages from literary pieces, quotes from people in the writers’ lives, and keen sociocultural analysis. And while there is clearly a bias toward poetry, Still Mad impresses with the creativity of its selections (for example, Nina Simone is featured) and the compelling way it makes connections between seemingly disparate currents in the feminist movement.

The book’s deep dive into Adrienne Rich (including her tenuous-at-best link to Judaism) isn’t quite as interesting as the section on Audre Lorde, in which the authors capture the tension between vulnerability and anger that feminists felt and continue to feel. Lorde’s alienation as a “Black in a lesbian world and a lesbian in a Black world” drove her to ever more ardently seek out words that would rupture those boundaries. When she said that the master’s tools won’t dismantle the master’s house, she was referring to the inadequacy of existing language to disrupt this boundary-making.

So, new words and tools — a new vocabulary — must be forged to chip away at these walls. The title of Lorde’s “Sister Outsider,” Gilbert and Gubar write, reflects “her commitment to the sisterhood of the women's movement as well as her insistence on positioning herself as an outsider questioning its boundaries.”

Still Mad also reveals the way in which activist anger was and is a part of the personal lives of these writers. Lorde, for one, from her position as a poet writing from the underpaid trenches, excoriated the economic injustices that her fellow academics were perhaps sheltered from.

Another especially compelling part of the book focuses on Andrea Dworkin and the sex wars. Few have written about the anti-pornography crusader, whom Gloria Steinem called “an Old Testament prophet.” Gilbert and Gubar capture the separatist movement that Dworkin is credited with starting — one that viewed men’s values as opposed to women’s and which created female-only spaces such as rural communes called “womyn’s lands.”

Still Mad explains the strategy behind Dworkin’s anti-pornography polemics: namely, to legally codify pornography as a civil-rights violation. Regardless of one’s opinion on sex work, there is little doubt that Dworkin was an effective, passionate advocate for elevating the testimony of women actually involved in the sex trade over that of commentary based on purely abstract or philosophical arguments.

A brilliant inclusion is that of Gloria Anzaldua, whose Borderlands/La Frontera (1987) is among the most seminal feminist/intersectional works (and one too often overlooked). Her “mestiza consciousness” is one of the best descriptions of those living in the borderlands of multiple identities. Because this experience is so unmooring and disorienting, Anzaldua uses both linguistic and spiritual-healing practice as a salve to suture the wounds wrought by white patriarchy. She refuses to “accommodate” English speakers, instead code-switching between slang, English, Spanish, Chicano Spanish, and Tex-Mex to build a creole reflective of this unrest and dispossession.

Still Mad is rich and carefully and creatively curated; it is madly in love with words, which remain some of the best tools we have for dismantling the master’s house. The way Sandra Gilbert and Susan Gubar wield them as weapons of personal and political redemption and healing will leave readers speechless.

Glass and Gavel: The U.S. Supreme Court and Alcohol