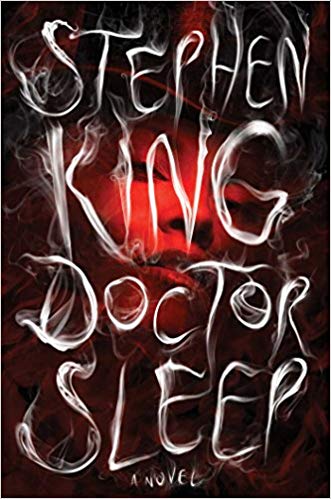 Whatever else you might think of him, Stephen King is audacious. How many bestselling authors would decide, 35 years down the road, to write a sequel to one of their best-known and most-loved early works? This willingness to experiment and take risks is part of what’s earned King the loyalty of so many readers. But some experiments are doomed to fail. Doctor Sleep is one of them.

The Shining has become part of pop culture. But its fame arises, to a disappointing degree, from the Stanley Kubrick film, which differs from the book in important ways. Re-watching the film recently, I found the sound effects the most frightening part, with the possible exception of Wendy’s (Shelley Duval) lack of fashion sense. That and her character’s terminal stupidity had me almost ready to forgive Jack’s (Jack Nicholson) murderous insanity … not that he’ll be outwitting Garry Kasparov anytime soon, either, since he couldn’t even catch a five-year-old in a hedge maze. I was certainly left willing to sympathize with King’s oft-expressed dislike for the movie.

The Shining — the novel, that is — is a modern horror classic because it masterfully combines several disturbing elements. A creepy, isolated setting: the Overlook Hotel, snowed in for the winter and primed for a breakout of cabin fever among its three inhabitants, Jack and Wendy Torrance and their son Danny. A gripping protagonist: five-year-old Danny, possessor of strange powers (he “shines”), including the ability to read thoughts and see the future. The potential for psychological drama: Jack’s history of alcoholism and violence, and the stress of the environment. And finally, an ill-defined malevolence whose source only slowly becomes clear. In such a milieu, the lines separating imagination, sanity and the supernatural begin to blur.

Doctor Sleep has none of these elements, nor any comparable set of equally absorbing others. Dan Torrance remains the protagonist, but in Doctor Sleep he’s a fortyish recovering alcoholic rather than a kindergartener. Getting from Point A to Point B requires backstory, and lots of it: we’re more than a hundred pages in before the real action starts. It’s a choppy beginning, with years sometimes elapsing between adjacent scenes. This is a shame coming from a writer who has shown his ability to write propulsive prose (think Full Dark No Stars).

On the way, old characters from The Shining — Wendy, Dick Hallorann, even the woman from Room 217 — show up for bit roles and cameos: it’s like Elijah Wood and Ian Holm on the set of “The Hobbit.” Since shine-like powers show up in other King works like The Dead Zone, and since Doctor Sleep, for all its flaws, stands alone, tying it back adds little besides complexity.

In fairness, it’s not all backstory. King also uses the lengthy opening section to introduce readers to Abra Stone, the character around whom much of the book’s action centers, and to the bad guys, the True Knot. But each of these elements is flawed.

Abra shines with even greater strength than Danny in The Shining. She levitates spoons. She makes music out of thin air. She even, as an infant, foresees the 9/11 attacks (this was a bit much, I thought). But she’s a teenager when the main action takes place: not nearly as effective a character as a young child whose lack of understanding adds to the horror. (Abra would not be confused about the meaning of “REDRUM.”)

As for the members of the True Knot, they may look like a bunch of fogies riding around in RVs, but actually they’re … well, I’m not exactly sure what. Vampire-like creatures, they rejuvenate by drinking “steam” from dying children. The more a kid shines, and the more he or she suffers on the way out, the more steam is produced. And steam has lately been in very short supply. I think you see where this is going.

The problem, despite the sadistic premise, is that these baddies aren’t scary. Their leader, Rose the Hat, is grumpy and enjoys profanity, but falls short in the evil department. And the members of the True Knot are motivated by the need to survive. (It’s just that surviving requires them to torture children to death. But hey, at least they don’t have to hit the gym and watch their cholesterol!)

Once the story kicks in for real, things improve. We’ve gassed up, grabbed coffee and stuffed our pockets with change for tolls. It’s time to hit the interstate and cruise.

And cruise we do, for a few hundred pages, in great Stephen King style. No one’s ever going to confuse him with Marilynne Robinson, but King is a top-notch storyteller, and he’s doing neat things here. Characters see visions, communicate via telepathy, project into each other’s minds … and it’s never anything less than exciting. He uses a hybrid narrative device/visual effect to convey some of these experiences.

(for instance, when characters send thoughts to one another, they’re often in their own paragraph, in italics and parentheses, like this)

(WHEN ROSE SENDS THOUGHTS SHE’S USUALLY PISSED OFF, SO MANY OF THEM ARE IN ALL CAPS)

(unfortunately, this makes rose seem a little too much like your mom posting on your facebook wall, except with more curse words)

The arc of the story becomes clear early on, but the pleasure is in the journey. King is in firm control. There are plenty of pauses to ensure no one’s been left behind (for instance, a short, obvious line in Italian is translated so as not to lose even the dimmest of readers: Wendy Torrance from the Kubrick movie, say?), but these recaps — often in dialogue form — are rarely bothersome. At the same time, King manages to preserve surprises small and not so small throughout.

Yet the story falters again as confrontation nears and several True Knot members are dispatched to kidnap Abra. These baddies are like the Washington Generals of the supernatural, while Abra is Michael Jordan. Plus Abra has help: from Dan of course, but also Dan’s friend Billy and a small crew of others including — after way too much indignant and accusatory denial — her parents. The Knot is outmatched too early in the story, and too consistently. King even has an epidemic of measles break out among the Knot’s members, which only adds to the lopsidedness. This made me wonder why the good guys pursued confrontation with Rose and the Knot at all, rather than just letting them die out.

(and this is not the sort of question you should be asking while reading stephen king!)

In a note at the end, King writes of feeling “trepidation” about producing a sequel to The Shining, in part because “nothing can live up to the memory of a good scare … especially if administered to one who is young and impressionable.” It’s a fair point. I was 12 when I first experienced The Shining, and so I went back and reread it after finishing Doctor Sleep. The Shining is a superior novel in almost every way. Dick Hallorann, in the movie, tells young Danny Torrance: “Some places are like people: some shine and some don’t.” While Doctor Sleep is a fun experiment that’s entertaining at times, it just doesn’t shine.