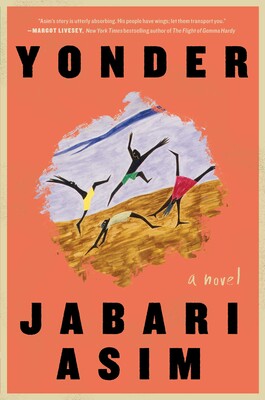 Among the gifts that Jabari Asim provides the reader in his latest novel, Yonder, is that of new language. In a similar vein to Ta-Nehisi Coates in The Water Dancer, offering the concepts of the Tasked and the Quality to describe the enslaved and the enslavers, Asim cuts hard and straight into the heart of the matter and gives us the Stolen and the Thieves.

This is just some of the language that Asim’s enslaved characters use among themselves — with care taken that no Thieving ears can snatch up the words — to remind one another of truths beyond the experience of their daily lives. Their language includes the power of the seven words selected for and spoken to each Stolen infant, to be recited each morning on waking, as well as the story of Swing Low, who helps bring the Stolen out of captivity, and of Buba Yalis, whose incantations allow them to fly and escape misery.

His characters live the novel’s epigram:

“Got one mind for the boss to see,
Got another mind for what I know is me.”

This dichotomy between the façade presented outwardly, as a survival mechanism, and the true self carefully hidden away is at the center of the novel. And while the Stolen must study, understand, and learn to anticipate the thoughts and moods of the Thieves as another form of self-preservation, the Thieves are blinded — indeed, comforted — by their certainty that there is no depth of thought or feeling, no inner life, within the Stolen. For them, the idea that the Stolen are capable of love is laughable.

The main voices of Yonder are William, Margaret, Cato, and Pandora, each of whom speaks for themselves to describe how life and Thieves brought them to Placid Hall, the ill-named plantation owned — along with Pleasant Grove and Two Forks — by Randolph “Cannonball” Greene, a man, as William says, “with too much money, too much land, and too much idle time.”

William is fearless but does not believe in the power of language to change anything; he is a realist who survives by facing the world as he knows it to be. He and Margaret love each other, but William takes care not to get her “bigged,” even though Greene expects it. The cost of enslavement on mothers and children has been seared into William; daily, he sees the damage that permeates every Stolen. He refuses to participate in propagating such misery, and certainly not onto his own children.

He and Cato share a bond of fellowship forged by the injustices of Placid Hall, which include the brutality of Cupid, another Stolen, who has “blood in his eye” from his own horrific experiences and takes out his cruelty on his fellow Stolen as Greene’s enforcer. Cato, though even more damaged than William by Thieves and Cupid, remains open to the possibility of wonder. Both William and Cato look for advice and wisdom from the Ancestors, but it is only Cato who understands to whom he is speaking.

Among the supporting characters are Milton, a young father and talented artist who draws masterpieces in the dirt; Silent Mary, a legendary cook who hasn’t uttered a word since her infant was pulled from her arms when she was 16; and Zander, a boy on the cusp of manhood whose natural ebullience remains undimmed by his circumstances. He is sure that he will soon be able to fly and thus is teaching himself to navigate by the stars.

The story of each Stolen is unique but all share a common thread of violation, humiliation, and heartbreak. Pandora, for instance, is raised as the pet of her half-sister, living in comparative luxury until the other girl dies and her mother sells Pandora off to a pimp. Now, at Placid Hall, Greene’s unbalanced wife — know by the Stolen as Screech Owl — attempts to render Pandora unattractive to Greene by making her dump the contents of Screech Owl’s chamber pot onto her own head every day.

Still, the Stolen are able to create small moments of joy and tenderness for themselves, such as with a baby’s whispering ceremony, but those instances are never entirely their own. They either require permission from a Thief or must themselves be stolen.

And so there is a ripeness among the Stolen at Pleasant Grove for the words of Preacher Ransom, a Stolen with papers showing that he’s been freed. Ransom is able to move among the surrounding plantations, ostensibly preaching from the “Book of Thieves” — the one that gives Thieves permission to “steal and rape and injure again and again but only had to say they were sorry and it would all be forgiven” — but in fact spreading the word to his fellow Stolen of the life that could be theirs “yonder” if they can but muster the courage to go.

“Yonder,” of course, is an area of pure speculation for those who’ve almost never been outside the boundaries of Greene’s holdings. William’s natural mistrust of anything involving hopes and dreams makes him suspicious of Ransom; it is only the conviction of his forged family that finally spurs him to take the chance on something beyond his own experience.

Yonder has been compared to The Water Dancer and Robert Jones Jr.’s The Prophets, a 2021 nominee for the National Book Award. Indeed, the three novels feel as though they belong together, acting as companions on a similar journey. For its part, Yonder’s journey is both devastating and, ultimately, hopeful.

[Editor's note: Jabari Asim will speak at this year's Gaithersburg Book Festival on May 21st in Gaithersburg, MD.]

The Violinist of Venice: A Story of Vivaldi