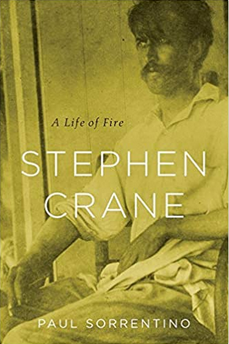 Only readers of a certain age remember when Stephen Crane’s “The Open Boat,” The Red Badge of Courage, and Maggie: A Girl of the Streets, along with other stories from Salinger, Hemingway, and Faulkner,were essential to the canon of middle and high school English classes. Scholars like Paul Sorrentino, however, have never forgotten Crane and his foundational literary role.

In Stephen Crane: A Life of Fire, Sorrentino, an English professor at Virginia Tech University, reflects on Crane’s life and how “as much as any other American Writer in the 1890s, he pioneered narrative and poetic techniques that foreshadowed modern American literature.” His realism provided the literary compass for Norris, Dreiser, Hemingway, and Wolfe, among others. His revolutionary The Red Badge of Courage shaped war fiction like Erich Maria Remarque’s All Quiet on the Western Front, Tim O’Brien’s The Things They Carried, and Ben Fountain’s Billy Lynn’s Long Halftime Walk.

Sorrentino points out Crane’s absence from the popular lexicon of literary fiction, and this erasure of Crane’s literary importance even extends to his birthplace: “Despite many efforts to preserve Crane’s birthplace, the house was torn down and replaced in 1940 with a memorial wall built of bricks from Crane’s home. … After many of the plaques were vandalized, the area was fenced off and sold to a private company. In 1997 workers inadvertently bulldozed what was left of the landmark.” Sorrentino, however, not only recounts Crane’s life but also rediscovers this extraordinary American realist.

In Stephen Crane, Sorrentino lays out a narrative, if not a kind of eulogy, of Crane, drawing on the author’s earlier significant research and new sources that include unpublished letters from the Crane and Peck sides of the family to answer the elusive question, “What sort of person was Stephen Crane?”

To discover that person, Sorrentino leads us through Crane’s life (1871–1900), chronologically detailing key events and influences in his brief life of 28 years, particularly The Red Badge of Courage, the Dora Clark incident, and the sinking of the Commodore. Sorrentino’s research clarifies the often confusing and inaccurate biographies of the past (e.g., Thomas Beer in 1923), which had adversely affected subsequent discussion of Crane. As Sorrentino admits, “Crane’s self-projection [in his writing] complicates a biographer’s attempts to achieve psychological accuracy.”

Still 79 pages of notes and documentation lend a real credibility to Sorrentino’s substantial scholarship. All that evidence aside, from his somewhat avuncular distance and perspective, I could feel his deep appreciation of Crane while portraying an unsentimental and rigorous characterization of his frailties and flaws. Crane was a kind of Peck’s Bad Boy as his “conflicting identities masked his true self, a set of irresolvable contradictions that defined him.”

Sorrentino places Crane in the context of mass immigration, the growth of cities, the end of the frontier, technological advances and societal diversification during the strictures of Victorian America. Crane grew up with parents, who were strict Methodists yet rebels in their own right. Suffering significant boyhood losses — abandoned by his parents because of their religious work, their deaths and that of his adored sister Agnes — he became an outsider who “struggled with his own rootlessness and his longing to create a home he never had.”

Sorrentino takes us on a psychological, narrative excursion exploring Crane’s search “for an earthly and spiritual home.” At once trying to define himself as separate from his ancestral religious legacy, Crane was imbued with his grandfather Reverend George Peck’s dictum that “‘to feel sympathy for the suffering we must put ourselves into their circumstances.’” The author proposes that Crane’s “personality is a yoking together of disparate behaviors. … Crane rebelled against tradition, yet he was proud of his family heritage; he acted like a bohemian yet was drawn to social status; he yearned for the romanticized female yet obsessively sought out prostitutes; he fought with a defiant God yet wished for His presence.” He struggled with his notions of what constituted serious art, the public’s desire for diversion, and his own desperate need for money. With these tensions in mind, Sorrentino takes us through a life fraught with self-defeating attempts to reconcile them and their unintended consequences.

Crane asserted, “How are you going to know about a thing at all less’n you do ‘em.” And “do ‘em” Crane did. His dressing as a homeless person and living on the streets of New York led to his experience of poverty firsthand; his understanding of the Tenderloin District in New York led to his reporting on the corruption of the police; his shipwreck on the Commodore gave rise to the acclaimed “The Open Boat”; his travel to the Nebraska, where he witnessed drought, catastrophic winter, and political corruption, led to his deeper understanding of people and conditions beyond his urban experience; and his correspondent’s experience in the Greco-Turkish War led to his deep understanding of brutality and useless military glory. Crane definitely adhered to his own words: “You’ve got to feel the things you write if you want to make an impact on the world.” Sorrentino tells us that, by 1897, like Henry Fleming in The Red Badge of Courage,  “Crane had not only become a man — he had deepened his humanity.”

Paul Sorrentino has written an excellent biography, comprehensive in content and lively in delivery, while only occasionally stalling a bit over meticulous detail and reminders of Crane’s inherent contradictions. More importantly, he has reacquainted us with Crane’s humanity, his deep flaws, and his artistic courage through an intimate psychological portrayal, a kind of reconstructed memorial, of an artist deeply intertwined with the historical movements of the late 19th century. I could not help rooting for the possibility of Crane’s reconciliation and peace at the end. But that would have romanticized what Paul Sorrentino has made so real and engaging, and what Crane would have detested.

Russell MacMullan is a former English teacher and head of several independent schools. He writes poetry and short stories that are as of yet unpublished.

Winston Churchill: A Life in the News

An intriguing look at how the seminal statesman managed — and often manipulated — the press.