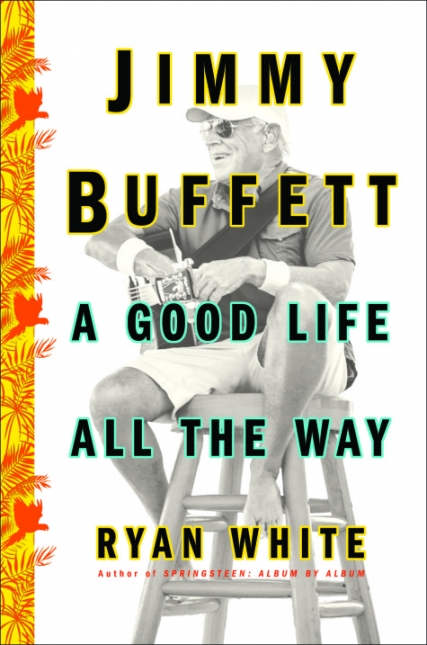 This busy, engaging biography embeds and locates Jimmy Buffett in the fascinating world of the U.S. music industry. Through and around his portrait of Buffett, author Ryan White explores performance spaces, recording studios, key towns in the landscape of American music, life on the road, the culture of fandom, and the unlikely, long career of a true industry oddball.

White examines how the production and promotion of musical recordings and performances works — when it does work. We meet the unsung, the hangers-on, the deal-makers, the suppliers of accommodations for touring performers, the souvenir collectors, and the tycoons.

Buffett’s career of almost 50 years would have been hard to predict at the beginning. Not a trained musician, he kept most of his compositions relatively simple. His performances were part singing and playing songs (often unaccompanied) and part improvised chatter.

Record labels barely tolerated him, mainly because he just didn’t fit into the categories that ran hot and cold over the decades. He wasn’t quite country or rock ‘n’ roll or blues or folk or anything else. His uniqueness gave marketers headaches.

He only really made it to the top of the heap once — with “Margaritaville” — but that once was the culmination of steady, purposeful work and a rare kind of self-knowledge. In turn, his biggest hit and an unexpected degree of business acumen gave rise to an industry that brought in millions, not only through concert tickets and record sales, but also through merchandising, restaurants, resorts, and branded “lifestyle products.”

Buffett developed a persona fashioned by his own needs and interests. He worked hard at looking like he didn’t work hard, and he grew to fit the disguise.

White breaks all this down into pieces. For the most part, his narrative style seems improvisational — scattershot information, names, places, song titles, and applause lines. It is not linear, but the writing echoes, somehow, the seemingly haphazard way that Buffett’s life has unfolded.

White’s chapters rarely create page-turning suspense. Vignettes accumulate and add layer upon layer to the evolving portrait of an artist whose greatest success was the creation of the indispensable “Jimmy Buffett” identity. This was not so much a process of calculation or inertia, but of taking his own pulse and that of his audiences. Some risk-taking here and there, but not too much.

While the iconography of Buffett includes sunshine, tequila, Parrotheads, Key West, the Bahamas, flipflops, and the softer narcotics, it spins off a host of other influences — primarily the music scene encountered in such large and small environs as Nashville, Muscle Shoals, Austin, Mobile, Biloxi, and New Orleans.

The individuals with whom Buffett worked and played receive a great deal of White’s attention. He interviewed just about anyone available to be interviewed. This allows him to shed direct light on Buffett. However, White reaches further, allowing the contours of their own lives to explain, in part, how they blended (or bled) into Buffett’s and to some degree helped shape him — or at least shape his career.

Among the more interesting of these people is longtime Floridian Tom Corcoran, a mystery writer, photographer, publisher, screenwriter, and Buffett intimate who co-wrote a couple of Buffett’s songs. White learned a lot from Corcoran, especially about Key West and Buffett’s connection to that seductive island. Likewise, businessman John Cohlan figures large as Buffett’s partner in the various Margaritaville enterprises. These are just a couple members of a sizeable cast of characters, the side-men (and women) in Buffett’s life.

And that’s without considering the supporting musicians who played with Buffett, especially those in his deliciously named Coral Reefer Band.

The Jimmy Buffett songbook has taken its rightful place in the Great American Songbook, and White shows us how and why. “Escape to Margaritaville,” Buffett’s stage musical that combines new songs with old favorites, is scheduled to open on Broadway in spring 2018. That show and this book should do much to secure the singer’s legacy.