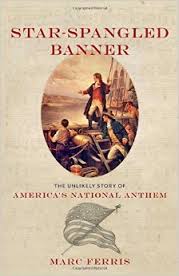 As an American, it’s difficult not to be moved when hearing “The Star-Spangled Banner.” It’s even more difficult, though, to imagine how controversial the song once was. But as Marc Ferris writes in Star-Spangled Banner: The Unlikely Story of America’s National Anthem, Francis Scott Key’s 1814 poem set to music had a lot of competition for the role of the country’s seminal song and wasn’t even declared such until a 1931 congressional resolution.

In his engaging book, Ferris explores the various factors that both made the choosing of the national anthem difficult, and which continue to generate debate about whether this particular tune is the one that should’ve been selected in the first place.

Throughout its history, “The Star-Spangled Banner” has been celebrated by those who believe it shows America’s might and jeered by those who find it too militaristic (if not un-sing-able). Ferris chronicles both points of view in vivid detail, drawing on sometimes little-known historical information to create a fast-moving, enlightening narrative.

For instance, many patriotic types already know that Frederick, Maryland, native Key was inspired to pen his legendary verses after witnessing the British attack on Baltimore’s Fort McHenry during the War of 1812 (where the lawyer-poet observed, among other things, “the rockets’ red glare [and] the bombs bursting in air”).

But far fewer may realize the influence other countries’ national anthems — particularly France’s “La Marseillaise” — had on the choosing of America’s. Ferris compares and contrasts the conditions under which other nations adopted their anthems with those under which America labored to select hers.

The author also outlines the reasons why certain other songs — including “America the Beautiful,” “God Bless America,” and “Hail, Columbia” — were considered stronger candidates for the ultimate honor. (He offers interesting details about why certain songs’ chances were doomed. “My Country, ‘Tis of Thee,” for example, unfortunately shared its melody with “God Save the Queen.”)

As the author makes clear throughout, people do not choose anthems or other national symbols in haste. Instead, we look for meaning and staying power in our icons, whether those icons are carved in stone or, like “The Star-Spangled Banner,” sung en masse.

Megan Wessell is a voracious reader who is proud to call the Washington, DC, area home. Having grown up in Frederick, MD, she fully understands just how awesome Francis Scott Key really is.