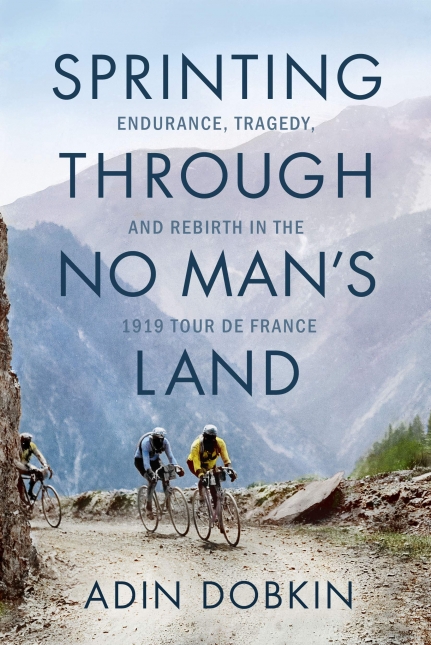 A few weeks ago, a book about bicycle racing, of all things, soared to the top of the Amazon bestseller list. That is a remarkable feat. As anyone familiar with the sports-history book charts will tell you, tomes about professional cycling don’t generally sell in large numbers to American readers.

Amazon is betting big on Sprinting Through No Man’s Land, a work of narrative nonfiction recounting the miserable slog that was the 1919 Tour de France. The retailer published the book via its Little A imprint, then tagged it as an “editors’ pick” for First Reads, an Amazon initiative that offers free Kindle books and discounted print copies to members of its Prime program. By the time of its July 1st release, No Man’s Land had already reached thousands of readers far beyond the insular niche of competitive cycling.

No Man’s Land marks the book-length debut of Adin Dobkin, a Brooklyn writer and podcaster who specializes in war stories. His publisher hopes the book can break out of a niche-sports genre with its story of human endurance set against a backdrop of war, a pairing that paid dividends for Laura Hillenbrand and Daniel James Brown.

Yet, for a narrative arc, the 1919 Tour de France presents an uphill battle.

Le Tour debuted in 1903 as a showcase of superhuman endurance, more dance marathon than athletic event. Early Tours were lonely, brutal journeys. Cyclists carried spare tires on their backs. Mechanical setbacks could leave a rider hours behind the nearest rival.

Cycling buffs argue endlessly over which Tour qualifies as the greatest. Italian greats Fausto Coppi and Gino Bartali famously dueled in the 1949 event. French legends Jacques Anquetil and Raymond Poulidor battled on the mountain slopes in 1964.

Most Americans, though, would cite either the 1986 or 1989 edition as the best. In 1986, American Greg LeMond overcame Shakespearean betrayal by Frenchman Bernard Hinault to win our nation’s first Tour victory. In 1989, the same LeMond recovered from near-fatal gunshot wounds to capture the closest Tour ever, besting Frenchman Laurent Fignon by an impossibly narrow margin of eight seconds.

The 1919 Tour is best known as the race that introduced the maillot jaune, the yellow jersey donned daily by the race leader (although even that distinction remains in dispute). A wartime shortage of dye had drained color from le peloton, recasting the pack as a sea of grey wool. Race founder Henri Desgrange clad the leader in yellow to set him apart.

Half a decade of war had interrupted the rigorous training regimens of professional cycling. Thus, the Great War’s great impact on Le Tour was to send forth perhaps the least-prepared pack of cyclists to ever circle France. Of the 67 men who set out from Paris on June 29, 1919, only 10 would finish. They managed a collective pace of 24 kilometers per hour, the slowest Tour in history.

The pitiful attrition, coupled with seemingly endless mechanical woes, drove most of the favorites from that first postwar race. (Three former Tour champions had died in the war years.) Philippe Thys, a Belgian who’d won the Tour twice, dropped out after the first of 15 stages. Frenchman Henri Pélissier, a future Tour victor, withdrew after stage four. His countryman Eugène Christophe seized the lead and held it for several stages. With just two mammoth stages to go, Christophe led the field by nearly a half-hour. But then, his bicycle suffered a broken fork on the penultimate stage, costing Christophe more than an hour of repairs, and the lead.

The broken fork scripted an anticlimactic ending to the 1919 Tour, leaving the French no Frenchman to cheer. The lead passed to Firmin Lambot — alas, another Belgian. When the riders returned to Paris after 5,560 kilometers of racing, Lambot led by nearly two hours. He would win the Tour again in 1922. Today, he is forgotten even by most cycling fans.

But Dobkin is an elegant writer, and he makes a valiant effort with limited material. Readers will marvel at scenes of athletes setting off at three in the morning on stages that traversed 400-500 kilometers, each one spanning a distance longer than any sane cyclist would pedal. Riders with mechanical setbacks were essentially forbidden help: The cyclist with the aforementioned fork fracture carried his bicycle to a forge and repaired it himself.

Here and there, Dobkin unveils poignant scenes of French fans reveling in the return of their beloved sport. “A cry started from down the avenue and neared the café,” he writes in one. “‘Les voila!’ They’re here! Men and women shouted to others in the rows behind them who couldn’t yet see the cyclists over the mass that was pushing one another on either side of the road.”

In brief and commendable digressions, Dobkin labors to introduce Black and female characters into an otherwise white and male narrative — another tough assignment, as none of the detours seems to intersect the main story.

While long stretches of the 1919 Tour lack dramatic tension, Dobkin builds an eerie suspense near the end as the riders approach the Zone Rouge, scene of the bloodiest battles. He writes:

“On the ground, present but not visible, were the materials deposited by the shells and the violent movement of human bodies, the chemicals leaching slowly from shrapnel and casings. Brooks of blood and flesh and excrement sunk into the ground where it settled before being carried away by an underwater vein.”

Dobkin himself seems never to have competed on a bicycle, and that is a strength. Many cycling writers are former racers, and books penned by cyclists tend to dwell on gear ratios and drafting tactics to an off-putting extent. Dobkin, by contrast, writes like an historian. The reader shares his wonderment as exhausted Tour combatants stop on the roadside at the foot of a climb to remove their back wheels and flip them around to engage a smaller gear.

Sprinting Through No Man’s Land is that rare cycling book that will resonate with non-cyclists, and Adin Dobkin’s eloquent reportage will engage aficionados of the Great War. Despite its dramatic flaws, the 1919 Tour de France succeeded at coaxing a tattered nation out from the rubble to the roadside to celebrate the simple pleasures of peacetime.