South Toward Home: Adventures and Misadventures in My Native Land 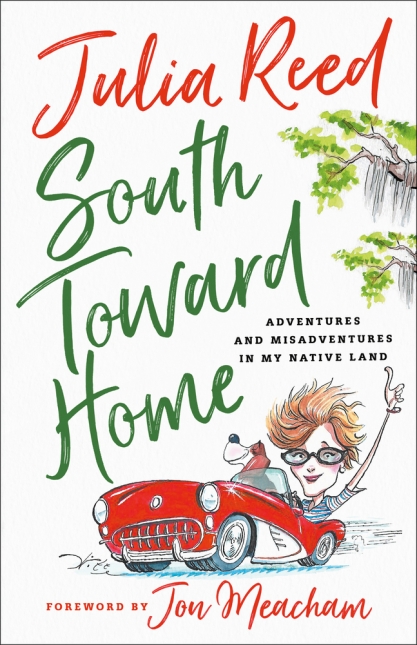 In Julia Reed’s new collection of essays written originally for her Garden & Gun column, she blends David Sedaris-like humor with Southern culinary knowledge, then adds a dash of gentility and a pinch of detail.

Move aside, bourbon. Reed prefers scotch in her highball. Her essays defy Southern stereotypes page by page (no odes to whiskey here) and illustrate the lush, hot, menacing world of the Mississippi Delta. Her unique persona and voice rise above all the best attempts to compare her to other writers. She’s the perfect literary ambassador for the South, its idiosyncratic style of entertaining, and its memorable mannerisms.

In “The Awesome Opossum,” Reed reminds us that the possum is the only marsupial native to North America and, by default, deserves more respect. She delves into its history by focusing on President William Howard Taft’s deep affinity for the taste of this peculiar-looking creature, requesting it at important banquets in his honor.

If Taft’s recommendation weren’t enough, Reed details all the many incredible features of the possum, including its forked penis and its astonishing consumption of ticks (which helps to control Lyme disease). Here, as elsewhere, Reed moves effortlessly between culinary and political history while describing the Southern landscape that the nocturnal possum calls home.

Weaving disparate subject matter with humor, surprise, and playfulness defines Reed’s style. In “Life Among the Serpents,” she retells the story of her hometown wedding in the middle of the Delta, where some of her guests had never stepped foot.

As Reed informs us, the Delta “has up to fifty-five species of snakes, including nine venomous ones.” She later tells the reader, “I saw my first rattlesnake at four, when I almost stepped on it, running from our swimming pool to our house.” At the reception for her wedding, “not a single guest noticed the six-foot-plus-long chicken snake coiled against one of the open doors.”

Morgan City, Louisiana, right next to where Reed grew up, hosts a Snake Bite Triathlon where athletes trek through swamps to win their glory. And, oh yes, there are alligators, too. The essay leads to a reflection on Pentecostals’ handling of snakes, a cliché in many depictions of the South, but one that continues to fascinate everyone from somewhere else.

By the end of the essay, Reed reminds us that the reptiles have lived in the habitat she calls home far longer than she has. And like in “The Awesome Opossum,” she asks the reader to look closely at the magnificence of the Southern landscape and, by doing so, to respect it more.

In a culinary-focused essay titled “Beyond the Butterball,” Reed details how, as a Southerner, she attempted to re-create an historical Thanksgiving meal, but struggled, of course, because the early settlers lacked flour, sugar, and potatoes — staples in the Southern diet.

When cooking a holiday meal with other Southerners, she writes, “Thanksgiving ends up being a forced march down the assorted memory lanes of way too many people.” But she manages to create a meal of duck and oyster dressing with venison, and there’s a clear joy that arises from the challenge.

This might be Reed’s guiding prompt for her essays: Take an interesting, often overlooked Southern subject, explore it with specific detail and research from multiple lenses, and write with a singing style, just like in her essay “Recipe for Longevity,” about the Paleo diet. After reading it, you’ll question your assumptions about current dietary trends and how our ancestors dined, and also engage in a cathartic chuckle about our obsession with life-prolonging miracle cures.

(Reed’s own grandparents and great-grandparents lived well into their 90s and beyond subsisting on Southern staples like bacon, chicken and dumplings, fried catfish and fried chicken, beefsteak, and biscuits. For them, an Old-Fashioned was a daily libation.)

The one limitation of this collection it that each essay follows a similar arc and length — the magazine-column form restricts how deeply Reed can explore each subject she selects. That’s too bad, because many of these pieces deserve more space in which to stretch, to question, and to entertain the reader.

But for anyone unfamiliar with Garden & Gun, this collection serves as a wonderful introduction to Reed’s talent. Her humor, sensory detail, and deep concern for the place she loves resonate page after page.

In the opening essay, “Grace Under Pressure” Reed introduces us to the Madeira School in Virginia, an all-girls boarding school where she happily spent her junior and senior years of high school.

The official motto of the school is “festina lente,” which translates as “make haste slowly.” In South Toward Home, Julia Reed embodies this motto by inviting readers into a collection of short-form essays where they can slow down and marvel at the strange, wonderful world humming below the Mason-Dixon Line.

Sarah Creech is the author of two novels, Season of the Dragonflies and The Whole Way Home (William Morrow). Her short fiction and essays have appeared in various publications, including Lit Hub, Writer's Digest, the Cortland Review, and StorySouth. She’s an assistant professor of English and creative writing at Queens University of Charlotte.

A scholarly work investigating not just the judiciary’s role but also society’s responsibility in the diminution of Fourth Amendment protections.