The Python-turned-director ponders his mortality but still tilts at windmills. 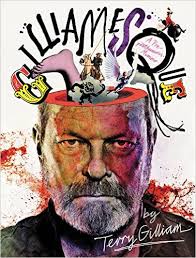 Be warned. You’re going to get some funny looks if you venture outside with director Terry Gilliam’s new “pre-posthumous memoir,” Gilliamesque, tucked under your arm. In a Monty-Pythonesque touch, he’s written “ME ME ME ME ME” in bold red magic marker along three sides of the oversize book, giving it the look of a manifesto scrawled by an unbalanced mind. Which explains why that nervous lady sitting next to you on the Metro just got up to find another seat.

Gilliam’s memoir, like those of the other Pythons, reflects his influence within the comedy troupe. Whereas Michael Palin’s is almost drowning in earnestness and detail, John Cleese’s is cheeky, and Graham Chapman’s is a sprawling, contradictory mess, Gilliam’s drawings are brilliant and the writing closer to pretty good.

In many of Gilliam’s movies — "The Adventures of Baron Munchausen,” "Fear and Loathing in Las Vegas," and "The Zero Theorem" among them — there’s less emphasis on strict narrative storytelling and more on painting a series of cascading pictures designed to convey atmosphere and elicit an emotional response.

Nerds like me expecting troves of insight on the inner workings of Python could be a bit disappointed. Gilliam devotes more pages to his experience as a film director than he does to Python. He even suggests readers looking for that definitive kind of thing check out Palin’s published diaries. It’s understandable in the same way Leonard Nimoy wanted to cover a bit more than Star Trek in an early memoir, I Am Not Spock, while George Harrison felt the same way about the Beatles with his I, Me, Mine.

Early on, the Gilliam story is a mostly pleasant, wry, and self-effacing journey of youthful creativity flowering with a little luck sprinkled in along the way. Gilliam would be the first to admit that he was often in the right place at the right time. However, innate talent and the ability to focus like a laser on a given task served him well then and now. Though he’s too modest to say so, good luck won’t do you much good if you don’t know how to capitalize on it.

If Gilliam’s upbringing in Minnesota and Los Angeles is the memoir’s Act I, with his years blossoming as a cartoonist in London and joining Python serving as Act II, it is in Act III, becoming a “serious” filmmaker, where the memoir becomes most engaging. He shares interesting backstories concerning the making, and sometimes not making, of major motion pictures. The tale of his legendary failure to make a picture based on Don Quixote, for example, is a painful example of life imitating art: Gilliam’s been tilting at windmills since 1999 and has yet to completely abandon his dream of getting the movie made.

Just as Python pushed the boundaries of comedy, battling repressed censors and other forces of blandness, Gilliam has continued that rebellious streak as an innovative filmmaker. Confronting a procession of Hollywood studio meatheads, he's managed to stay true to his own vision as an artist.

Gilliam recognizes kindred spirits. For example, his remembrances of emotionally troubled actor Heath Ledger, who died at the tragically young age of 28 of a prescription-drug overdose, are both revealing and touching. Ledger stared in Gilliam’s "The Brothers Grimm," but died before his second movie with the director, "The Imaginarium of Doctor Parnassus," was completed. Gilliam reveres Ledger, and these reflections produce some of the finest pages in the memoir.

He doesn’t connect them as such, but Gilliam briefly touches on his own mental-health issues. He has suffered long and frequent bouts of “debilitating” depressive interludes that can last six months. Interestingly, Gilliam hasn’t tried to check them with medication or therapy, believing he needs their opposite, or what he calls “the intense clarity of those periods of total engagement…so wonderful that when they end I feel completely blurry and out of focus.”

Without mawkishness, Gilliam also addresses his own mortality. In one eloquent passage, he muses, “Once you reach my age [74], you tend to find that the individual days become really long, but the years get shorter, which only distorts your temporal perspective still further.”

He’s at peace with kicking the bucket, which has already turned out to be handy, having had something of a dress rehearsal in September when Variety reported his demise. After the trade paper hit newsstands, Gilliam apologized for being dead and later told The New York Times that the Hollywood bible's obit was slanted “as most reviews of my films in Variety have been over the years.”

Happily, even in the shadow of the Grim Reaper, Gilliam found a way to fire a protest across the bow of yet another powerful, pompous institution. Good for him. Good for us.

Michael Causey, a past president of Washington Independent Writers, has assigned vast amounts of brain cells to memorizing long portions of "Monty Python and the Holy Grail."