So Much Blue: A Novel 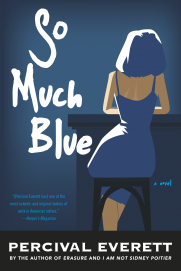 In So Much Blue, our narrator, Kevin Pace, is an aging artist who has been working on a painting, an enormous canvas covered in shades of blue, which he keeps secret from his wife, his children, and his best friend, Richard.

As he recounts three pivotal stages of his life, the reasons for his covert art reveal themselves, and Kevin must come to terms with the consequences of his decisions and how they fuel or hinder his art.

The novel leaps between three time-periods: 1979, where Kevin and Richard travel to El Salvador in search of Richard’s troubled brother; 10 years ago, in Paris, where Kevin meets a young seductress in a café; and the present day, where Kevin struggles to keep his marriage together after his daughter confides in him her own secrets.

The three narrative threads feel disparate at the novel’s beginning, with little in common beyond their shared narrator, but they slowly begin to coalesce and inform each other, revealing and clarifying what makes Kevin tick, and what motivates him to conceal his masterpiece.

The 1979 sections feel the most urgent because of Richard’s lost brother. It’s the plotline with the most obvious stakes.

As artist and academic, respectively, Kevin and Richard are in way over their heads in a country on the verge of civil war. How will they find a missing person here when they can hardly speak the language? They have few leads and zero clues.

It’s when they recruit the help of a private investigator known as The Bummer — a hard-drinking, hard-cursing Vietnam vet who compulsively takes brief naps — the novel strikes its highest comedy. The Bummer intimidates the other men with his short temper and crassness, but they quickly begin to wonder if he’s as competent at finding missing persons as he proclaims.

The Paris sections are charged with the familiar trope of an impending extramarital affair. Kevin has traveled to the French city for work, alone and far from his wife and kids (of course). When he meets Victoire, the recognizable beats of the infidelity narrative might appear hackneyed if not for Kevin’s hyper-self-awareness and self-deprecation.

This awareness makes for an ironic, tragicomic exploration of what happens when a person realizes he has become a living cliché. Kevin knows how all of this looks, but that doesn’t change his behavior, only his self-image (worse) and level of guilt (higher). Like in the 1979 sections, his interiority is at odds not just with his surroundings, but also his own decisions. There is humor, but never without a leftover tang of sorrow.

The present-day sections further complicate the other plots by suggesting that Kevin has been damaged by his past: he obsessively works on a single massive painting, and yet he keeps it hidden from the people closest to him. His marriage is on the rocks, and his relationship with his children lacks warmth.

When his daughter comes to him with a secret, Kevin’s precarious familial dynamics are put to the test, forcing him to confront his past in El Salvador and Paris.

All three plotlines are markedly distinct, and this makes for a vertiginous reading experience — the stark jumps are, at first, difficult to keep up with. But the contrast creates a delightful suspense: We know Kevin gets out of these jams, but we don’t yet know how.

The book spirals around one resigned artist and his unique inner world, but the way his histories fold into one another, firing off unexpected connections and revelations, appeals to the universal human experience.

Author Everett writes with wit and precision. His sentences have the whimsical acrobatics of Michael Chabon, but their restraint and caution recall Denis Johnson. That is not to say that Everett isn’t his own writer, because, in fact, his distinct narrative voice is part of why So Much Blue is such a fun page-turner.

As the narrator, Kevin gets the best lines. He speaks with a voice sharpened for linguistic battle, even in chitchat. For example, he regularly reports his realizations in this fashion: “I was reminded by listening to myself that my charm, what charm there was, lay in my utter lack of charm.”

And when he gets stuck in a conversation with a Yale professor of English about whether or not painting is a language:

“He said something about art not being able to write its own grammar, but rather betrays it in its invention. My response to this was cognac. And when I was good and drunk, I said, ‘A painting is not meant to signify, but to show.’ When I saw him on his heels from my first salvo of nonsense I finished him off with ‘The semantic function of a painting is not a criterion of its aesthetic quality.’ The hit was complete. Had I been a real mafioso I would have slept with his wife.”

Percival Everett has written almost 30 books, a robust body of work by any measure. If So Much Blue is any indication of where he is headed, there very well could be 30 more in the offing. He’s got a great sense of timing, punchy dialogue, engaging characters, and incisive sentences. I will read whatever he writes. You should, too, starting with this one.

Nathan Blanchard is an MFA candidate in the creative writing program at the University of Alabama in Tuscaloosa. His work has appeared in the Missouri Review, decomP, McSweeney’s Internet Tendency, and elsewhere. He was the runner-up in the comedy category for the 2016 Miller Audio Prize.