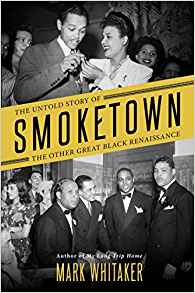 America is a country of migrants: some forced, others voluntary. In Mark Whitaker’s Smoketown, Pittsburgh provides a small-scale version of the nation, a place where migrants came to discover the possibilities of a new and better life.

The author traces his ancestral roots to two grandparents who differed in their Pittsburgh bona-fides — one was an Old Pittsburgher black who arrived before the Great Migration; the other, the 11th child of emancipated slaves — yet found each other and love. The class difference between his established grandmother and his self-made grandfather piqued the author’s interest in their story; Smoketown is the result.

The book revisits the personalities, industry, entertainment, politics, and underground economy that evolved within and around Pittsburgh’s African-American community from the 1920s-1950s. Many of the African-American migrants were Southern-born persons attracted to better-paying jobs and access to education for their children.

The “up south” experiences of Pittsburgh widened the circle of the black experience but did not eliminate the chilling effects of segregation and blatant racism. Yet the insular nature of Pittsburgh’s black enclaves, writes Whitaker, allowed African Americans there to form “for a brief but glorious stretch of the twentieth century, one of the most vibrant and consequential communities of color in U.S. history.”

Whitaker is not the first to establish a multi-cradle theory of the black-renaissance community. The Harlem Renaissance is often the shorthand of choice; however, Washington, DC, Baltimore, Chicago, Boston, and Philadelphia also incubated personalities, neighborhoods, churches, media, and art innovations that spanned the length of the Jim Crow era.

I appreciate Whitaker’s broadening the lens on the black renaissance by spotlighting the lives and accomplishments of average people. The remarkable world of his grandparents beckoned him to explore another dimension of black life that was beautiful, determined, interconnected, and proud.

The ugliness of Southern living as a driving factor in the pursuit of a fraught-yet-better life in Pittsburgh is illustrated in the story of Cumberland “Cap” Posey (Cum’s father). Born in 1858 — and having lost his parents by his early teens — Posey worked along the wharfs of Maryland. He considered the mobility of the steamboat a metaphor for better living.

Through grit and wit, Posey rose to operate a number of vessels, his integrity and skill setting him apart. “As word of his standing spread, he acquired a nickname of respect among Negroes: Captain or ‘cap’ for short.” Posey married schoolteacher Angelina Stevens and relocated to Pittsburgh after racial tensions in his then-home of Athens, Ohio, bubbled over.

Another pioneer, Robert L. Vann, migrated to Pittsburgh from North Carolina in 1909. When he arrived in the Steel City, Vann made his mark in the publishing world. A lawyer disgusted with the derogatory portrayal of African Americans in the local press, he took the helm of the Courier and vowed “not to go yellow like the tabloids.” Among other things, he shined a light on the sad reality that African Americans were disproportionally found guilty of murders and other offenses without adequate due process.

These profiles notwithstanding, Smoketown presents more than black life in Pittsburgh; it also discusses the industry and topography of western Pennsylvania, often to jarring effect. The chapters shift abruptly between unique gems of Pittsburgh history to larger national issues.

For example, the mention of Edna Chappell, a pioneering journalist, presents a snapshot of the inroads black female journalists made in post-World War II America. Yet Whitaker quickly drops her story and moves on to another person. Chappell was an accomplished historian, a challenger of segregation laws, and the first black woman to earn a Ph.D. in history from the University of Pittsburgh. She deserves more attention in these pages.

Still, Smoketown is a good read. Through its chronicling of historical events and the African Americans who experienced them, the book offers an intelligent look at the neglected topic of black life in an industrial city during its golden age.

Ida E. Jones is an archivist and lover of documentary films. She is the author of two books: Mary McLeod Bethune in Washington, D.C. Activism and Education in Logan Circle and William Henry Jernagin in Washington, D.C. Faith in the Fight for Civil Rights. She believes that biographies are transformative stories that provide humans a safe space to learn from others and accept themselves wholly.

Dark Places of the Earth: The Voyage of the Slave Ship Antelope

An eye-opening account of a little-known (yet horrifying) episode in American history.