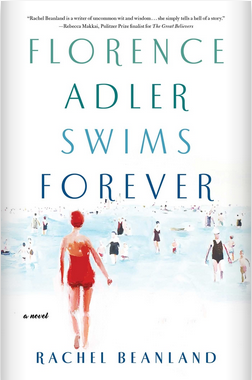 When people think of Atlantic City in the 1930s, some may immediately think of “Boardwalk Empire,” the HBO series depicting Prohibition-era gangsters and their flapper molls, gambling, and free-flowing booze. A glamorous location to be sure, but also one with a seedy underbelly.

Another more wholesome but equally intriguing side of Atlantic City emerges in Florence Adler Swims Forever, a debut novel from Rachel Beanland based on her own family’s history. In the early 1930s, Atlantic City was known to many as “the Jewish Riviera.” Families would gather here annually for sun-drenched vacations revolving around the city’s grand beach hotels.

Set in the summer of 1934, the story wraps around three generations of the Adler clan, illuminating their romances, marriages, and secrets. Parents Joseph and Esther Adler run a successful bakery and have two grown daughters, Fannie and Florence.

Fannie has gone the more traditional route for her era, skipping college to marry the ne’er do well Isaac Feldman. Although still a young woman, she is already mother to bright 7-year-old Gussie. She finds herself pregnant again soon after the loss of her second child and is ordered to remain in the hospital on bedrest.

In contrast to her older sister, Florence is a confident college student with dreams of being the next Trudy Elderle, the first woman to swim the English Channel, in 1926. Florence is ambitious, determined, and brave. Stuart Williams, heir to an Atlantic City hotel fortune and Florence’s local swimming coach, is secretly in love with her, but the reader never learns how Florence feels about him. She inexplicably drowns in the ocean while out for a casual swim.

Though Florence appears alive only in the first chapter, her presence permeates the book from start to finish. Each character is defined by their relationship to Florence. Her mother, Esther, vows to keep Florence’s death secret from Fannie, as she fears that truth will cause her to lose her baby. This is the secret and the burden the entire family and Stuart will carry for months.

During this tragic time, the Adlers are also playing host to Anna Epstein, a young German woman soon to attend college in New Jersey. Her mother, Inez, was an old flame of Joseph’s (a secret Joseph keeps from Esther). Joseph feels an obligation to help both Anna and her parents immigrate to the U.S. to escape the mounting persecution of Jews in Hitler’s Germany. Anna, as the objective outsider, provides us perhaps the clearest window into who Florence was. She also assuages Stuart’s grief over his lost student as a new romance sparks between them.

Florence Adler Swims Forever is old-fashioned historical fiction in the best sense. It envelops the reader in a time and place rich with detail and historical event. Atlantic City feels like a posh, insulated bubble far away from the Nazis. Nothing bad could happen here, one feels, until it does.

When Esther sees her daughter’s lifeless body, the same body she bathed as a child, she says, “She’s twenty, my beautiful girl is just twenty.” The reader cannot help but think simultaneously of Florence’s Jewish-German peers soon to be swept away by the waves of anti-Semitic persecution leading up to World War II.

Much of the imagery of the book revolves around water and drowning. Patriarch Joseph is not able to save Florence from the waves that engulf her. But he may be able to pluck Fannie from a tragedy about to overtake her by acting secretly on her behalf.

The chapters are each titled with a character’s name: Gussie, Esther, Fannie, Joseph, Isaac, Stuart, Anna. This sequence is repeated in each of the three sections: June 1934, July 1934, and August 1934. The kaleidoscope of viewpoints is tied together by this well-organized narrative structure, allowing the reader to easily follow the shifting emotions of each character, as well as how each comes to terms with their own grief over Florence.

Florence is such a vividly drawn character, with her red bathing cap and flapper insouciance, that one only wishes she could have stayed and been an active part of the narrative a bit longer. However, her strong personality suffuses the story with a joy for life that isn’t extinguished with her untimely death. She is a character who won’t be forgotten by her family and clearly one who inspired her descendants. (Beanland based the character of Florence Adler on her great-great-aunt, Florence Lowenthal.)

To honor her courageous spirit, Stuart, Gussie, and Anna form a secret club, the Florence Adler Swims Forever Society, where Florence remains eternally young, a “Queen of the Waves” like her heroine, Ederle.

The Clockmaker’s Daughter: A Novel