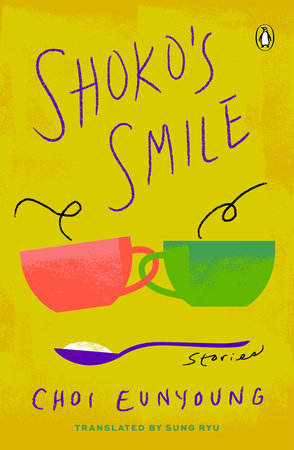 The seven stories that comprise Choi Eunyoung’s debut collection, Shoko’s Smile, are full of silences and absences, things left unacknowledged or unspoken. The reader — and occasionally the characters, as well — is left to puzzle out these gaps and infer as best they can what might belong there. Sometimes, this is possible. Often, it is not. The result is a powerful eeriness that animates the book.

For example, in the title story (the publication of which, in 2013, launched the author’s career in her native South Korea), the narrator, Soyu, looks back over her relationship with a Japanese exchange student, Shoko, who stayed in her home for a short time during high school. During her visit, Shoko develops a surprisingly warm connection with Soyu’s grandfather, who speaks to Shoko in Japanese, which, it’s implied, he learned during Japan’s occupation of Korea.

After she returns home, Shoko stays in touch with both Soyu and Grandpa via letters. But the accounts she gives of her life to each of them are diametrically opposed. To Grandpa, she sends pleasant, optimistic anecdotes. For Soyu, she paints a dark, distressing picture of familial dysfunction and psychic stress. The two seem incommensurable.

This might be curious enough, but back home in Japan, Shoko lives with her own grandfather, whom she utterly despises. The cause of her animosity is never clarified, nor is why Shoko never fulfills her ambition to leave her hometown for a career in the city. Nor, ultimately, why the narrator, despite being drawn to Shoko, also finds her ominous, and her smile — to which the story’s title refers — strangely chilling.

Similarly, in “Hanji and Youngju,” the narrator, a young Korean woman, develops an intense friendship with a Kenyan man she meets while both are volunteering at a monastery in France. At some point, their relationship goes wrong, and he stops speaking to her. But despite the narrator’s best efforts, she cannot figure out the cause of their estrangement, what she might have said or done to upset or offend her friend. The reader can’t, either. Instead, we are left with the gut-punch of that lost intimacy and no tidy way to reassure ourselves that the same thing wouldn’t happen to us under comparable circumstances.

A more obvious but still effective use of omission occurs in “The Secret.” An ailing, elderly grandmother reminisces about the granddaughter she raised, who supposedly left suddenly to teach in China several years before. The reader comes to understand, as the story progresses, that the granddaughter is not really in China. The family has hidden her true fate to save the grandmother unnecessary grief. But now, because the grandmother has lived far longer than anyone predicted — in part out of a stubborn determination to see her granddaughter again — they are trapped by their well-meaning lie, unable to explain why the granddaughter never visits, writes, or calls.

These stories manage to be both intensely intimate and pointedly political. Readers unfamiliar with recent Korean history will learn something about it by the time they’re done. In “Xin Chào, Xin Chào,” for instance, two expat families — one Vietnamese and one Korean — who’ve grown close while living in Germany are driven apart by the Koreans’ unwillingness to accept their own country’s complicity in the horrors of the U.S. war in Vietnam.

And in “Sister, My Little Soonae,” a woman has her life destroyed when her husband is charged with spying for the North and imprisoned during an anti-communist crackdown. We’re shown repeatedly and convincingly throughout Shoko’s Smile how the shadows of history continue to haunt and shape people several generations later and even in their most intimate moments.

In her homeland, author Choi is known for the plainness and directness of her style, and this comes through well in Sung Ryu’s translation. The translator has chosen to render the informality of some characters’ speech through spelling — dropping the g’s off the end of words and substituting “yer” for “your” and “a-crying” for “crying.” In places, this can be distracting.

It’s also true that some fairly major aspects of human experience are noticeably missing from the book’s purview. Sexuality, romance, and even strong marital bonds may have existed in the characters’ pasts, but they are more or less absent from their present-day lives.

But this is of a piece with the melancholy that permeates the collection, one punctuated by moments of startling insight, grief, and even joy made all the more affecting for how hard-won they are. There’s no question that this is a remarkable debut.

An intricately interwoven story about secrets and the unbreakable bond of sisterhood.