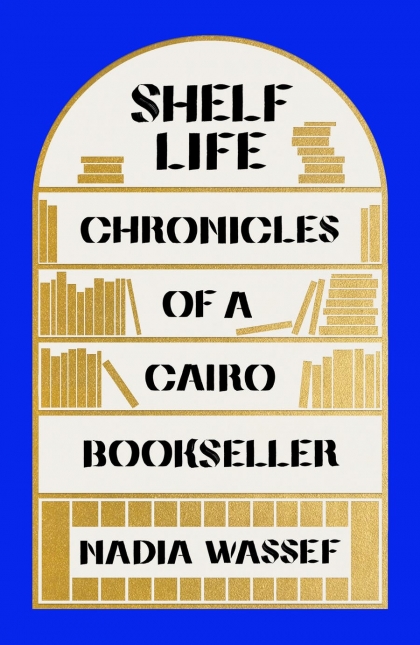 Imagine a group of friends sitting around chatting about what they most wish they could do. Two of them say, “Open a bookstore,” and by the end of the night, they decide to move forward with the plan, and the others agree to invest.

That scenario would be fraught enough if the group were in, say, Columbus, Ohio, or Harrogate, England, but the friends in question were in Cairo, Egypt, where culture and politics argued against success for an independent bookstore.

As described in Nadia Wassef’s engaging memoir, Shelf Life: Chronicles of a Cairo Bookseller, that did not deter the author, then 27, her sister, Hind, or their friend Nihal from opening their store, Diwan, in March 2002. They were, perhaps, too innocent to be intimidated, too blissfully ignorant to grasp all that they did not yet know.

Nadia and Hind’s mother came up with the store’s name, which can mean “a collection of poetry in Persian and Arabic, a meeting place, a guesthouse, a sofa…‘Diwani’ is a type of Arabic calligraphy.” A local artist, Minou, designed their logo, decorated their stores, and created a line of shopping bags for Diwan that became the only marketing the store ever needed:

“The Diwan shopping bag became a cultural status symbol on the streets of Cairo. In later years, when I glimpsed one of our bags on a London street, or a New York subway, the feeling was electrifying.”

Wassef’s chapters mirror sections of the bookstore — “The Café,” “Business and Management,” “The Classics,” “Self-Help” — and she uses them as a launch point to discuss so much more: cultural norms, politics and government, history, religion, and revolution, as well as business and personal struggles.

She describes Diwan’s concept as one way of influencing the cultural narrative through its organization and offerings. Throughout, the book highlights the challenges faced by three women operating a first-of-its-kind business in a paternalistic society mired in a bureaucracy administered by a corrupt and unjust government.

Along the way, her descriptions of family, friends, and employees, the zeitgeist of Cairo in the early 2000s, and the challenges that Diwan brought into her life all add a wonderfully intriguing, quirky flavor and bounce to the narrative. Wassef knows how to tell a good story, and her language is surprisingly spicy. (Her recounting of exchanges she had with Minou in Diwan’s café are eye-popping.)

The chapter “Egypt Essentials” explores, among other issues, the lasting mark on Egyptian culture and psyche of British and French colonialism, in which Egyptians find their own history being explained to them by colonizers who hijacked that history for themselves. As she says, “most Egyptian archaeologists weren’t even granted permission to excavate in their own country…The British Museum, which has the Rosetta Stone (and over fifty thousand other ancient Egyptian objects, making it the largest collection outside of Egypt), still refuses to repatriate it. Bastards.”

There is also an enduring class structure represented by, as Wassef explains, two Cairos: the one lived on the Egyptian pound, whose members struggle to remain above the poverty line, and the one lived on foreign currency, in which English and French are more frequently spoken than Arabic, and disposable income employs cooks and drivers — and buys books.

Wassef has a relatively clear-eyed view of her place in the latter camp, a product as she is of Egypt’s British International School, where speaking Arabic on school grounds was forbidden. She was late coming to her native tongue, in which the formal language, Fus’ha, is only written; spoken forms are unique to various regions of the Arab world. She realized that “Diwan’s readers were similarly dislocated from their roots and lost in linguistic migration. We didn’t want to punish them; we wanted to invite them in.”

One challenge in running a multicultural bookstore under a longstanding regime of government control of written content is the threat of running afoul of the censors. As Wassef dryly explains:

“President [Hosni] Mubarak was proud that under his governance, Egypt was a country free from censorship. This meant that we were permitted to speak or act as we chose, provided it was within the law. As law-abiding citizens, we knew that it was illegal to say, write, or print anything that offended public morals, threatened national unity or the social order, or tarnished Egypt’s reputation in the foreign press.”

Oddly, the book that was detained in customs as containing “titles deemed offensive to ‘public morals,’” and which initiated Wassef’s summons to the censor’s office, turned out to be a cookbook, Jamie Oliver’s The Naked Chef. (She notes that they would never dare to order certain books, such as Salman Rushdie’s The Satanic Verses.) Wassef’s male mouthpiece assures the censor that, as corrupt as Western society is, the title is not meant literally.

What’s perhaps most telling in the scene is that this educated, successful, outspoken woman — who regularly drops the F-bomb in casual conversation, even with her young daughters — realizes that she must have a man escort and speak for her; it would be impossible in this situation for her to speak for herself.

More disturbing is another incident Wassef recounts of a man who comes to meet with her to offer to franchise Diwan and yet refuses to shake her hand. The partners joke about the incident, but Wassef later realizes she should have recognized the sign of the deepening religious conservatism that was infecting Egypt.

It is in the chapter “Self Help” that Wassef discusses the most recent in Egypt’s long history of revolution and political upheaval. January 2011 saw the start of protests that led to Mubarak’s removal; unfortunately, the election in 2012 brought in Mohamed Morsi of the Muslim Brotherhood. By the time he was ousted the following year, Wassef was already planning to leave Egypt, and thus Diwan.

At its height, Diwan had 10 outlets, each one chasing and typically failing to capture profitability. In hindsight, Wassef realized that their first store stumbled into the perfect combination of flush customers and exceptional location, a lucky coincidence “impossible to replicate.” Still, though both Wassef sisters have given up their seats on the Diwan board, Nihal and a few other Diwan veterans have reinvigorated the brand.

Nadia Wassef has been away from store operations for about six years but notes that Diwan will celebrate its 20th anniversary next March. That’s a milestone that any indie bookshop anywhere in the world would celebrate.

Jennifer Bort Yacovissi’s debut novel, Up the Hill to Home, tells the story of four generations of a family in Washington, DC, from the Civil War to the Great Depression. Her short fiction has appeared in Gargoyle and Pen-in-Hand. Jenny reviews regularly for the Washington Independent Review of Books and serves on the Independent’s board of directors as president. She has served as chair or program director of the Washington Writers Conference since 2017, and for several recent years was president of the Annapolis chapter of the Maryland Writers’ Association. Stop by Jenny’s website for a collection of her reviews and columns, and follow her on Twitter at @jbyacovissi.

Not a Scientist: How Politicians Mistake, Misrepresent, and Utterly Mangle Science