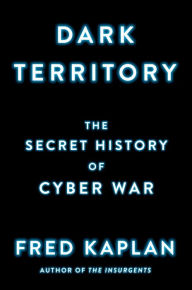 In Dark Territory, the Pulitzer Prize-winning journalist Fred Kaplan treats readers to a rich, behind-the-headlines history of our government’s efforts to make policy for the jaw-dropping vulnerabilities of our ever-increasing dependence on computers.

His story begins whimsically enough, with Hollywood’s release in 1983 – six years before the World Wide Web was even invented – of a sci-fi movie called “War Games,” which President Reagan screened at the White House for an evening’s light entertainment. In the movie, a whiz-kid teenage hacker played by Matthew Broderick breaks into the main computer at North American Aerospace Defense Command and, thinking that he’s just playing a video game, almost triggers World War III.

At Reagan’s next meeting with his national security staff, Kaplan reports, the president provoked surprise and even scarcely concealed amusement when he summarized the movie’s plot, then turned with a straight face to the chairman of the Joint Chiefs of Staff and asked, “Could something like this really happen?”

General Vesey promised the commander-in-chief he would check into it. When he reported back a week later, Kaplan writes, it was suddenly no laughing matter: “‘Mr. President,’ he said, ‘the problem is much worse than you think.’”

Three decades later, few Americans have been untouched by the work of hackers — email contact lists hijacked to send spam to friends; websites shut down by denial-of-service attacks; or more disturbingly, personal data scooped up in digital raids against companies like Target, Home Depot, JC Penney, and eBay. Governments, too, have hacked and been hacked.

Many readers are aware of Iran’s computer-run nuclear program, which was breached several years ago by a mysterious worm that forced hundreds of centrifuges to destroy themselves. Few, however, realize that late-model automobiles can be commandeered through their Internet-connected entertainment systems: brakes can be applied remotely, power steering disabled, and engines completely shut down.

Most of the software that runs power companies, operates trains, maintains bank records, and supports air traffic control is equally penetrable. If military communications are hacked, an adversary can intercept plans, disrupt weapons systems, or even issue false operational orders.

Kaplan renders a vivid account of the long struggle waged by presidents, bureaucrats, generals, private-sector CEOs, and privacy advocates to deal with the implications of Reagan’s question and the general’s answer. Should software companies be compelled to leave “back doors” in their programs to allow government cyber warriors to hack into the computers of suspected terrorists or unfriendly nations?

And to preempt possible attacks, should government have the authority to vacuum up data or “metadata” from everyone on the Internet? Is it true, as one intelligence chief argues in the book, that to find a needle in a haystack, you need access to the whole haystack, and can the citizenry trust government not to abuse such access? Are the alleged surveillance techniques revealed by Edward Snowden truly Orwellian, or are they just the price of survival in a connected world?

Decades after “War Games,” there are few answers to such questions, few internationally agreed “rules of the road,” and no infallible defenses against new forms of malware. These are among the reasons, Kaplan tells us, that former Secretary of Defense Robert Gates liked to call the cyber realm a “dark territory.”

The story is complex, however, and in telling it, Kaplan darts back and forth in time, often with lengthy biographical asides, leaving the reader awash in a sea of facts. Moreover, although the author shows policymakers facing danger with growing sophistication, there is a certain “Groundhog Day” quality to the recurrent cycles he describes of new commissions issuing new reports, leading to the creation of yet more new commissions issuing yet more reports — all saying, in essence, that the problem is getting worse and we aren’t doing enough.

While Kaplan cites ample documentation to convince readers he has done his homework, some of the more spectacular revelations, as the title suggests, are not in the public record, and to tell the story he provides his many interview subjects full anonymity. Kaplan enjoys considerable credibility in defense circles, but he guides us through the dark territory of cyber conflict with an omniscient-narrator voice reminiscent of Bob Woodward’s behind-the-scenes books. In the end, you either trust him or you don’t.

It is ironic that the Internet — which the military must now treat as a “battlespace” — is the American military’s own creation. Today, Kaplan argues, it is precisely U.S. pre-eminence in the network connectivity that makes us the most vulnerable target in the world to cyber sabotage.

Howard Davis is a former journalist and aficionado of spy stories both factual and fictional. The views expressed here are his alone and not necessarily those of the U.S. Government.

Gorbachev: His Life and Times

An accessible portrait of a decent, idealistic statesman.