Shakespeare for Squirrels: A Novel

This madcap recasting of A Midsummer Night’s Dream showcases the bestselling author’s range. 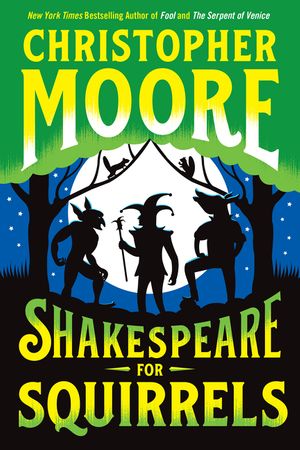 Both my editor and I are big Christopher Moore fans. So as I was reading his latest, Shakespeare for Squirrels, I contemplated a friendly wager with her on Moore’s motivation for writing this unique take on A Midsummer Night’s Dream.

I had two prevailing theories on why he’d written a novel where Shakespeare’s fairies turn into squirrels during the daytime. The first working theory was that Moore, who lives in San Francisco, was following in the footsteps of the old City Lights’ Beat Poet denizens and partaking of wine and weed in order to free his mind.

The second working theory was that he had bet his publisher — much like Dr. Seuss and the Green Eggs and Ham story — that he could write a book based upon a beloved Shakespeare play, but using squirrels.

I was absolutely convinced one of these was a winner. I was wrong.

In an informative afterword, Moore explains that he does his writing in a bucolic corner of the world outside the Bay Area with lots of squirrels, and he wanted to pay homage to the furry friends he so often watches as he writes.

Whatever the justification, it works. Kind of.

At this point, Moore has written 17 novels, many of them bestsellers, so the odds that a reader unfamiliar with him might start with Shakespeare for Squirrels is unlikely. But in such an instance, there are far better Moore “starters” than this bizarre take on the Bard.

That being said, fans of Moore and his incomparable wordplay will rejoice at having the jester Pocket of Dog Snogging — who debuted in Fool, Moore’s brilliant sendup of King Lear — return in yet another nutty take on Shakespeare.

The story begins when Pocket and his two constant traveling companions, the oafish Drool and the monkey Jeff, have worn out their welcome with a band of pirates and are cast adrift on the ocean. Famished and nearing death, Drool wants to eat Jeff, or at least squeeze him and drink his pee, but they are all so dehydrated they have not had to urinate in recent memory.

Just as they are about to give up hope, they spy land and are deposited on the beaches of Greece. Though Shakespeare did not employ a dehydrated monkey or a Drool in his original Quarto, Moore does stay true to the absurd geography that the Bard seemed to randomly pick out of his quill drawer in setting his play in Athens. (Most scholars agree that little is Athenian about the setting of A Midsummer Night’s Dream.)

Once ashore, the games begin. Pocket is “murdered” within a few hours of arriving, and Drool is taken hostage. Jeff is left to his own devices, generally trying to have sex with hats, in the tree canopy above.

Despite possibly being dead, Pocket remains the narrator and conductor of the day-to-day operations of Shakespeare for Squirrels and must unravel assorted tasks placed before him by the King of Athens and the Queen of the Amazons, who are soon to wed. The beloved sprite Puck has been murdered, and it is left to Pocket to find the killer and save the innocent Drool from the executioner’s axe.

Most of Shakespeare’s Midsummer characters make appearances in Shakespeare for Squirrels, including the half-man/half-ass who becomes Nick Bottom, and the rest of the “mechanicals,” who are to perform a play at the royal wedding:

“They were not gentlemen attired in togas, prosecuting a republic, and having each other up the bum, like proper Greeks, but hard-handed men, in leather and wool, each composed of wire and gristle into such sharp-jawed countenance as is shaped by hard work and lean diet. One roared like a lion and I pushed Drool behind a bush and bade him stay so as not to frighten the players.”

The play is still the thing, but this being Moore’s take, the players capture more than the conscience of the king, and Pocket’s directorial debut runs up a body count that rivals the final scene of Hamlet. Pocket himself concedes his plan may have had some holes:

“I confess, a wall of worry rises for even the most confident fool when he realizes his plot for saving the day lies with three squirrels, a troupe of earnest nitwits, a donkey-headed weaver, a silver-thirsty goblin, a notoriously unreliable narrator, and a hat-shagging monkey. And the narrator and goblins hadn’t even arrived yet!”

There is little risk that a spoiler will ruin the experience of this book for the casual reader or avid Moore fan. Good Pocket does not shuffle off this mortal coil in Shakespeare for Squirrels. He lives to play another day, though it does appear Moore has exhausted all the possibilities that Jeff the Monkey once offered.

As this merry band of fools rides off into the sunset, Jeff decides to remain behind with one of the fairies. After all, when she morphs into a squirrel during the day, they have great fun leaping from branch to branch.

So Jeff’s spot in the trio is taken by Cobweb, a fairy quite smitten with Pocket. Hence, a hat-shagging monkey is replaced by a fool-shagging fairy who is sometimes a squirrel. In the literary world of Christopher Moore, this is a harbinger of great things to come.