A rollicking, imperfect thriller that may play out better on the big screen. 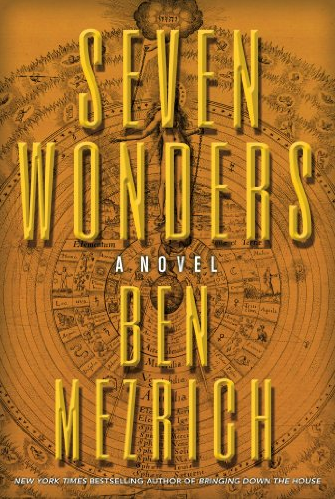 Ben Mezrich has become a not-so-accidental millionaire by chronicling the fabulously successful adventures of some very bright college students.

His 2009 book, The Accidental Billionaires: The Founding of Facebook, A Tale of Sex, Money, Genius, and Betrayal, followed Mark Zuckerberg from Harvard to fame and fortune in Silicon Valley and was the basis for the movie “The Social Network.” An earlier work, Bringing Down the House: The Inside Story of Six MIT Students Who Took Vegas for Millions, also became a movie, “21.”

Altogether, Mezrich has churned out a dozen books, mostly nonfiction, and is now returning to the fiction of his early career with a swashbuckling thriller that mixes Indiana Jones, The Da Vinci Code, mythology, and our childhood fascination with the Seven Wonders of the World into a highly readable concoction.

The original Seven Wonders included the Colossus of Rhodes, the Hanging Gardens of Babylon, and other structures that have largely vanished. Mezrich’s archeology hero, Jack Grady, is mostly concerned, however, with the so-called New Seven Wonders as he investigates the brutal murder of his twin brother, an MIT student who stumbled onto a possible conspiracy linking the contemporary wonders with the ancient ones.

Jack joins forces with an intrepid botanist, Sloane Costa, who simultaneously stumbles onto a surprising discovery in one of these new wonders, the Coliseum. Together, they follow clues leading them from one wonder to another in a veritable travelogue of adventure. They scale the Christ the Redeemer statue in Rio de Janeiro, enter the Taj Mahal through a secret underwater passage, and visit the other wonders in Peru, Mexico, China, and Jordan, collecting clues and trying to piece together the puzzle.

Many of these clues hint at the involvement of the Amazons (the mythical tribe of women warriors) in the conspiracy, as well as that of a shadowy organization behind the Amazons’ present-day heirs. As the pieces fall into place, the two intrepid scientists realize that they may have stumbled onto the secret of the Garden of Eden. On top of it all, a villainous, ambitious billionaire is pursuing the secrets of power and perhaps immortality for her own ends.

If all this sounds like a lot to cover in the confines of 314 pages, it is. While some of the wonders are rendered in vivid detail, others get a bit sketchy as the heroes race around the world one step ahead of their nemesis, even as they are pursued by a female warrior with deadly ivory javelins.

Needless to say, there is not much room for character development. Jack and Sloane remain largely two-dimensional, and Jack’s graduate-student assistants are so generally absent, you wonder why the author bothered to mention them.

That said, there is lots of adventure — scaling walls, dropping into pits, swimming underwater, dodging booby traps — of the kind familiar from the Indiana Jones movies. Given his success in Hollywood, Mezrich no doubt intends for this to be a movie, too (conveniently, all the modern wonders are still in existence and very cinematic).

The action climaxes in a visit to the Giza pyramids in Egypt, the only ancient wonder still standing. The denouement offers more thrills and, not surprisingly, sets the stage for a sequel (or two; a trilogy is planned).

Mezrich’s straightforward prose is largely equal to the task of depicting the action and adventure. His settings, as noted, can be quite vivid, and the combination is unquestionably entertaining — if you’re into this kind of thing.

Even so, you might want to wait for the film. The bald descriptions and vague characterizations miss the pizzazz and self-irony that come with Harrison Ford’s embodiment of the archeologist-adventurer, and Christ the Redeemer is surely more impressive on film than in our remembered visions of it. By the same token, the clues here are simple ones, lacking the intellectual sophistication of a Dan Brown book.

Mezrich’s nonfiction has been criticized for being a bit loose with the facts, but he clearly has a talent for latching onto a good story. If his earlier books are guilty of too much fiction, the chief flaw of this novel may be it has too little.

Darrell Delamaide is the author of the historical thriller The Grand Mirage and the financial thriller Gold. He lives in Washington, DC.