The author dishes up another helping of slapstick supernatural craziness. 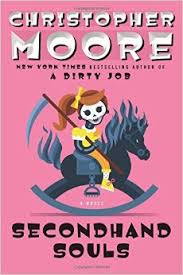 The newest fix for Christopher Moore fans has arrived. Secondhand Souls is the wacky sequel to A Dirty Job, in which archetypal beta-male Charlie Asher becomes a Death Merchant. He’s one of many Merchants who follow their self-updating ledgers of names and collect the souls of the deceased in objects such as shoes, books, records, etc.

In A Dirty Job, Charlie and his ragtag band of friends battle the Forces of Darkness and keep them from taking over the world. At the beginning of Secondhand Souls, the planet is still intact, but Charlie faces an obstacle to continuing his Merchant trade: His soul has been transferred into a 14-inch-tall creature assembled out of turkey ham and spare animal parts by his girlfriend, a Buddhist nun named Audrey. Now Charlie has a crocodile head, duck feet, a lunchmeat torso, and a 10-inch-long penis that causes him to faint when he gets an erection.

Charlie’s 7-year-old daughter is precocious and disarmingly foul-mouthed — and also happens to be the Luminatus, a supreme agent of death who can kill by uttering the word “kitty.” Her dominance keeps the previously defeated powers of the underworld at bay. But when her “goggies” (the two pony-sized Hellhounds that protect her) disappear, Charlie suspects she may be losing her potency.

The missing Hellhounds, plus the appearance of a banshee and three shadowy, murderous raven-women, point to a growing imbalance between the worlds of the living and the dead. Charlie, Audrey, and the returning cast of Death Merchants, cops, and a Goth teen must band together again to find a new body for Charlie and take on the otherworldly creatures threatening to destroy life as we know it.

As a fan of Douglas Adams, Monty Python, and Mel Brooks, I’m down with silly, circuitous humor, and can pinch my nose through a liberal dose of potty humor to get to the clever stuff. I read and loved Moore’s The Stupidest Angel years ago, so was looking forward to Secondhand Souls. And as I read, I kept waving through the jokes about Audrey’s “boobies” and Charlie’s “10-inch-schlong,” wanting to love the book. But while it was amusing, it wasn’t what I would call a standalone pleasure.

Moore attempts to orient the reader by harking back to situations from A Dirty Job. Yes, Souls’ convoluted world does require grounding, but its momentum suffers under the weight of frequent references to the previous book. I often felt like I was listening to someone recount a funny conversation going on in the next room, wondering why I shouldn’t just go in and hear it firsthand.

That said, Moore has a true talent for setting a scene:

“A great regret of ghosts lingered on the Golden Gate Bridge. Mad as bedbugs, they slid down the cables, swam in the roadway, hung off the upright lines, whipped in the wind like tattered battle flags, dangled their feet off the anchor piers, and called into the dreams of sleeping sailors as their ships passed through the Gate. Mostly they napped, curled up in the heavy steel towers, entwined together in the cables like impassioned earthworms, tucked under an asphalt blanket snoring into the treads of a million tires a day.”

Several more enchanting lines follow. The inventiveness of this description is a delight, and the story of the bridge painter and the spirit he falls in love with is intriguing. But that’s only one thread of a somewhat cluttered tapestry.

Moore’s writing chops are so solid it can feel like he’s pulling punches when he caps a gripping sequence with a one-liner or a gag. In this instance, he grabs the reader with a suspenseful battle between the little soul puppets like Charlie (the People) and the raven-women wraiths, only to break the spell with a throwaway line:

“Nemain impaled two of the People on her claws and they screeched piteously as she bit into one’s torso, and the other squirmed on her talon, the light of its soul dimming in an instant. Macha dropped from the ceiling like an inky blanket and fell upon a half dozen of the People, gathering them in a death embrace, crushing them. Bones cracked, splintered, four souls went dark. Macha stood full form in the middle of the parlor, holding one of the People in each hand, gore dripping down her face and chest.

“The People scattered, running for every exit…Theeb stuck her in the ankle with his spork.

Yes, mixing the grand and the trite is Moore’s thing — and sporks are always funny — but it seems a shame to spoil such a cracking battle with an easy banality. Perhaps it would feel fresher and funnier if Moore were a little less dependent on the same technique (and the word “fuck”) throughout.

Moore’s characters are comic caricatures, sometimes skirting the edge of advisability (example: a couple of smooth, street-talkin’, sharp-dressin’ black men named Minty and Lemon who don’t refrain from using the n-word and seem like they were written for Samuel L. Jackson to play). But if you can get past that, there are many moments of brilliance.

One hilarious example is Lily Darquewillow Elventhing Severo (“the Darquewillow Elventhing was silent”) and her utterly craptastic technique as a suicide-prevention counselor. After telling a client about to jump off the Golden Gate Bridge that he has to live so he can try foods like cereal with chocolate inside, she launches into an insane ramble about a squirrel in a top hat and tap shoes battling a pigeon over a custard donut on the sidewalk (“There are ants on your donut, Kevin.”), then winds up telling him to go ahead and jump (“Geronimo!”). He ends up so confused he doesn’t do it.

Diehard devotees of Moore are sure to enjoy Secondhand Souls' madcap plot and zany characters. But if you haven’t read A Dirty Job, that might be the place to start. Then decide if you’d like a second(hand) helping with the new book.