Searching for John Hughes: Or Everything I Thought I Needed to Know about Life I Learned from Watching ‘80s Movies

A (mostly) likable memoir about a young writer struggling to succeed. 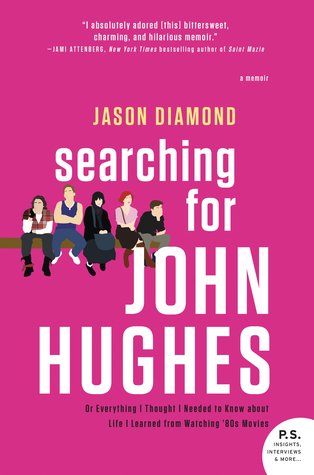 Being born in 1971, I pretty much grew up with John Hughes films. I still remember where I sat in the theater for “Sixteen Candles,” who I went to see “Ferris Bueller’s Day Off” with, and having to wait impatiently in my living room for the Christie Brinkley pool scene in “National Lampoon’s Vacation” every time it showed on HBO, which wasn’t often enough.

Judging by its title, I expected Jason Diamond’s Searching for John Hughes: Or Everything I Thought I Needed to Know about Life I Learned from Watching ‘80s Movies was going to be a love letter to the man whose characters kept me company throughout junior high and high school, and who cornered the market on teen movies in the 1980s. And, in a way, Diamond’s book is that.

Diamond, a former Chicagoan like Hughes, fills his book with analysis and memories of the movies he grew up with and wanted to live in. But while the book is somewhat Hughes-centered, it’s more the story of an artist looking for his voice and his focus, something I think all creative types wrestle with.

Diamond, who describes himself as a “cross between Duckie from Pretty in Pink and Allison from The Breakfast Club,” spends the first half of the book recounting his tumultuous early years — being kicked out of his mom’s house, crashing at friends’ places and in the spare bedroom of a kind teacher, and eventually moving to New York, where he works menial jobs.

During that period, he also spends a lot of time in coffee shops writing, struggling to decide exactly what it is he wants to create. Diamond readily admits longing to be a “hot shot who got invited to parties in incredible Upper East Side apartments with people who take of their glasses, hold them in their hands, and wave them about like a wand while they say really heavy things about the world.”

Unfortunately, he’s not sure how to get there. It’s during a serendipitous meeting with a childhood friend that Diamond blurts out the lie that gives his writing focus: “I’m writing the unauthorized biography of John Hughes.”

What follows is a lot of research and note-taking and theorizing on Hughes’ motives and creative processes in making movies like “Home Alone” and “Some Kind of Wonderful,” while Diamond scrambles to the pay the bills.

He works on the Hughes biography for years, and sections of it are included here. But eventually he abandons that project for various reasons I won’t spoil, and uses the experience and the lessons he learned as the inspiration for Searching for John Hughes.

This book, while Hughes-centered in places, works best as the story of a budding artist trying to find his way. It’s about turning failure into success, which in a lot of ways is what John Hughes’ movies are all about, a fact not lost on Diamond.

It’s an enjoyable read for the most part, but also not without its flaws. I got increasingly frustrated at the several near misses with meeting Hughes and the many moments where Diamond backed out of talking to people with real ties to the filmmaker.

In the end, though, Diamond comes off as a likeable guy you hope succeeds. Searching for John Hughes is a book not only for fans of Hughes’ movies and 1980s pop culture, but also for any creator out there looking for hope and inspiration.

Kurt Dinan is a high-school English teacher and writer living in the suburbs of Cincinnati. His debut novel, Don’t Get Caught, a young-adult caper novel, steals, er, borrows liberally from “The Breakfast Club,” but don’t tell anyone.

Raif Badawi, The Voice of Freedom: My Husband, Our Story

A harrowing account of the price of freedom in Saudi Arabia.

A compelling look at some of the people whose lives changed the law of free speech and the First Amendment.