Irish millennials move endlessly together and apart in this sometimes slow tale of love, class, and growing up. 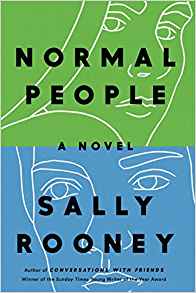 Author Sally Rooney burst on the scene in 2017 with her first novel, Conversations with Friends (longlisted for the 2018 Man Booker Prize). She returns now with Normal People, a millennial contribution to the tradition of coming-of-age stories.

The novel follows Marianne and Connell over a period of four years. The pair of unlikely friends and sometime lovers meet in secondary school in their small Irish town and go on to university in Dublin. The on-again, off-again relationship continues and grows ever more complicated.

Bright Marianne is a loner, an ugly duckling who completes the usual metamorphosis into swan, a poor little rich girl with the trappings plenty of money can buy but the emotional poverty of a loveless home, a cold, widowed mother, and an abusive brother. She’s exquisitely sensitive to slights and praise and easily drawn in, with an almost fatal appetite for damage:

Equally intelligent but more even-keeled, Connell is a popular athlete, a much-loved only child. His young, single mother is Marianne’s mother’s housekeeper. Kind and careful to a fault, Connell is always aware of his provisional place on the social and economic ladder:

“Now he’s here, standing on his own in a crowded room not knowing whether to take his jacket off. It feels practically scandalous to be lingering here in solitude. He feels as if everyone around him is disturbed by his presence, and trying not to stare.”

Marianne and Connell’s tentative, secret friendship blossoms into a love affair beset from the first by obstacles of class, money, and — most obstructive — personality. Over the course of almost 300 pages, Marianne and Connell are, at times, best friends, passionate lovers, antagonists, critics, and supporters.

They ricochet back and forth between one another and other partners. Marianne is drawn to hurtful and abusive partners (the nature and extent of her past family trauma is not clear but casts a long shadow); Connell remains her long-suffering admirer. Infected with a severe case of not being able to live with or without the other, they keep returning to each other and the legacy of childhood history in their hometown.

Rooney’s writes in spare and forceful present tense. The story is told in brief chapters, alternating the couple’s points of view. Progression from scene to scene is heralded by chapter headings which anchor events in very specific time: month, year, date, sometimes even the exact moment: “Five Minutes Later, July 2014.”

This structure — digital time rather than analog — reflects the way the characters live, and the effect as the reader turns the pages is almost like following the quickly shifting scenes of a movie or telenovela.

However, Normal People depicts the journey to adulthood not just with its highs and lows, but also with plentiful periods of repetitious tedium. The atmosphere of waiting for something to happen, to grow up, to change, is rendered so vividly that the reader (like a youthful character) may become impatient. The prose is brisk, but the novel feels longer than it is.

Normal People summons memories of other coming-of-age stories, such as John Knowles’ A Separate Peace, Françoise Sagan’s Bonjour Tristesse, and the brilliant independent film “Eighth Grade.” When Connell (somewhat abruptly and unexpectedly) discovers his vocation as a writer while a student in the rainy streets of Dublin, James Joyce’s Portrait of the Artist as a Young Man comes to mind.

Still, such stories (on and off the page) offer inherent challenges. The protagonists are often self-involved, sometimes obsessive about caste, pecking order, crushes, and heartbreak, experiencing both the exhilaration and the disillusionment associated with change and growth. Rooney has doubled these significant challenges here by choosing to tell the intertwined, overlapping stories of two young people: hyper-difficult Marianne and uber-mild Connell.

Perhaps in intentional rebellion against her topic’s conventions, the author restricts the arc of Marianne and Connell’s growth and the arc of their story. By novel’s end, both characters begin to understand self and other a bit more. But it is a partial understanding, with a realistic note of irresolution, leaving the future to be determined.