Saving Us: A Climate Scientist’s Case for Hope and Healing in a Divided World

Take heart, and then take action. 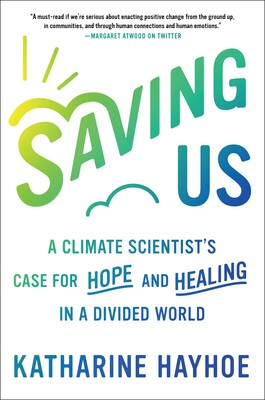 Climate scientist Katharine Hayhoe is anti-panic. In a summer when smoke from western wildfires sullied DC skies and an unprecedented heat dome cooked mussels in their Canadian seabeds, she recognizes the dire fix we’re in but finds hope amid the starkest of trendlines.

Others, understandably, clang alarm bells over the latest Intergovernmental Panel on Climate Change report, which declares a “code red for humanity.” But Hayhoe chooses to emphasize the power of the document’s crystal-clear findings to spur action, writing that there’s “no more equivocation, no uncertainty for opponents to climate action to hide behind.”

Yet Hayhoe, widely esteemed as a climate communicator, is too savvy to believe data will silence most deniers. Host of the award-winning PBS series “Global Weirding,” professor at Texas Tech, and author of more than 100 peer-reviewed papers, her first solo book is Saving Us: A Climate Scientist’s Case for Hope and Healing in a Divided World. Based on a TED Talk with nearly 4 million views, it turns all her skills toward informing and galvanizing others to join her crusade.

Deeply aware of the situation’s urgency, she wastes no time with handy tips on switching light bulbs or ditching plastic straws. Instead, this heartfelt and empathetic book focuses on shared values — grounded in but not limited to her own evangelical Christian faith — to build essential bonds and the courage required for the work ahead.

She says that revealing herself, the daughter of missionaries and wife of a pastor, as a climate researcher felt like “coming out of the closet.” A non-confrontational style and warm smile have not protected her from heckling at pulpits and podiums, or harassment and death threats on social media and at home. Always forthright, she interprets Scripture as directing humans to take responsibility for their own actions, fossil-fuel consumption included. Nowhere does her Bible say churchgoers are exempt from the laws of physics.

Her practical response to critics’ attacks, shared in Saving Us, is a polished set of cogent replies to “zombie arguments” — Blame volcanoes! Sunspots! China! — deniers won’t let die. More profoundly, tales of responsive local and international audiences animate a key point: “Whoever you are,” she insists, “you are the perfect person to talk about climate change with others who share your interests and values.”

Physical-science expertise will be less important to readers here than some acquaintance with statistics. Much of the research discussed derives from social sciences, such as the Yale Project on Climate Communication’s pivotal survey series, “Global Warming’s Six Americas.” From chapter one, Saving Us rests on the proposition that climate-change attitudes range widely — from alarmed to cautious to dismissive. Communication strategies must be adapted to honor diverse perspectives, beginning with the most crucial step: listening.

To illuminate the challenge, Hayhoe recounts showering an uncle on the dismissive end of the spectrum with evidence that carbon dioxide traps heat (proven in the 1850s) and fossil-fuel combustion is burdening the atmosphere with carbon (shown since 1958 in the Keeling Curve).

His response was to double down on his original points. “I had fallen right into the trap,” she admits, “of believing that my facts would convince someone whose identity is built on rejecting climate science.” It’s a test of Hayhoe’s own optimistic view that everyone can be reached. As she admits, “Unfortunately…[dismissives] are the only ones we usually can’t.”

Through storytelling and figurative language, Hayhoe disarms critics who would derogate her as a hectoring tree-hugger or a sentimentalist more concerned with birds and butterflies than injustice, economics, or national security. Why worry about a two- or three-degree rise in global temperature, these critics might ask, in light of all the real problems in the world?

For one, an extended metaphor about human body temperature clarifies how a once-stable system in energy imbalance threatens that system’s future. And woven throughout the text, stories reveal how extreme weather already imposes suffering on vulnerable communities and exacerbates wealth disparities, refugee crises, urban violence, and biodiversity collapse.

Yet by generously sharing the tales of scientific colleagues, clergy, farmers, teachers, parents, and more, the book proclaims a broad community of people alarmed at the consequences of fossil-fuel emissions who refuse to be silenced. Talking — to friends, family, politicians, business leaders, neighbors, and everyone you meet — matters because “connecting with others imbues us with a stronger sense of collective efficacy and builds a network of like-minded people.”

What should you talk about? Saving Us has an actionable answer for that, too. Hayhoe confesses a rare flash of anger while listening to one of Stephen Hawking’s final talks, when he argued the solution to climate change is terraforming Mars. Even if a few thousand humans could persist there, she fumes, billions of people and other life forms left behind would suffer and perish on an uninhabitable Earth. With the exception of God, everyone and everything she loves is in this world, and this is the place we need to transform.

What do you love? Children, great food, snow, political freedom? Those, too, are at risk on a once-stable globe, where the jet stream now wobbles, and the gulf stream threatens to shut down. We won’t succeed, Hayhoe contends, by blaming, shaming, or proving anyone wrong. Instead, she writes:

“We have to start with something we both agree on: bonding over a value we truly share, and then explaining the connection between that value and a changing climate.”

Read this vital book and take its exigent message to heart: Focus on what you love and talk about it. Daily. Your authentic voice is the one we need to save our precious — and only — home.