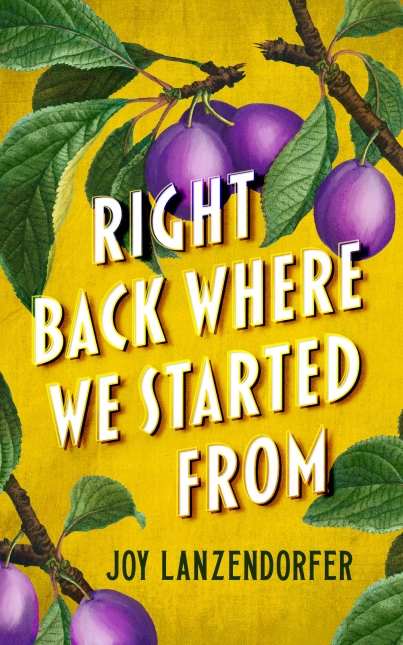 Joy Lanzendorfer’s Right Back Where We Started From is a vast historical narrative that takes the reader through a century of California history — from the Gold Rush through the end of World War II — as experienced by three generations of determined, ambitious women.

At the beginning, we are introduced to Sandra Sanborn. It’s 1932, just as the Depression is tightening its grip on the country. She’s landed in Hollywood and intends to make it as a starlet:

“There was no doubt in Sandra’s mind that she had ‘It,’ that illusive star quality the magazines were always talking about. Success was in her blood. She came from a long line of prosperous people, including her father, Arthur Beard, who headed an agricultural empire selling prunes across the nation.”

Despite her confidence in her exceptionality, Sandra is vague in her plan to actualize her dream beyond being “discovered by a director, producer, or other powerful studio man.”

For her, success is predetermined — it’s in her blood, after all — and it’s just a matter of time before she, too, will waltz into fame and fortune. However, it isn’t long before Sandra receives correspondence from a mysterious stranger that forces her to question her entire personal history and identity.

We soon learn that she isn’t the only one in her family ever to have felt she deserved more than what circumstances laid out for her. From Sandra’s story, the fast-paced narrative transports us back 80 years to Portland, Maine, where we meet her grandmother Vira, a young woman who narrowly misses being struck by lightning and is rescued by Elmer Sanborn, whom she will soon wed.

Up until that point, “All Vira had expected from life was to marry a respectable gentleman and raise a family in good society. When Elmer saved her from the lightning, she became convinced he was that man — tall, strong, wealthy, the son of a banker, the nephew of a judge. The lightning strike was a romantic catalyst that had thrust them together, and a long, fruitful partnership would naturally follow.”

But Elmer has dreams of his own. He plans to head out West to pan for gold, which sounds beyond reckless and risky to Vira; it sounds like a pipedream that will cost her her “rightful” place in society.

Decades later, there’s Mabel, Vira’s rebellious daughter and Sandra’s bitter mother, who reminds Sandra not to worry about anything because “your Mama will always tell you the truth.” But will she? All three women are hiding secrets that eventually cause them to question who they are, what they want, how they’ll snag it, and at what cost.

Lanzendorfer paints a vivid portrait of California’s history, which is the novel’s strength. As a reader, I loved being immersed in the Golden State’s cultural and environmental richness: the gritty beauty of San Francisco at the turn of the 20th century, the gin-soaked Hollywood parties during Prohibition, Healdsburg’s lush plum orchards, and the specter of women collecting steel during the war effort in the 1940s. These fascinating details don’t disappoint.

The book’s main characters, however, are difficult to root for. All three women, in their own way, are selfish, entitled, materialistic, and seem only interested in wealth and status. None of them appear to care about anything that doesn’t benefit them personally. Even their friendships are transactional.

As readers, we’ve been conditioned to give similarly self-centered male characters a pass; their bald-faced striving can almost subconsciously get rebranded as singular, admirable focus. Female characters are rarely extended the same courtesy — a point Lanzendorfer may have been trying to make.

Through the story of the Sanborns, she is showing us how women during those times, like men, could connive to achieve the American Dream without apologizing for it. That doing so involved endlessly grasping for money and power reveals just how relentless, twisted, and ultimately futile that dream was.